The Piedras Blancas Lighthouse is north of Hearst Castle in the small town of San Simeon. The historic lighthouse is beautiful and is accessible via guided tour only. The tours happen twice a week, and I was able to take one on my last visit. It was a fun time exploring this old lighthouse, but it did take almost three hours, so know that going in. Here is all the information. 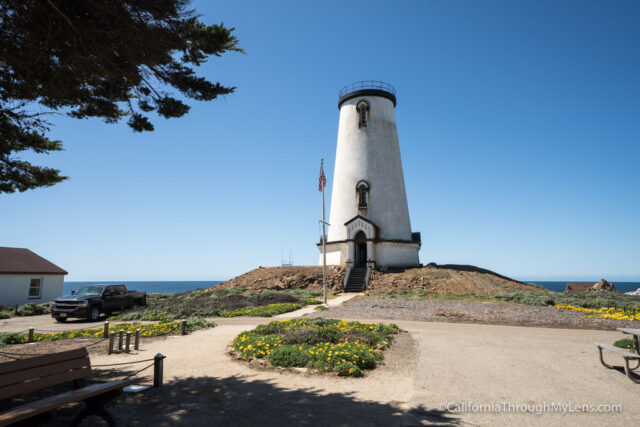 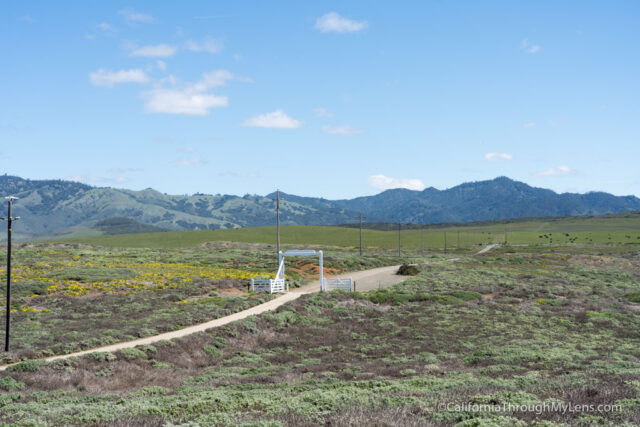 For the tours, they usually ask you to meet at the old motel in San Simeon (check your email with your tour confirmation to be sure though). From there, you caravan over to the lighthouse, and they open the gate to let you in. You will then proceed to the parking lot and start the tour. 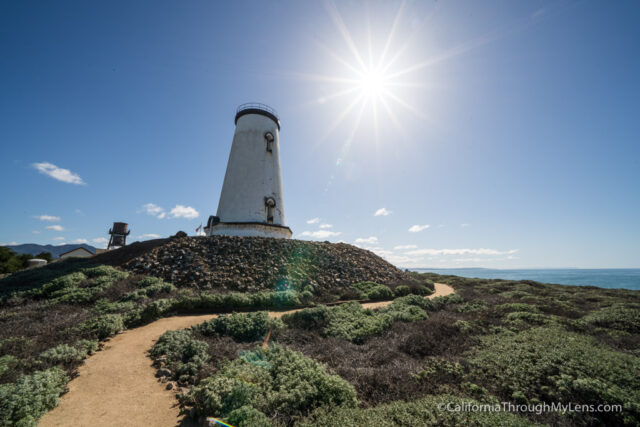 We were broken into two groups of 8 or so, and both groups set out to explore different areas. 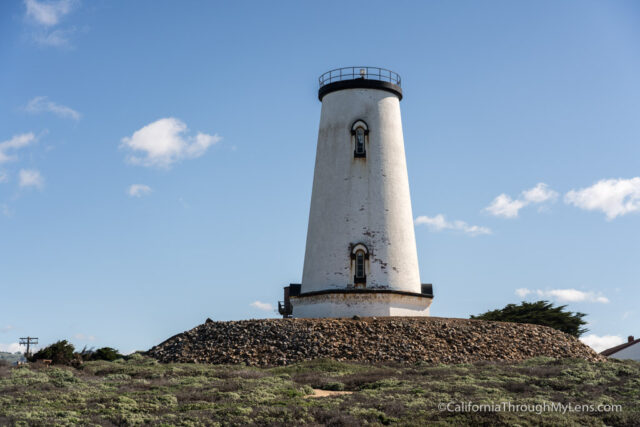 We started near the old lighthouse, learning about its past and the history of the region. 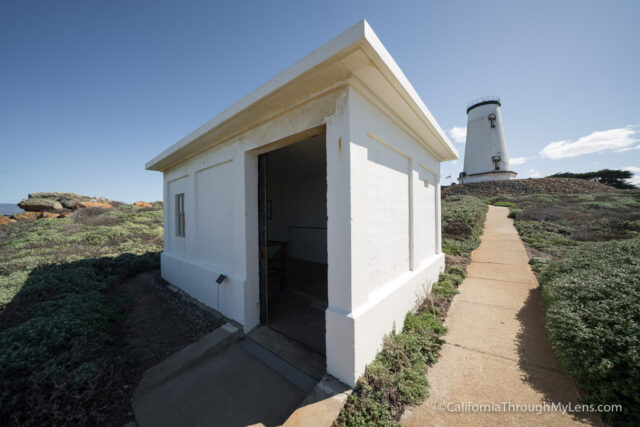 From there, we headed into the old cement building, which is one of the oldest buildings on the coast, even though it doesn’t look like much. 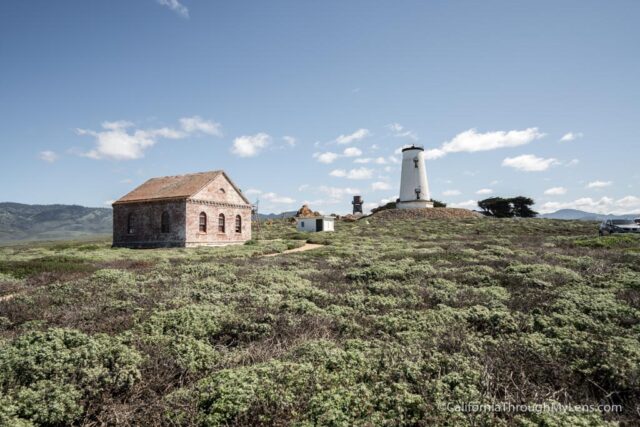 Next, we headed across the small road and went into the old shed that they were repairing. This is a beautiful old brick building, and it had a bunch of historic photos of the lighthouse. 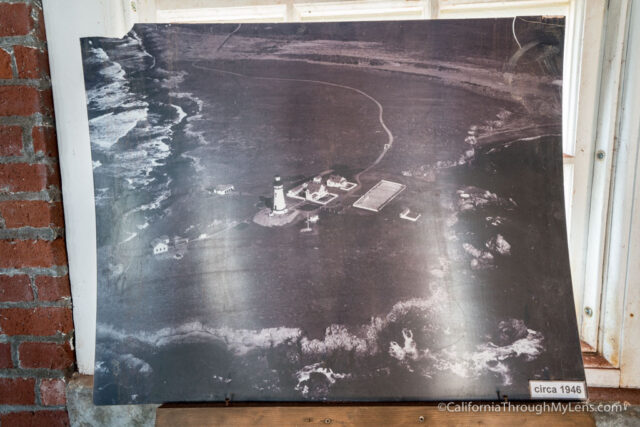 Our guide told us about how each lighthouse had a different light combination so that ships knew which one they were near. I had never thought about this before, but it made sense as it would hard to know where you were on the coast without distinguishing features like this. 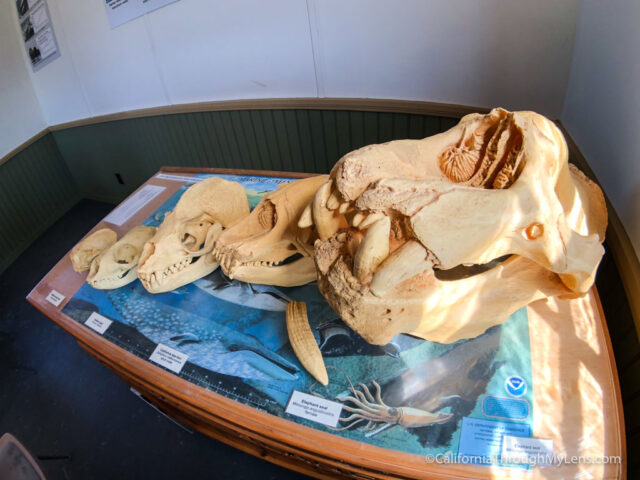 There was also another small building next door where we talked about the animals that live in the area, and we got to see the skull of an elephant seal, which was pretty crazy. It was so big! 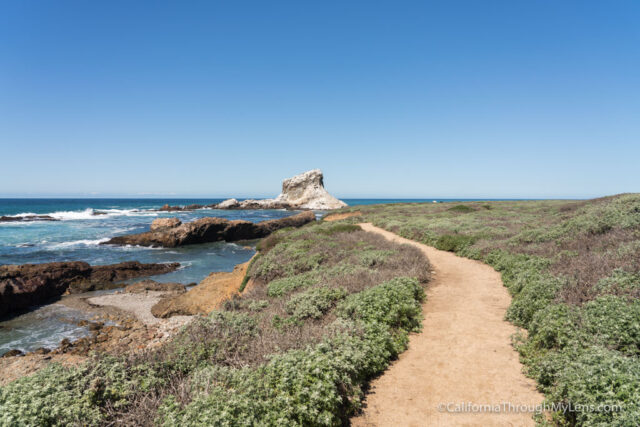 The tour continued on a small path that walked around the peninsula. 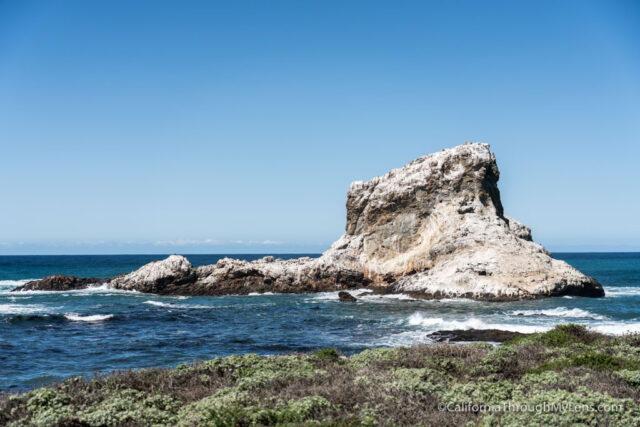 This is a beautiful area, and it was whale season, so we stopped many times to look for whales. 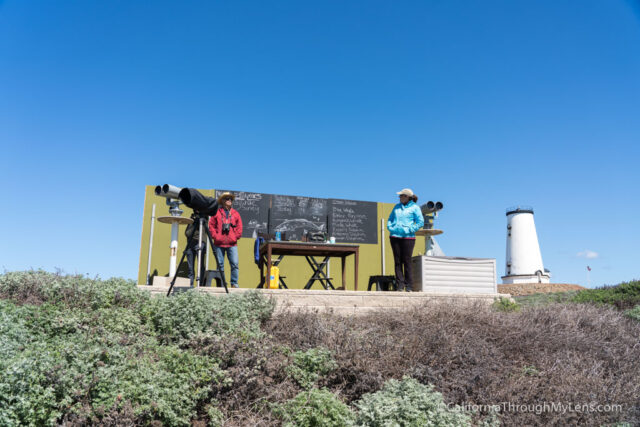 There was a group that was tracking whale migrations when we went, and they had already seen six that day. Whale season is usually from April to May in this area. 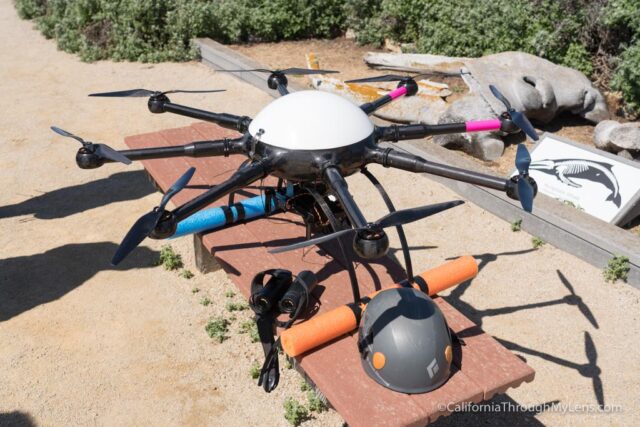 They also had a massive drone for taking photos of the whales to catalog. 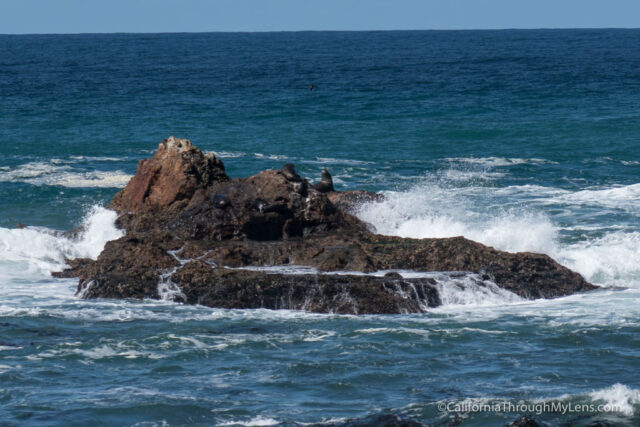 The path continued and provided great views of the coast. You could even see elephant seals sunning themselves on the shore in the distance. 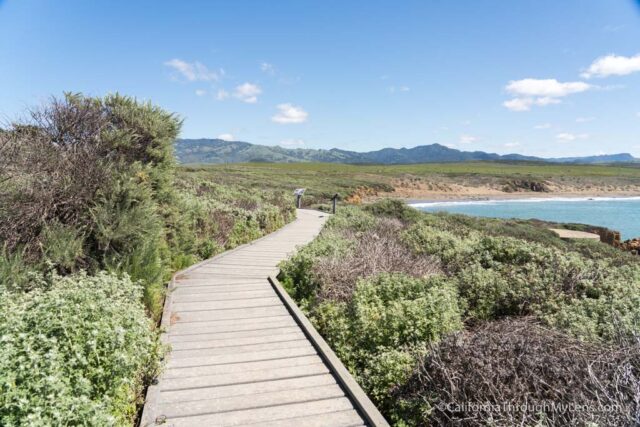 We then headed up to all of the old buildings, stopping first at the water tower. 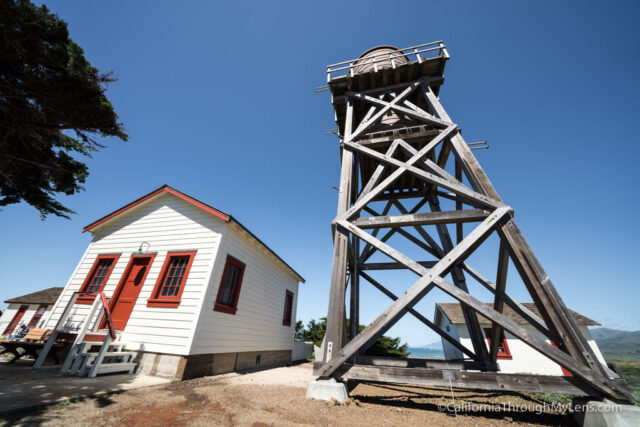 This tower is a replica that was rebuilt less than ten years ago, but it looked really old. 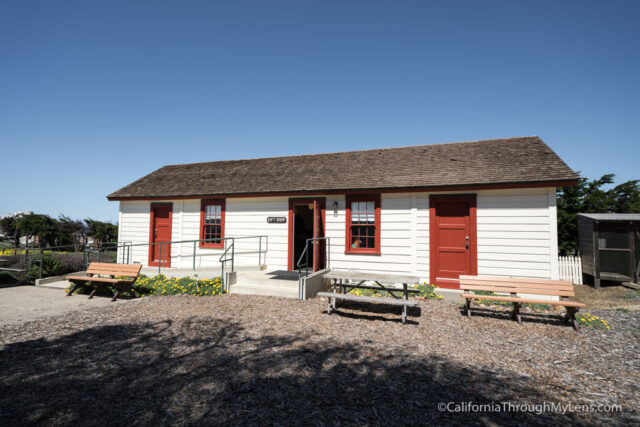 There is a small gift shop here that you can get a souvenir at as well. 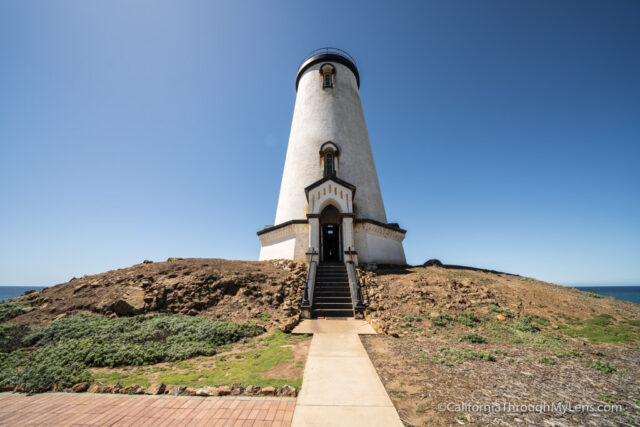 Lastly, we headed into the lighthouse itself. 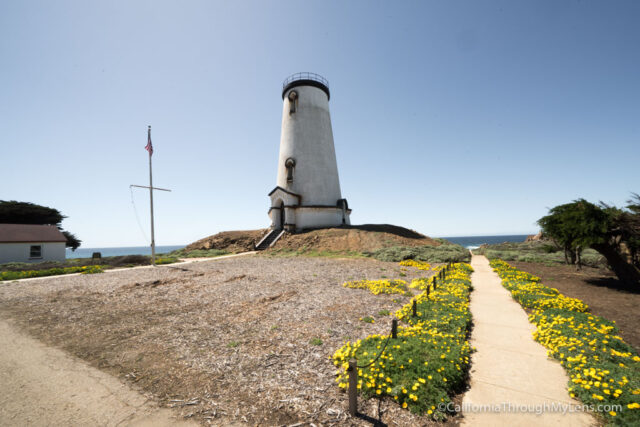 This lighthouse is 120 feet tall, and it took six months to build in 1875 with over half a million bricks. 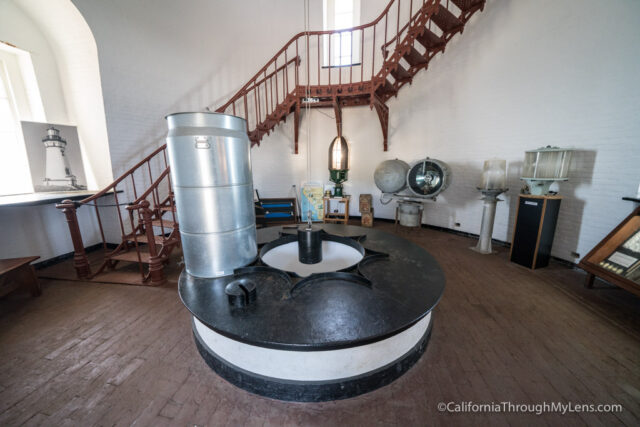 You can’t walk up to the top as it is not safe, but you can walk into the bottom floor. 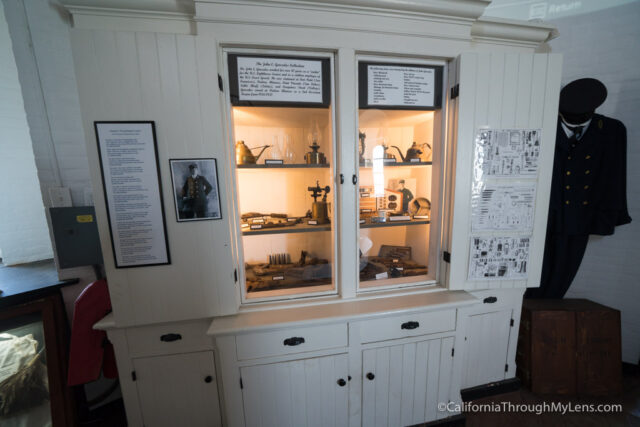 The bottom floor had a bunch of plaques with information on the keepers and what life was like for them. 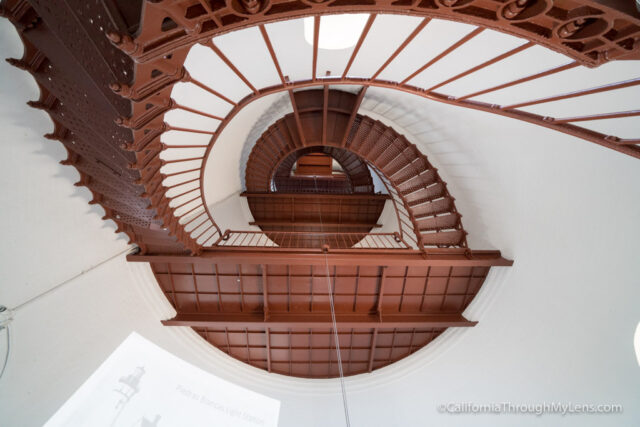 They also had examples of the different types of lights used at the lighthouse and a bunch more stuff to check out. I wished we would have spent more time here as it was one of the more exciting spots, but we had to leave pretty quickly. 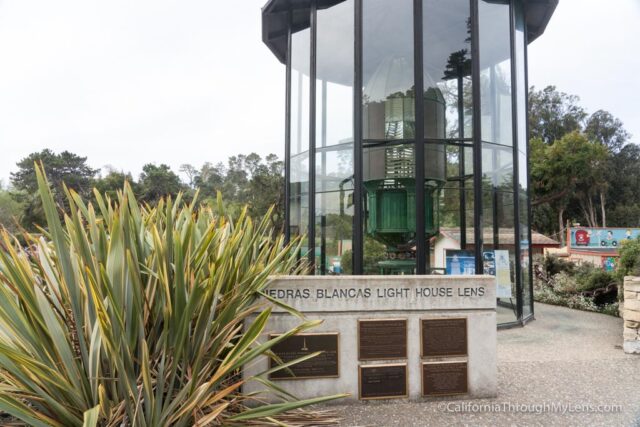 If you want to see the actual light, be sure to stop in downtown Cambria where they have it on display.