When exploring Lassen Volcanic National Park and hiking Lassen Peak, we decided to also hike Bumpass Hell, one of the park’s most well-known attractions. Bumpass Hell was named after Kendall Vanhook Bumpass, who stumbled on this area in the late 1800s while he was hiking. It is called Bumpass Hell because he fell in one of the steam geysers and ended up losing a leg. This is a geothermal area that has many steam vents that continuously pour out steam and sulfur gases from the molten lava, which is running five miles below. The forest ranger there told us some of the water is so acidic it is like stomach acid. This is a beautiful hike though, read on for all the information. 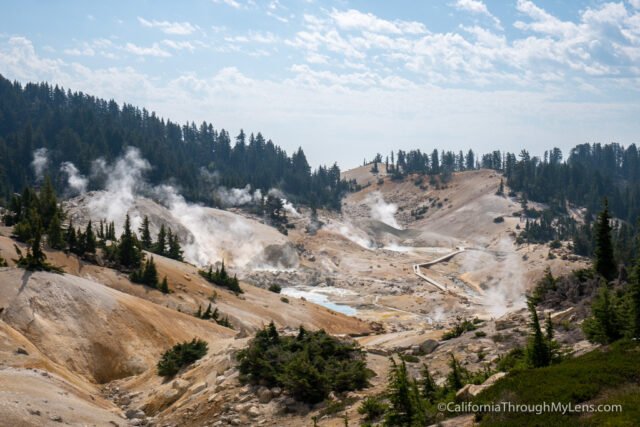 The hike to this area is 3 miles round trip and should be relatively easy for most people. The Bumpass Hell area is certainly something that should be experienced in the park. Even though you have to smell the sulfur, the site is unlike anything you have seen in California. 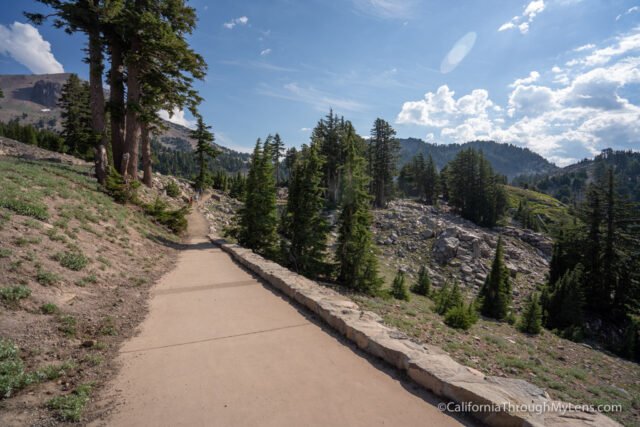 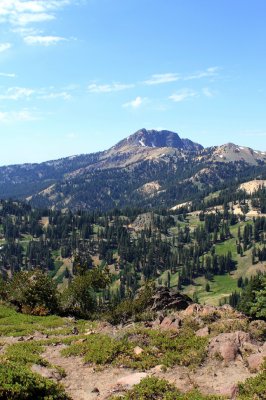 When you reach the Bumpass Hell area, after about one and a half miles, you’re immediately greeted with the strange colors, loud noises coming from the big boiler, and an overwhelming smell of sulfur. 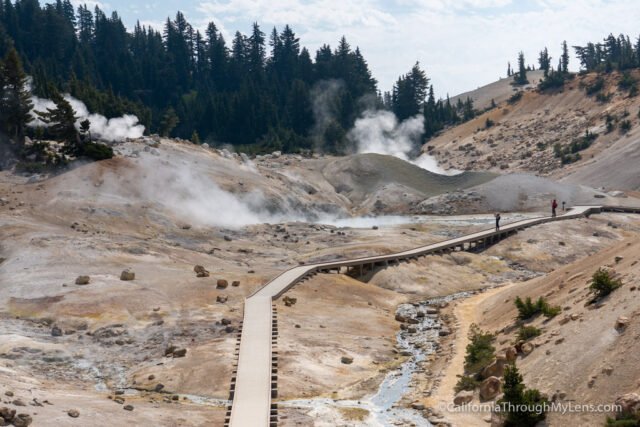 The terrain itself is almost otherworldly. There are a lot of orange, red, and bluish rocks all over, due to the sulfur mixing with the ground. Plus, the creek that comes off Bumpass Helli has solid grey water. 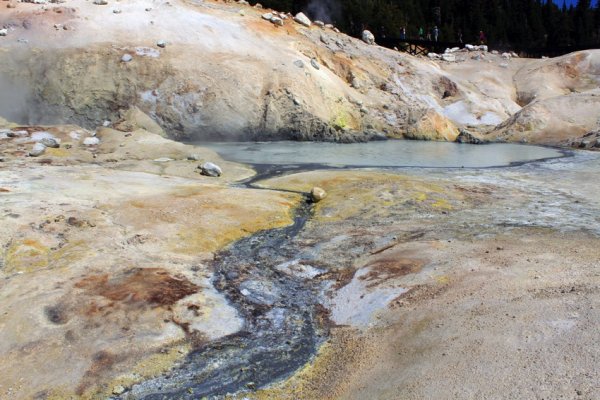 Many different mud pots constantly boil from the heat that is coming up from underground. You won’t have to walk along the brittle ground though, as there is a boardwalk installed so you can see all of the pools, geysers, and steam vents. 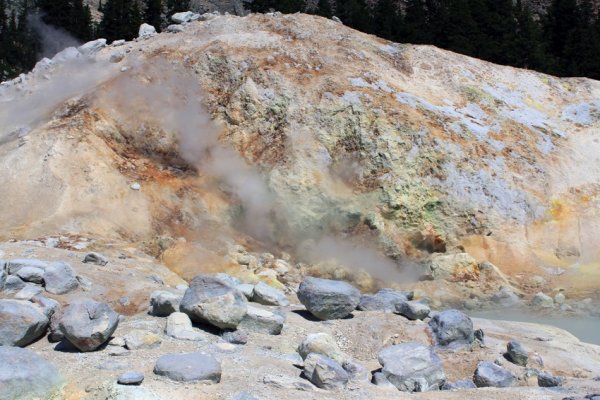 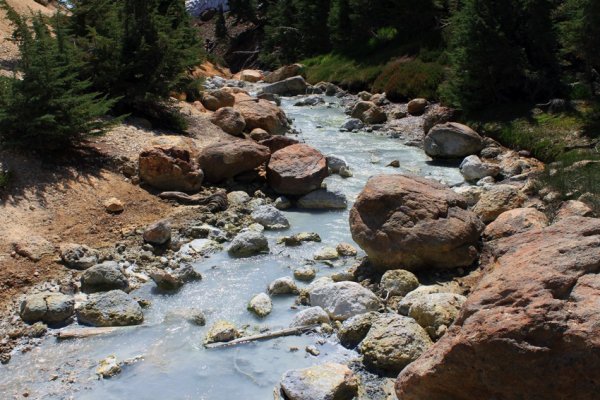 The area comprises over 16 acres, with the main part you see on this trail on a small portion of that. Bumpass hell was named after Kenall Bumpass, an early settler who had a mining claim in the area. When he was exploring, he fell through the thin crust and his leg entered one of the boiling pools. It caused severe burns and his leg eventually had to be amputated, leading to the name Bumpass Hell. 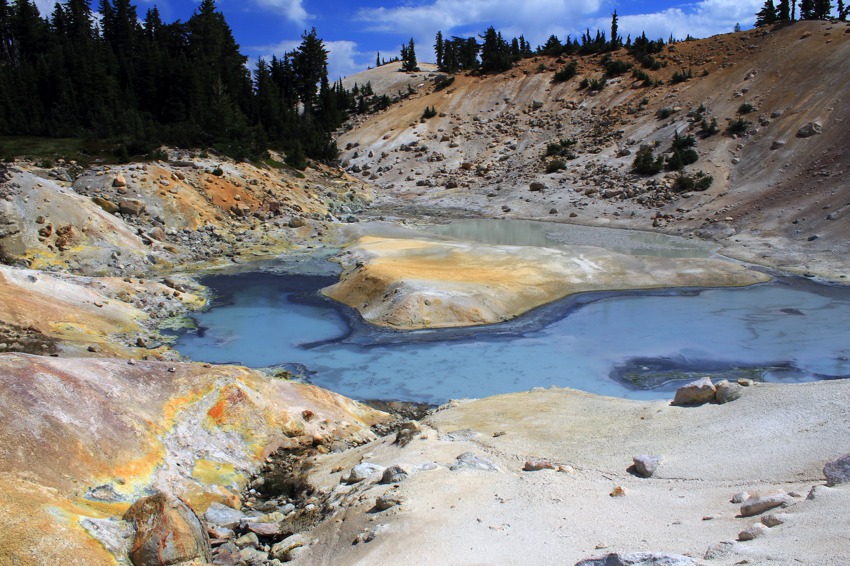 Update 2020: When I came back in 2020, the area was much different, with a smaller boardwalk that only allowed you to access some of Bumpass Hell. It was still amazing to explore even with these changes though. 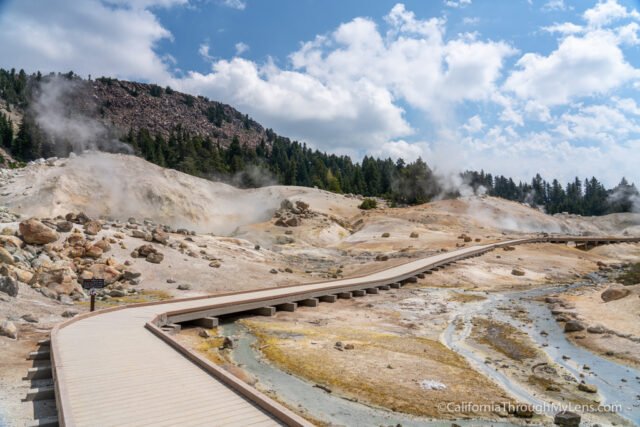 You can see the difference in the boardwalk in the below two photos. 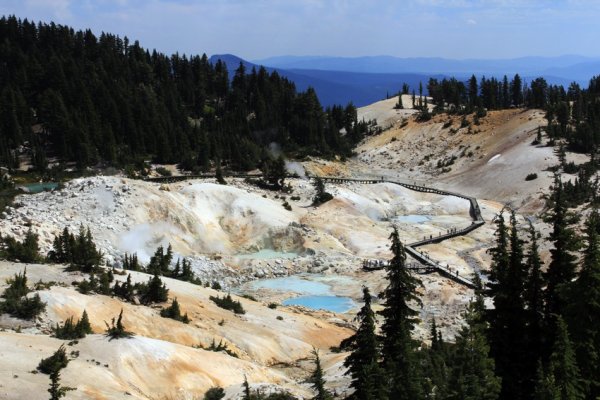 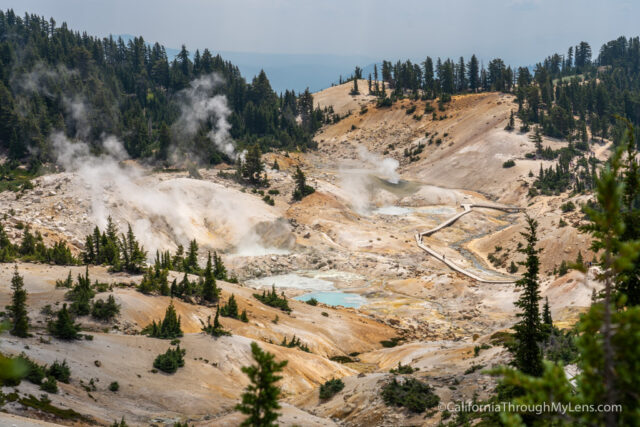 When you finish walking along the boardwalk, be sure to head up the small hill to the overlook on the other side of Bumpass Hell. This gives you a fantastic view looking back the other way towards the main geothermal area. 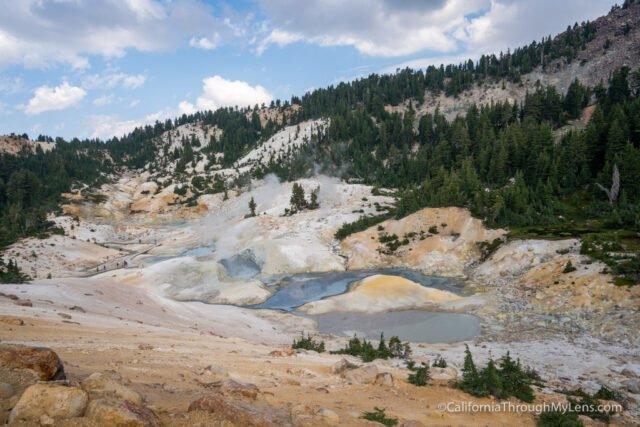 After about 30 minutes walking around the boardwalk and taking in the sights, we headed back to higher ground and towards the trailhead. Bumpass Hell is one of those places that really has to be seen to be believed. When I initially saw the pictures, I wasn’t sure what to expect, and it exceeded my expectations. 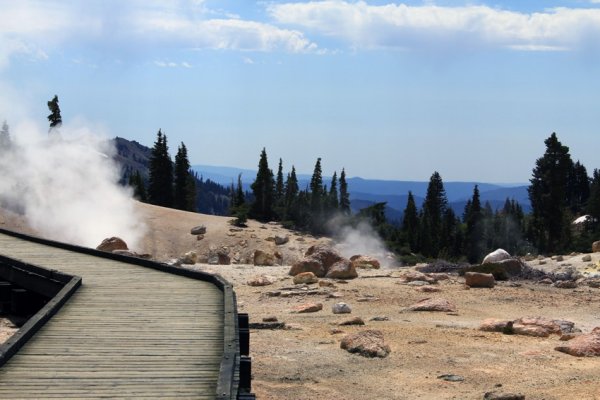 I would recommend checking out this area as it is an easy walk, and it is something that you never really get a chance to see.  Let me know what you think in the comments and read more about Lassen National Park here.