For those that live in the Inland Empire, Mt. Rubidoux is one of those great places to get a workout and experience nature. It is the perfect hike for just about anyone as it is a short and mostly easy (paved) walk to the summit of the mountain, and it has a great view to reward you at the top. On the way, there are many different Riverside historical landmarks such as the Peace Bridge, American Flag, and then eventually the cross on the top. I have walked Mt Rubidoux many times and love the chance to get up to the summit and take in the city. Here is all the information if you want to check it out. 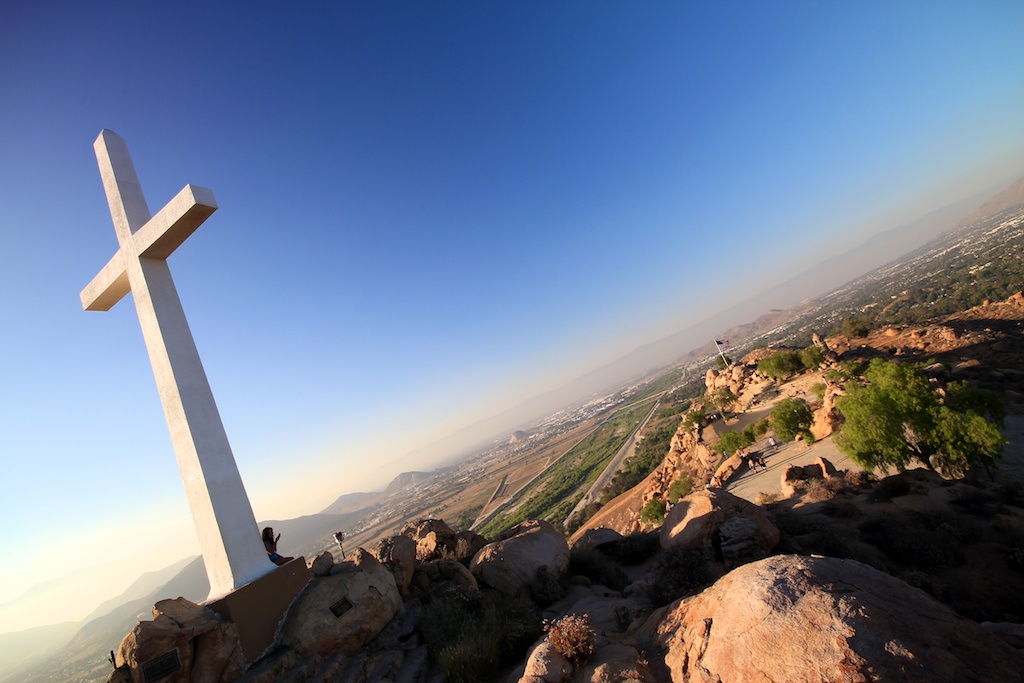 A little history on the mountain is as follows:

“In 1906 Frank Miller, owner of the Mission Inn, along with Henry E. Huntington and Charles M. Loring, formed the Huntington Park Association and purchased the property with the intent to build a road to the summit and develop the mountain as a park to benefit the city of Riverside. Originally the park was named Huntington Park, but the name was changed to the Frank A. Miller Mount Rubidoux Memorial Park after the heirs of Frank Miller donated the property to the city in 1955. On December 13, 1925 the Testimonial Peace Tower, devoted to peace, was dedicated to Miller. The bridge is a replica of a noted bridge in Alcántara, Spain. Initial improvements, including the road, were completed in February 1907. The first memorial marker on the mountain, the cross and tablet at the summit honoring Father Junipero Serra, was dedicated on April 26, 1907.”

The above picture is one of my favorites as it shows how much history this mountain has. The Easter Sunrise service is the longest-running outdoor one in the United States, and I have been a few times, it is always a wonderful way to celebrate Easter. 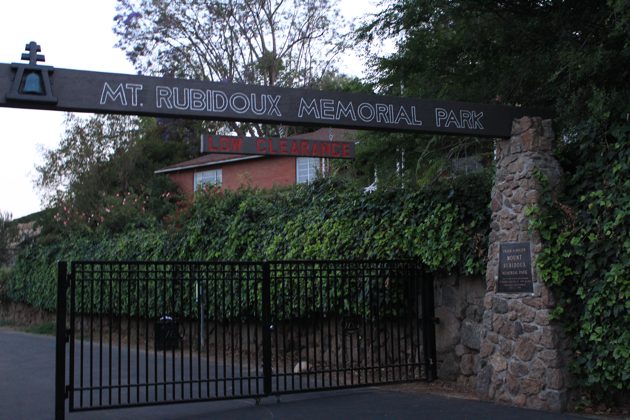 The best thing about Mt Rubidoux is that there are many different trails up the mountain. No matter which way you approach it, there is sure to be a path. That being said, you need to pay careful attention to parking when you are at the mountain. Recent laws in the city have set up specific parking areas and sides of the street that are resident parking only, so make sure to read the signs when looking for somewhere to park.

Since they have now completed the Ryan Bonaminio Park I believe that is the best place to park for the mountain. The address for this park is 5000 Tequesquite Ave, Riverside, CA 92506, and it has a lot of parking spaces. It has easy access to the mountain, as you just head up the street about a quarter-mile from the parking lot, and you will reach the start of the trail.

The trail is easy to find as it is a paved road all the way up. There are a couple of them, so you have to choose which length you are in the mood for when you go. There is a long way that is around two and a half miles, a shorter way that is around one mile and a backside way that is less than a mile but pretty much straight up the whole time. If it is your first time, I would suggest taking the long way as you will get to take in all the sites and see the famous Peace Bridge that was mentioned above. It is a beautiful hike that takes you around many different plants and flowers, huge boulders that you can climb, and even the historical markers on the mountain. Plan for about an hour to an hour and a half to complete the less than 3 miles as you will want to spend some time on the summit. 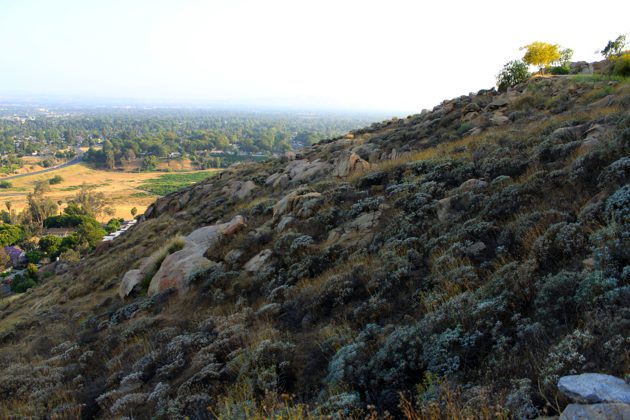 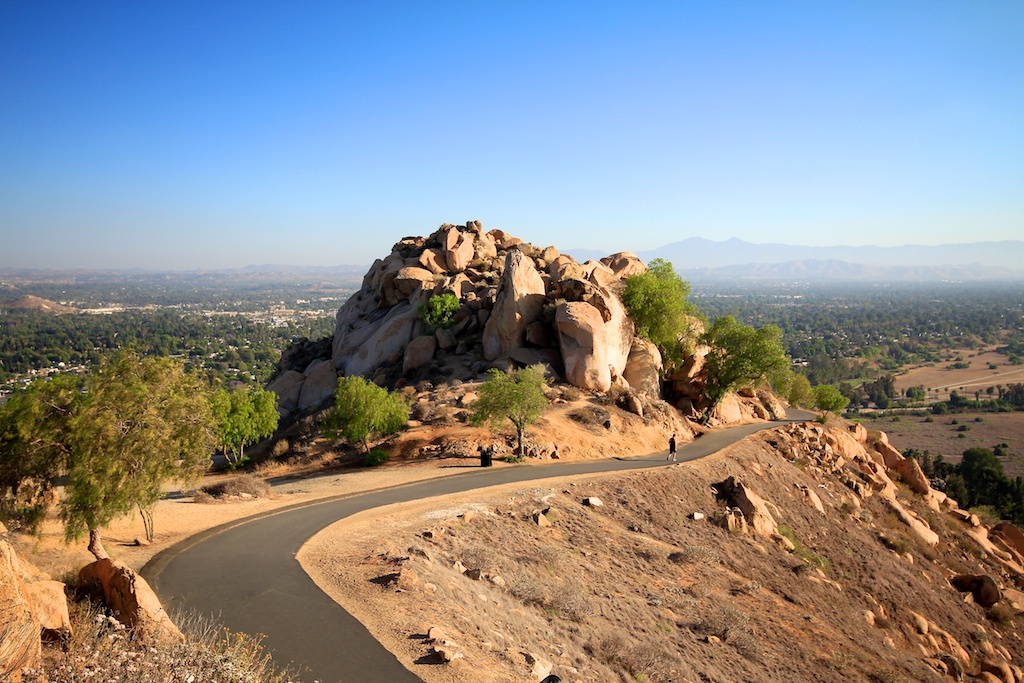 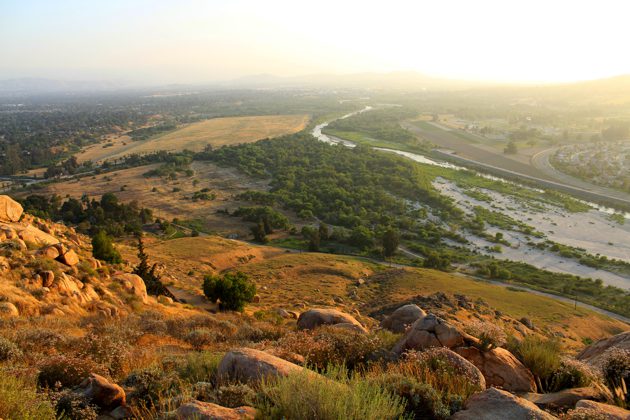 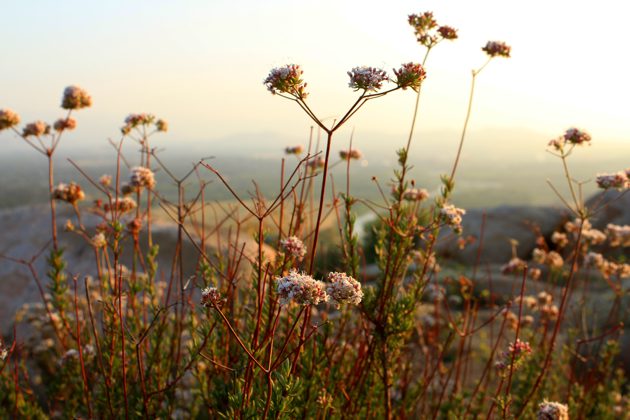 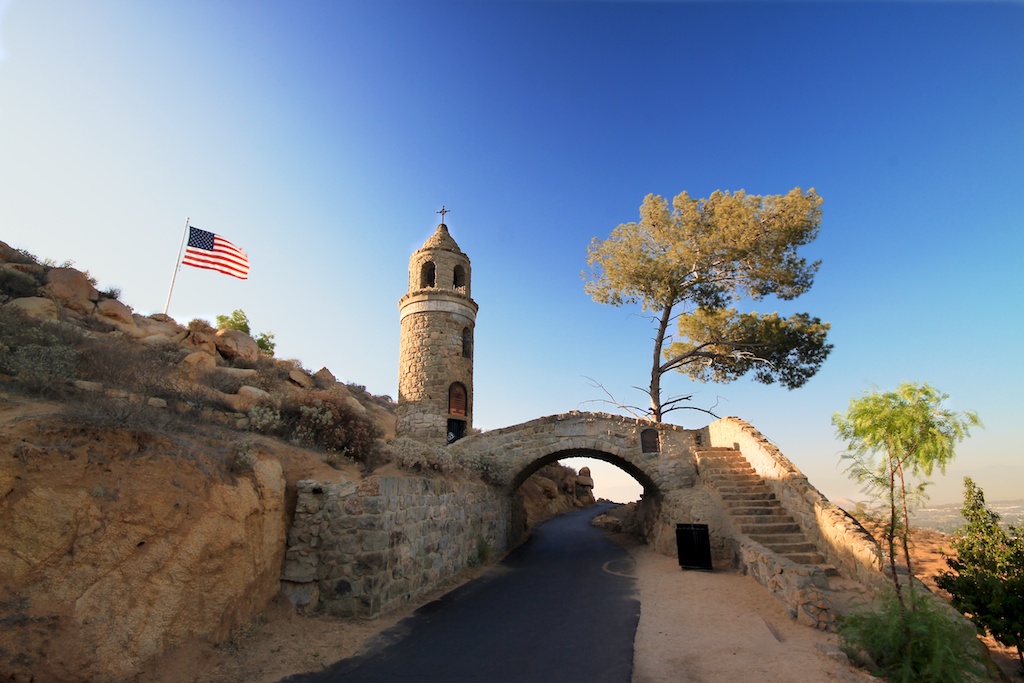 The Peace Bridge was built in 1925 by the city of Riverside to commemorate the work that was done by Frank Miller and his family while they were away on travel. It was dedicated when they returned, and a plaque was created that said:

“Peace with Justice for all men. Anno Domini 1925. This bridge
was built by neighbors and friends of Frank Augustus Miller in
recognition of his constant labor in the promotion of civic beauty,
community righteousness, and world peace.”

It is a beautiful bridge that adds to the uniqueness of this trail. Great for photoshoots or to admire while making your way to the top.

On the summit of Mt Rubidoux, you will find many different things to explore. I have never been up there when there was not at least 10 to 15 other people hanging out on top. The cross, which is the highlight of the mountain, is so big it can be seen from the freeway, and it alone is worth the hike. 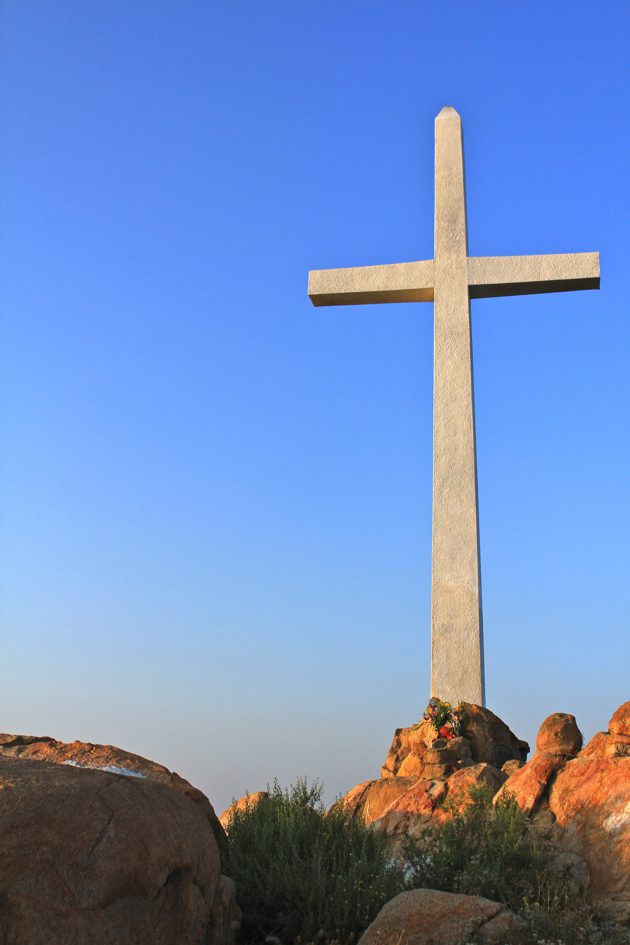 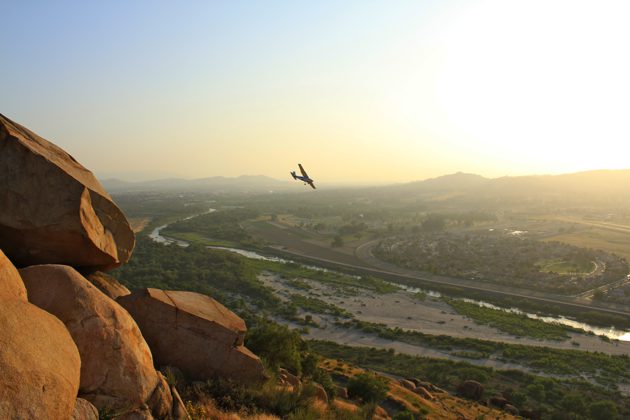 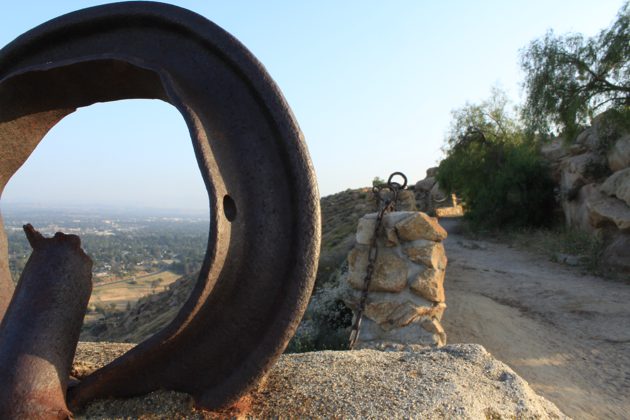 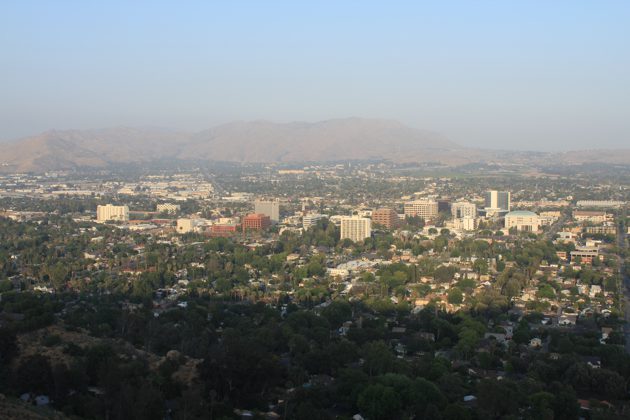 This is an especially beautiful area to watch the sunset as you can get a great view if it is clear. To head down from the mountain, simply go back the way that you came. 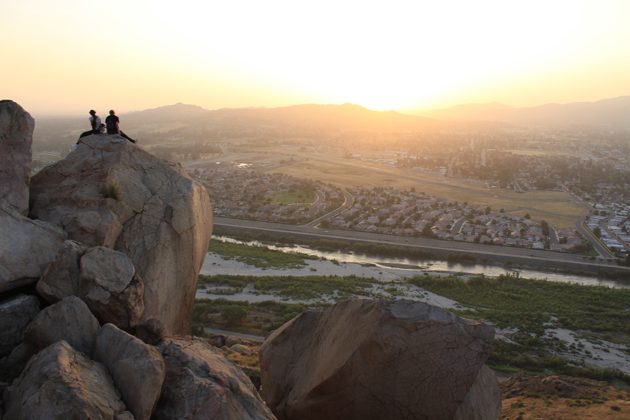 The Easter Sunrise Service is the longest-running in the United States at over a century. Every year people make the walk to the top in the dark to watch the sunrise over the city and hear a message. I have done it multiple times and always enjoy it. Here is a video I made from 2016.

If you are doing this, plan to leave at least 30 minutes before sunrise (usually 6 AM) so that you have a chance to make it up the mountain and grab a spot. People get their much earlier though, to get the best places. It lasts about an hour, and you can read more about it here. 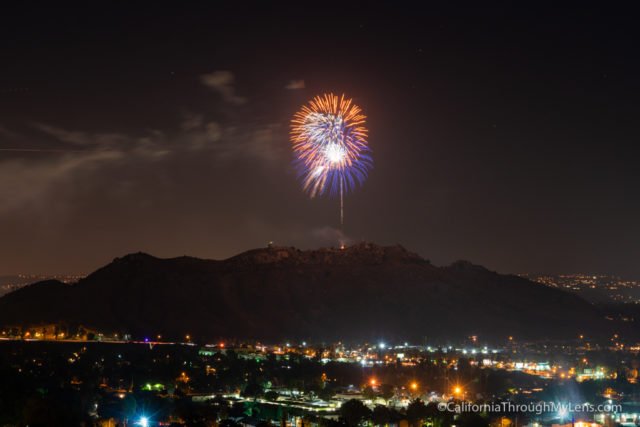 Lastly, Mt Rubidoux is where the annual Riverside Fourth of July fireworks show takes place. The whole mountain is closed that day and people gather in the park below to watch the firework being shot off the mountain. It is a lot of fun if you are in the area during that time of year.

This mountain is an excellent experience for both the first time hiker and anyone looking to show a friend a great local spot in the Inland Empire. I have done it many times, and I can honestly say each time I see something I haven’t before. Make sure you take the time to head up Mt Rubidoux if you are near the area, as it will be something you will likely love and want to do again.

If you have been up there or have additional information on the mountain, make sure to leave it in the comments and get directions below.