I have visited the park many more times since this initial 2011 visit. Read all about my trips and more recent posts here. 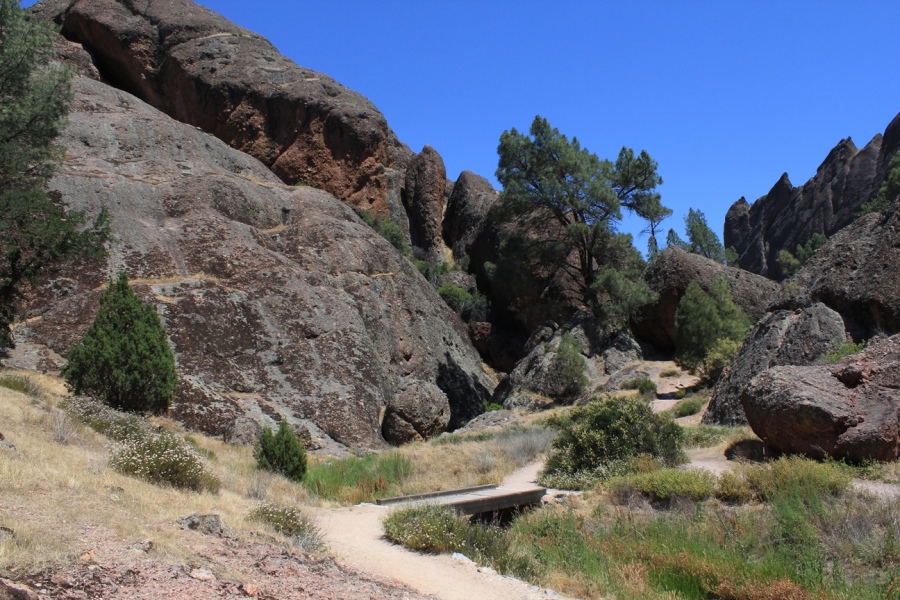 Pinnacles National Park is described as:

A protected mountainous area located east of Central California’s Salinas Valley, just miles from the town of Soledad. Pinnacle’s namesakes are the eroded leftovers of half of an extinct volcano. Pinnacle’s is divided by the rock formations into East and West Divisions, connected by foot trails; there is no through road that connects the east and west entrances to the park. The east side has shade and water; the west has high walls. The rock formations provide for spectacular pinnacles that attract rock climbers. Pinnacles National Park is most often visited in spring or fall because of the intense heat during the summer months.

Obviously, I missed that last sentence when I went because we got there in early July, and it was 111 degrees outside. This made the hike that we did a lot more difficult; however, it was still fun, and at least we got to go through some caves to get out of the sun. 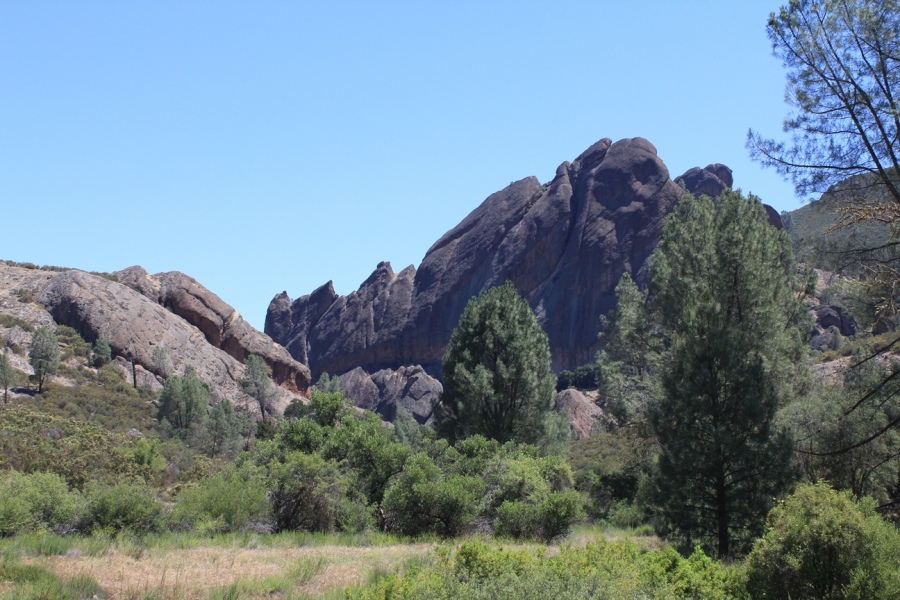 The park itself is composed of many massive rock formations from a volcano that has long since broken in half via a massive earthquake. The earthquake left these enormous rocks that look like a daunting alien landscape. The park sticks out from the rest of the area that has little unusual about it, and it is crazy to see the landscape change as you drive up. We went to the West Entrance when we went to the park, which has a lot less to experience than the East. Make sure you do your research to see what entrance you want to go to as there is no easy way to drive between them. 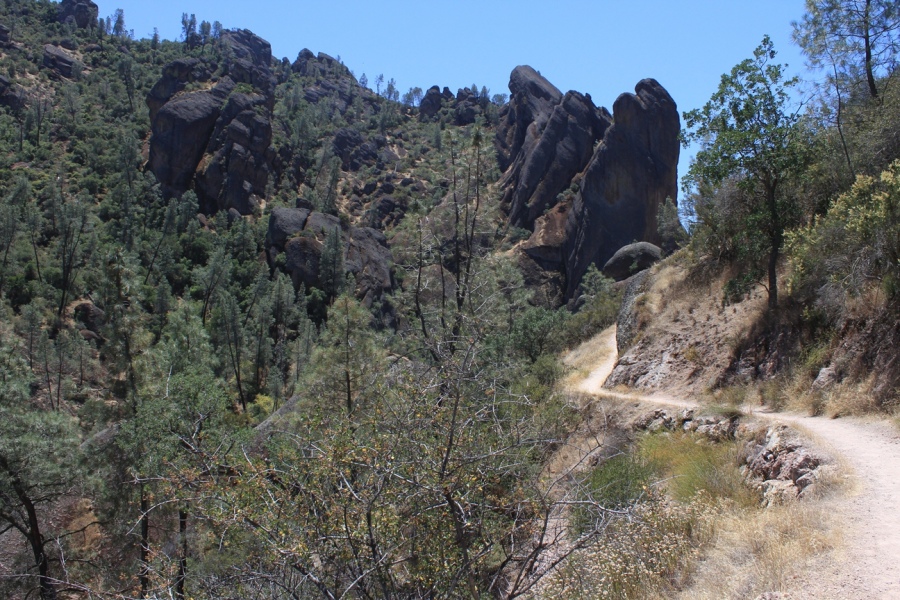 After about 5 miles driving on a winding road from the town of Soledad, you arrive at the rangers station and can pay the fee to enter the park. If you are going to the park for the caves and views of the rocks without having to hike much, then the West entrance is the best. The East entrance requires you to put more miles in hiking to see both the caves and the high peaks. 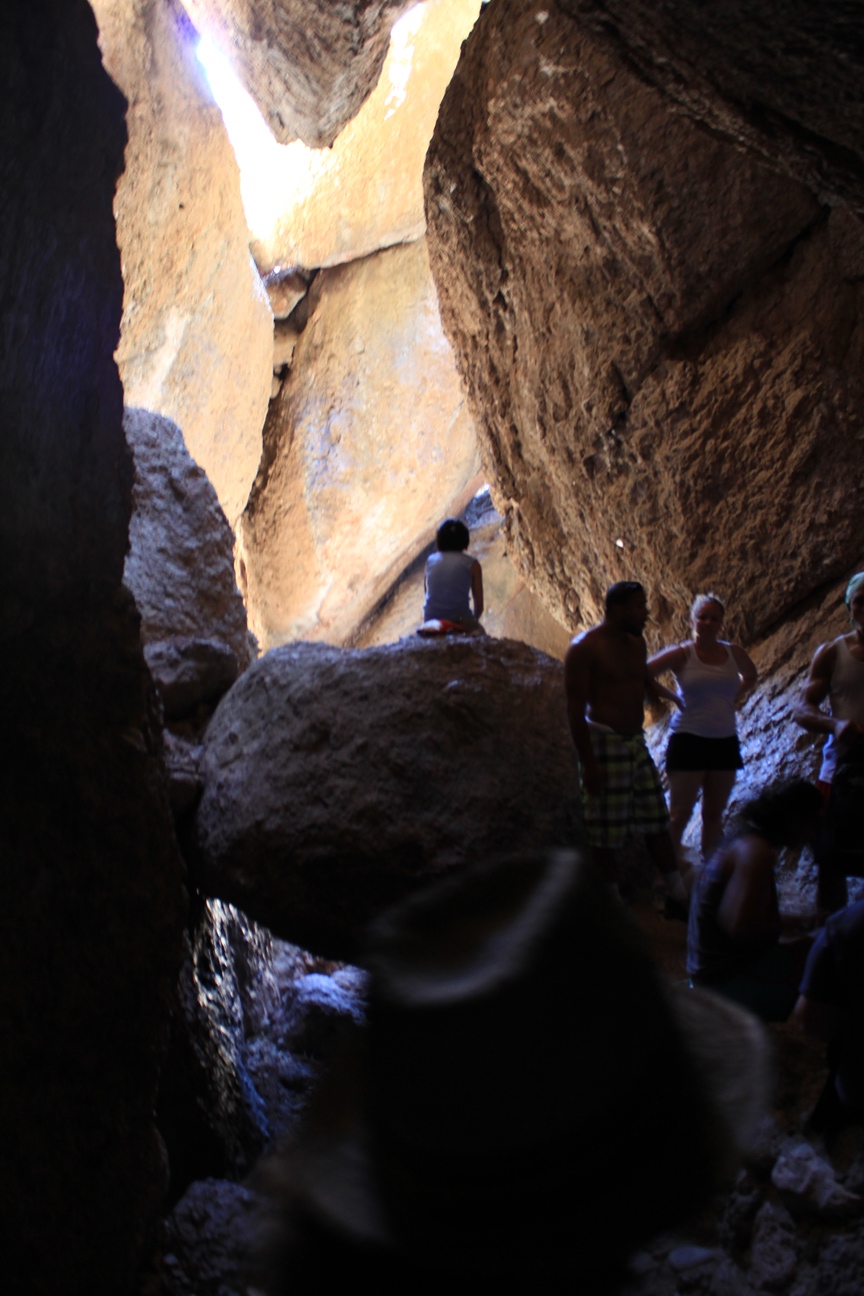 The caves themselves are not the traditional human-made or lava formed caves that people have become accustomed to. They are created entirely of the volcanic rock falling in on itself, so they are all uneven and have large stones making up the cave roof. If you go from May to July, you are only able to climb in one of the two caves, as the other is off-limits due to endangered bats giving birth. However, even if you go during this time, it is worth making the trip to Balconies Cave. 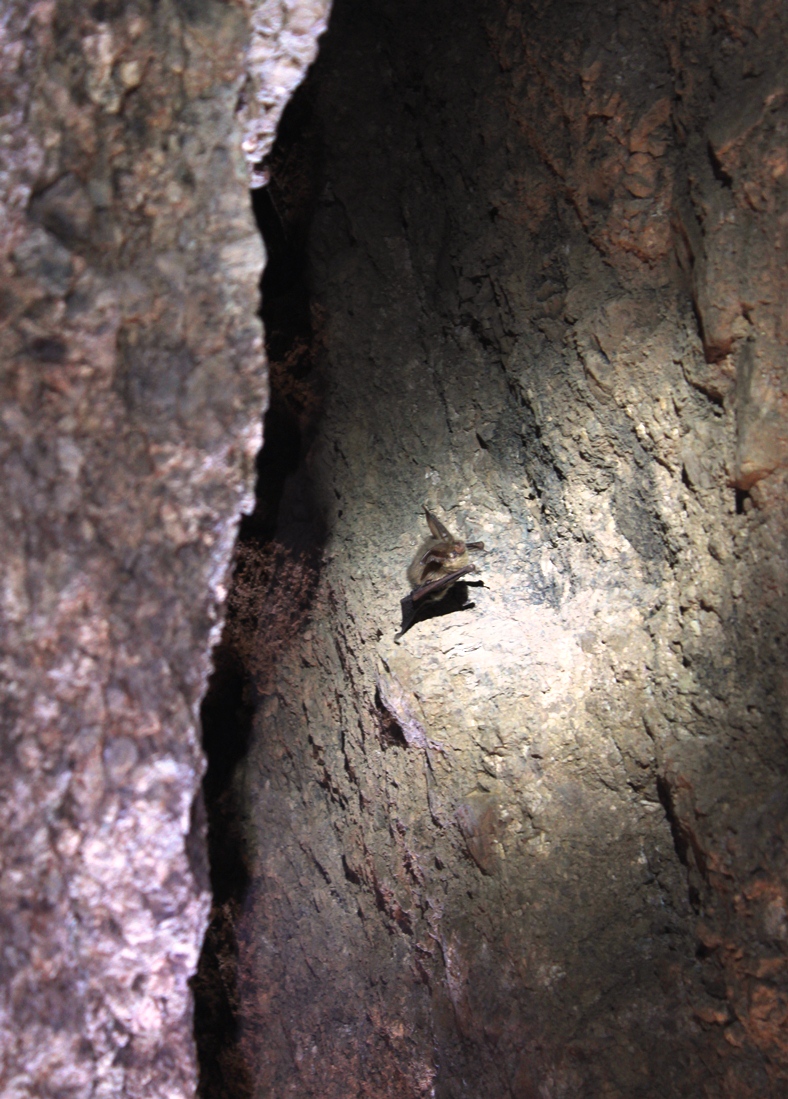 Balconies Cave comprises about 10 to 15 minutes of walking in and out of the cave; the second part is a deep drop that you climb into, and it does require a flashlight as it is incredibly dark. This cave is not what you would expect, but because of that, it provides a truly unique experience. You are not in it too long, but the drop is deep, and rocks are huge. I even saw some bats in the cave, as you can see in the above picture. 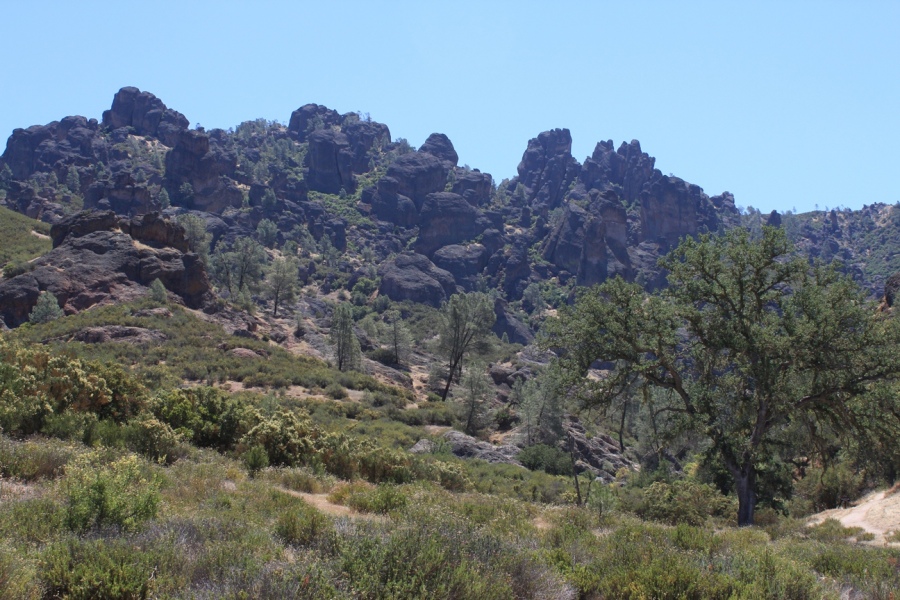 If you stay on the Balconies Loop Trail after the cave, it will take you up the side of the mountain and give you a great view of the High Peaks. The high peaks are shards of the rock that extend straight out of the landscape across the way. There is a trail around them at Pinnacles National Park, which I came back and did (read about it here). I would not recommend this park in the summer, though, as you are liable to pass out from the heat and lack of shade. I know it may be hard to tell in the pictures, but these rocks are massive. 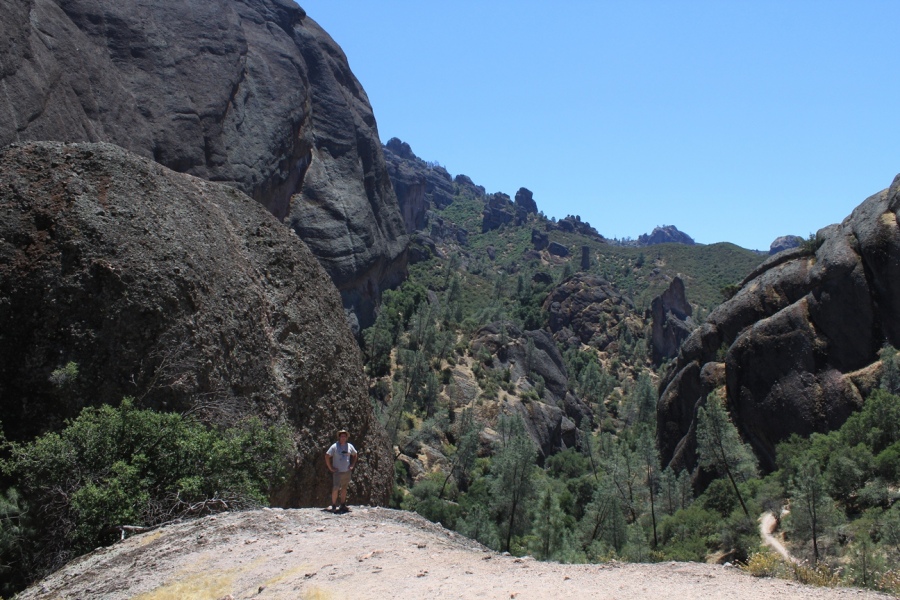 From the last numbers that I heard before it became a National Park, only 150,000 people enter the park every year (as of 2011). While I wish more people would get out and enjoy these parks, this does allow you to experience nature without always waiting in line and bumping into others, which is great. I am sure this will change with the new National Park designation, though. 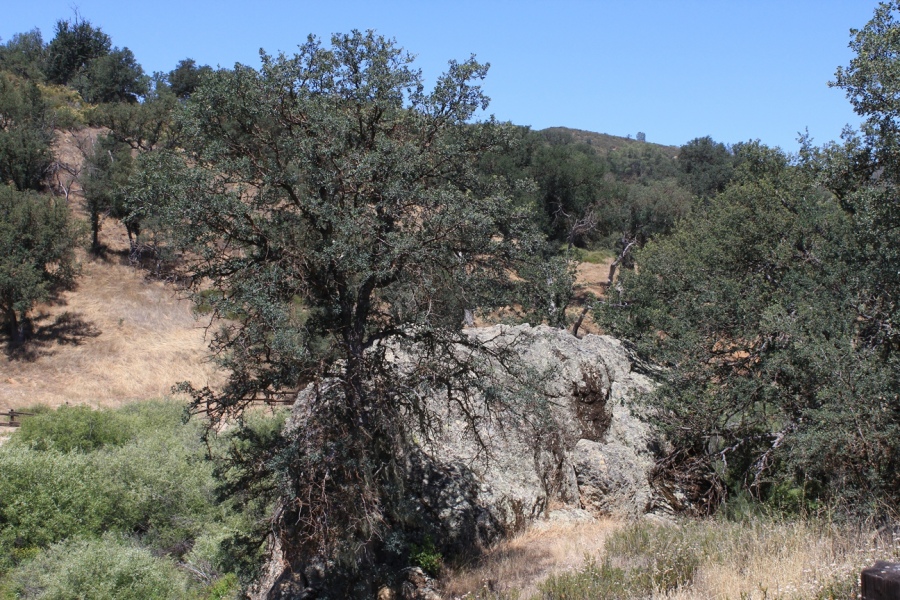 All in all, I would recommend you stop by this park if you are ever in the area. The beauty needs to be experienced at least once, and if you are going into the caves, make sure you bring a flashlight!