Mission San Antonio de Padua was the third of the Spanish missions founded in California. Father Serra founded it in 1771, and it is the least visited of the California Missions because it is the hardest to get to at about 26 miles off Highway 101. If you are a fan of California’s history, then this is a great mission to visit and well worth the effort. Since it is so far away from a major city, it is one of the most historically intact missions, complete with an old tannery and watermill. Here is all the information so you can check it out yourself and read about my time at the other missions here. 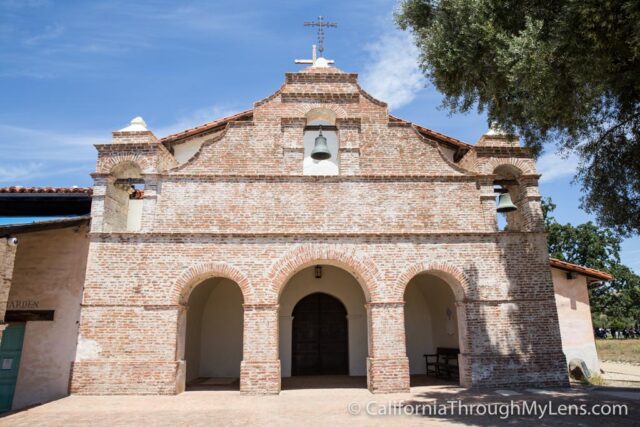 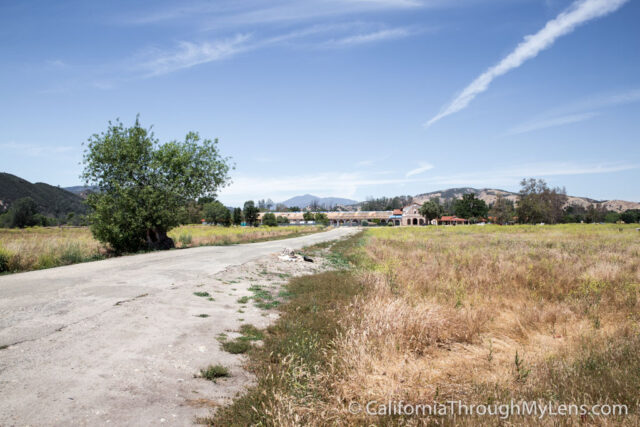 After getting off the 101 at Jolon Road, you will be driving for about 26 miles (I would recommend putting it into your GPS). At about 20 miles, you will reach the army base. When I got there, I told them I was headed to the mission, and they waved me through. You will pass a ton of hummers and army related gear on the way before eventually reach a sign for the mission and a short dirt road to reach it. There is a lot of parking in the dirt lots. 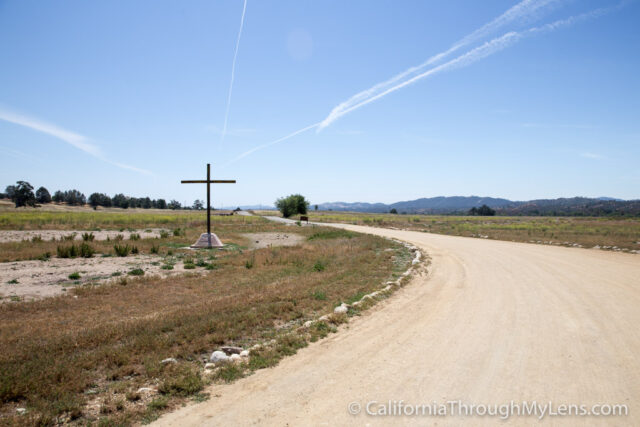 When I went, the exterior was under heavy construction so it was not as nice as it would have been. 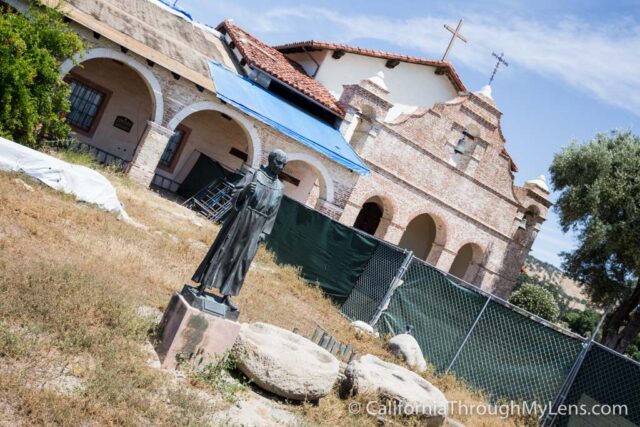 The facade of the chapel was amazing though, and it is one of the only mission chapels that has a facade that sticks out from the mission itself. 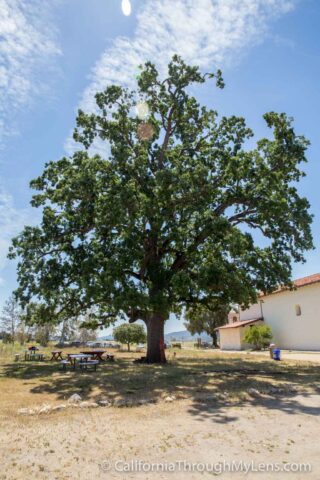 The exterior also has a lot of old trees that have grown gigantic over the years. A few of them are from the 1800s. 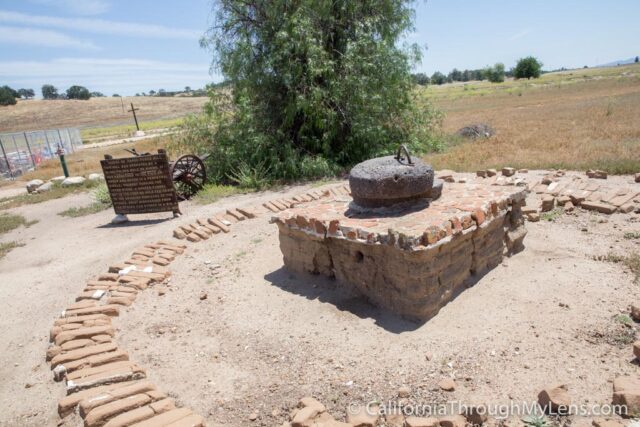 This mission is different than most of the others as there are a few exterior things to see before going into the mission itself. 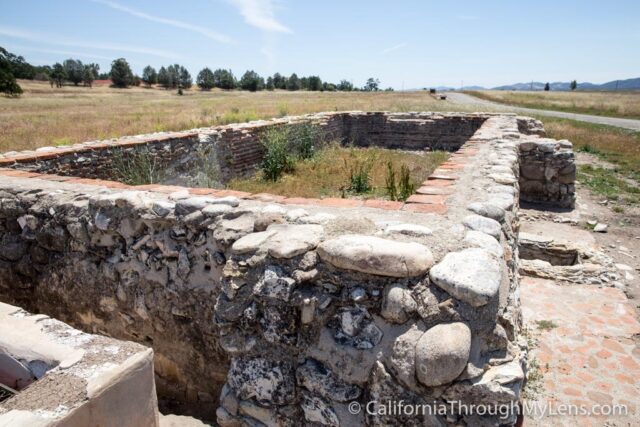 The first is an aqueduct near the entrance and a well. The well actually had water in it when I visited, which was crazy. 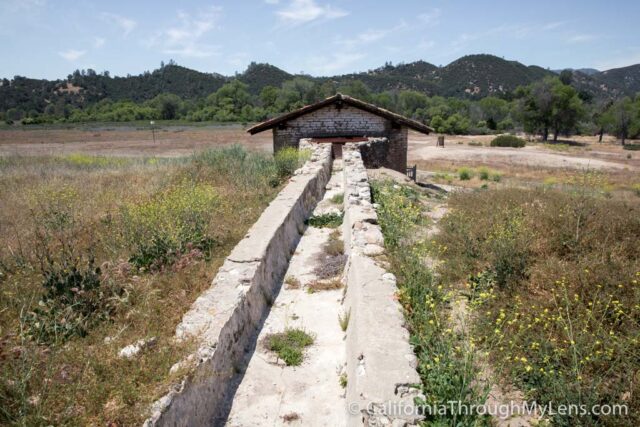 Next, off to the left there is a trail you can take to a few other spots. 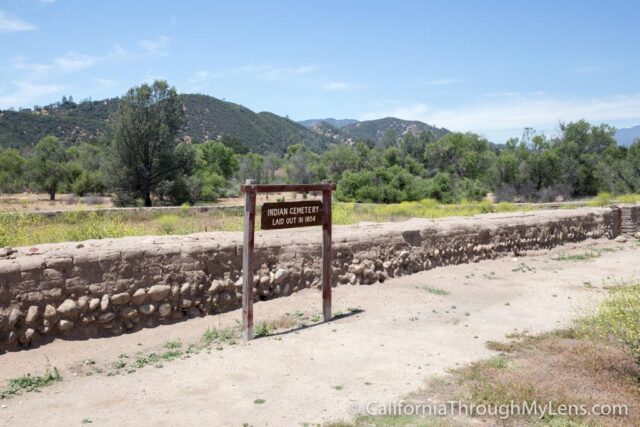 The first you will reach is the Indian cemetery, which has a large stone wall all around it. The cemetery doesn’t have any headstones, so you can’t see anything specific, but it is a large cemetery. 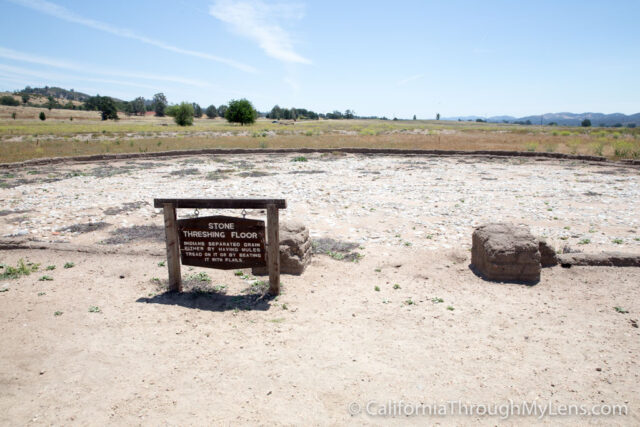 Next is a large stone threshing floor that the Indians in the area used. It reminded me of Indian Grinding Rock State Historic Park, but it wasn’t one large rock like that is. 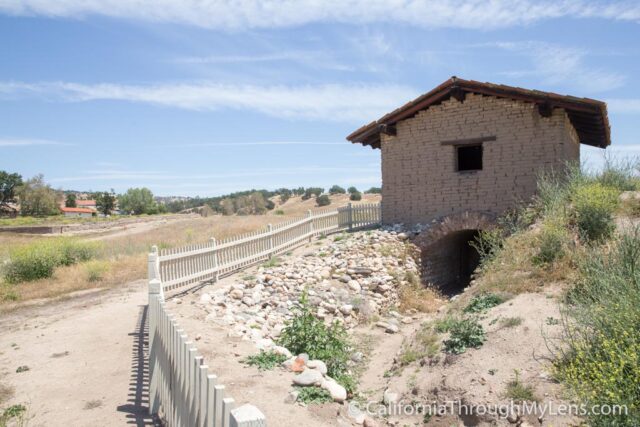 Lastly, there was a tanning area and a small house that was the old watermill. 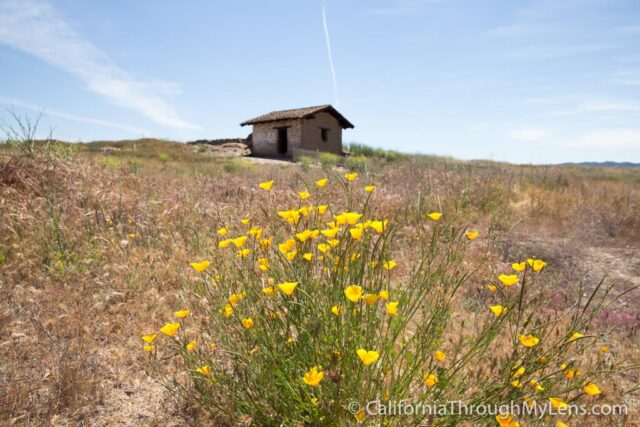 This was one of my favorite spots at the mission as the house had a wheel below for regulating the water, and it was beautifully maintained. 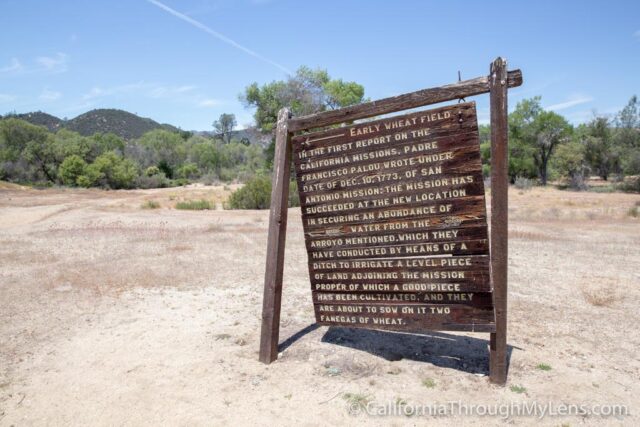 There is a sign that shows where they used to grow wheat, but of course, there is no longer any wheat there. After this, I would recommend walking back to the mission and going inside. 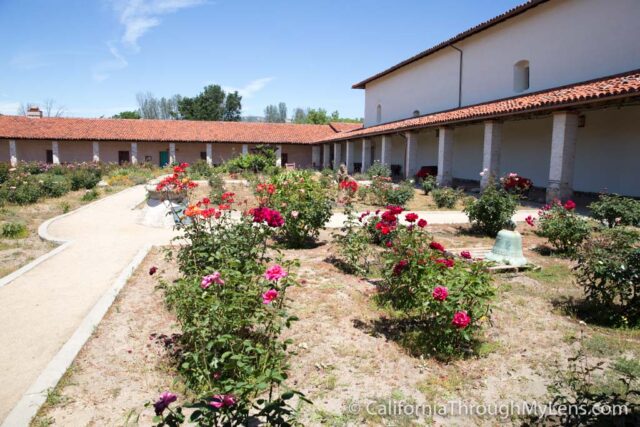 The gift shop you enter first included all of the usual mission souvenirs you have become accustomed to seeing. I paid my fee and then walked into the courtyard. 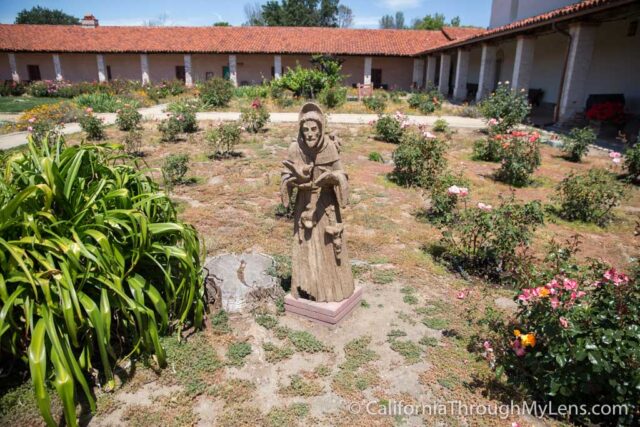 The courtyard of this mission was large, and you could walk all around it. All sides of the missions quadrilateral shape were still accounted for, which made it an excellent spot for photography. 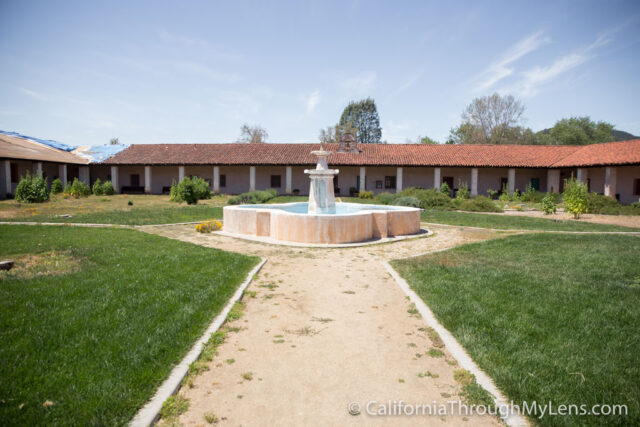 You can tell that this mission has fewer visitors and is less funded as the gardens are not as well kept up as other missions, but they are still beautiful. 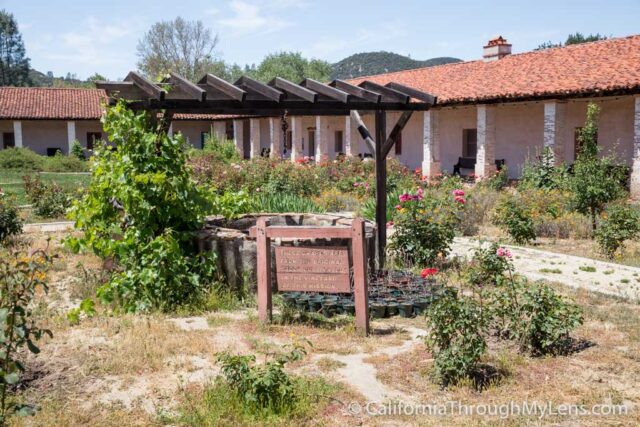 There were large sections of flowers around the courtyard and the original vines from when the mission was in use. 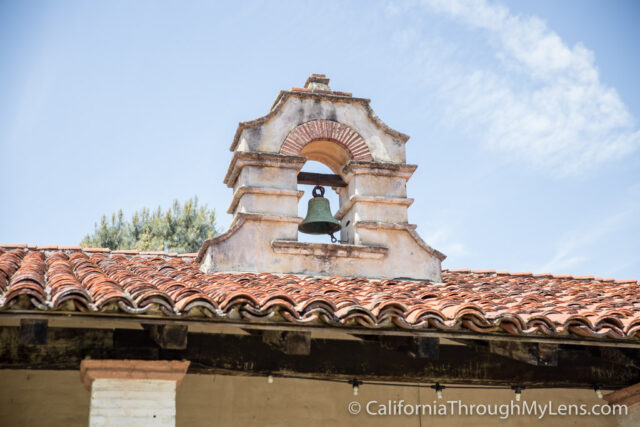 Lastly, there is a large fountain in the middle, which I have become accustomed to seeing while at the missions. 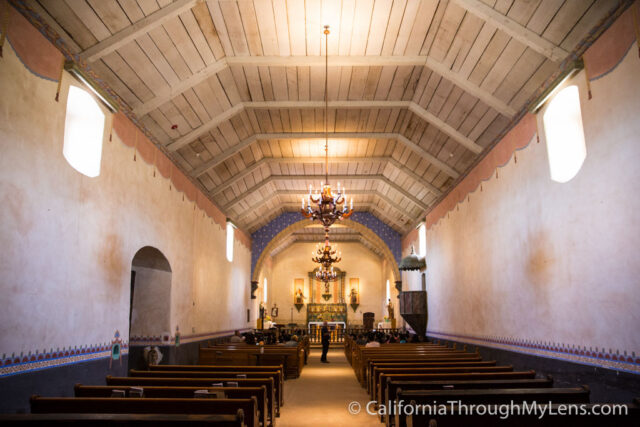 When I was there, there was a school program going on in the chapel, so I didn’t get to spend as much time as I usually do. This chapel was pretty and well kept up though. 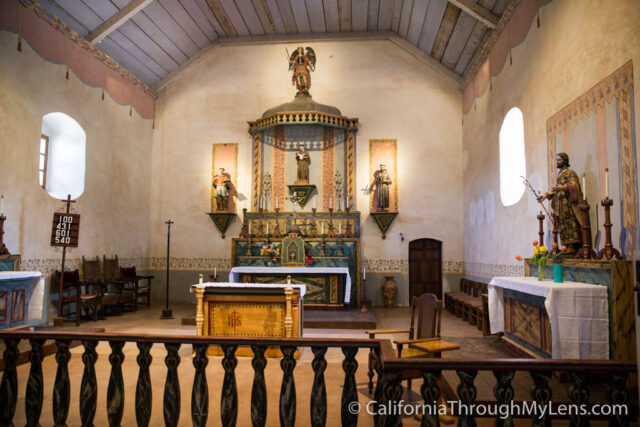 The chapel was large and could house a decent amount of people for Mass. The altarpiece was very plain and not the ornate design I had become accustomed to seeing. 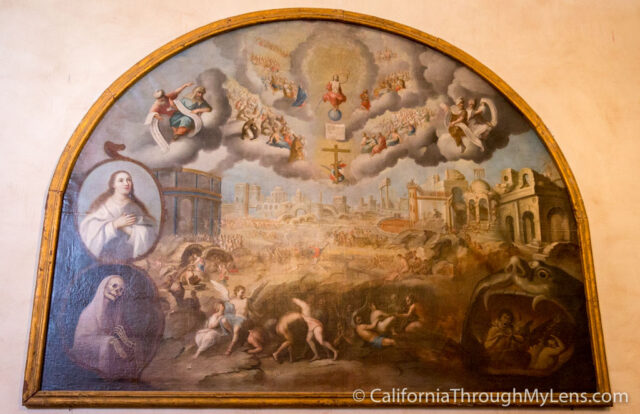 There was an amazing old painting that I saw on the wall of the chapel as well. 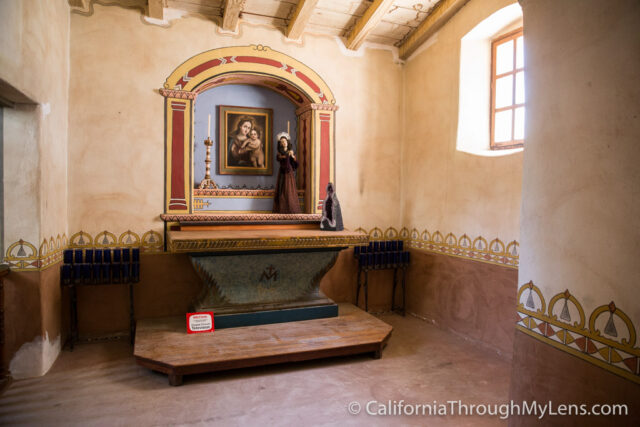 After taking pictures in the chapel, I headed out and back to my car. Even though this mission is really out of the way, it is a beautiful one with a lot of history and is well worth seeing. If you want to read more about my time on El Camino Real, check out this post and be sure to leave a comment if you have been.