Mission San Juan Bautista was the 15th of the missions founded and was opened in 1797. It is a beautiful example of a California mission as it has many rooms and two chapels for you to explore. The mission is a very popular one for school children as it features a lot of great exhibits to showcase what life was like during the mission’s time. It is also part of the California State Parks system, much like the mission in Lompoc. I visited it on Day 4 of my road trip to see all of the missions, which you can read about here. 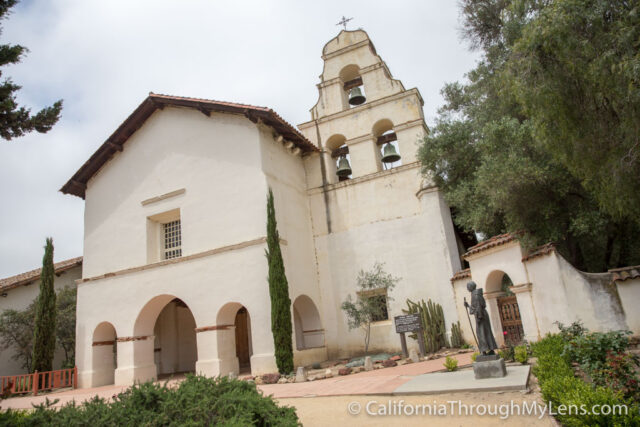 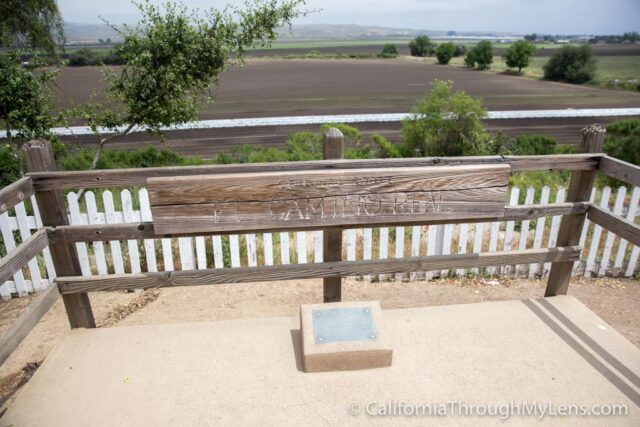 The mission is located in the central downtown square of the town of San Juan Bautista. The city came to be because of the mission’s influence on the area. There is a lot of free street parking near the mission. 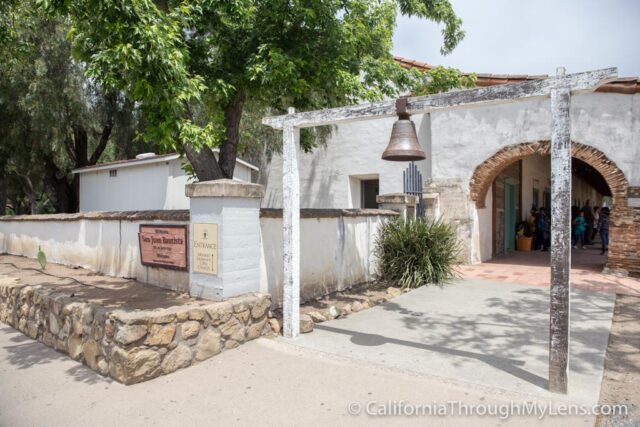 The mission features one large section of a quadrilateral that connects to the chapel. This is where the gift shop and museum are housed, and it is where you will pay your fee to enter the mission. 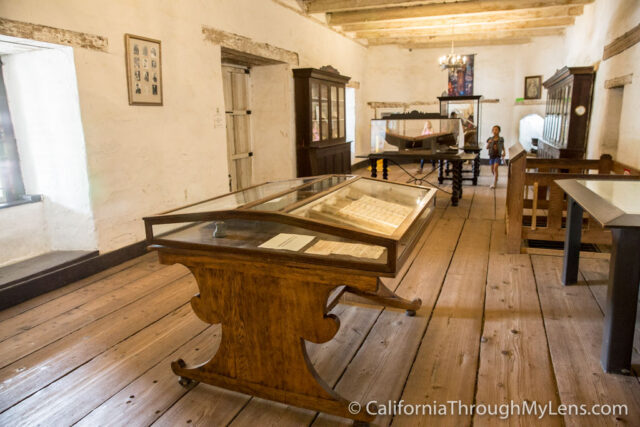 The gift shop drops you out on a walkway that lets you see the courtyard but encourages you to go into the museum first. 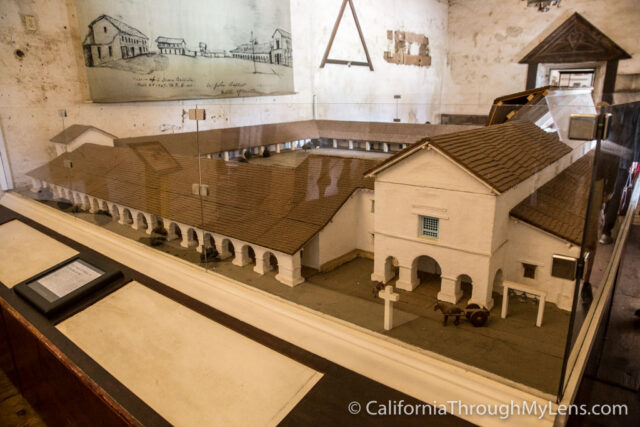 The museum is one of the better ones I saw at the California missions. It has a half dozen rooms full of artifacts, replicas of the rooms from the period, and even a full-scale replica of the mission itself. 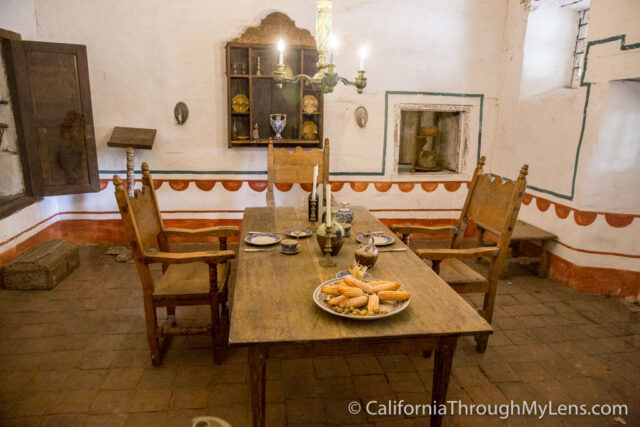 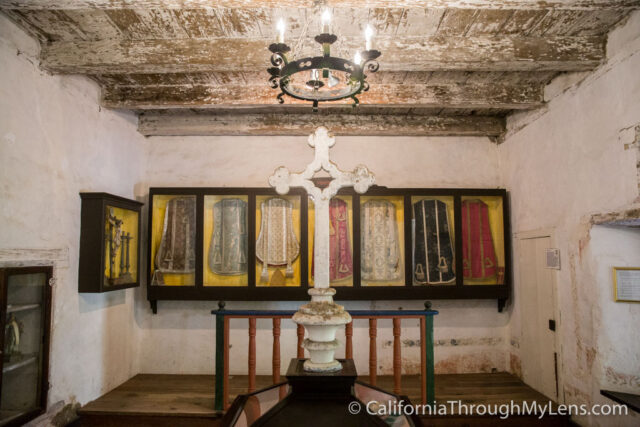 I rushed through it as there were a hundred or so school children here exploring, but be sure to take your time if you go. 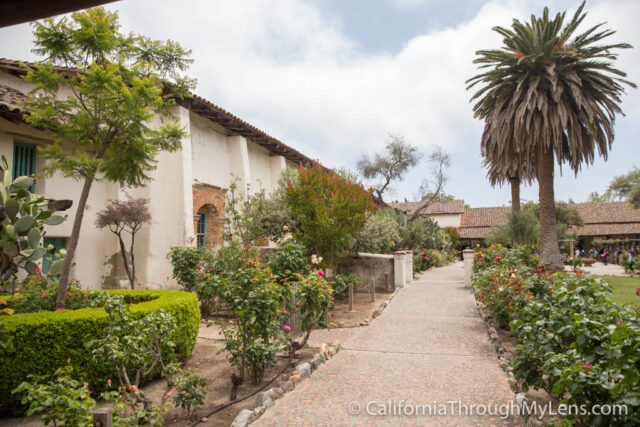 After exiting the museum, you will come out into the relatively large courtyard. 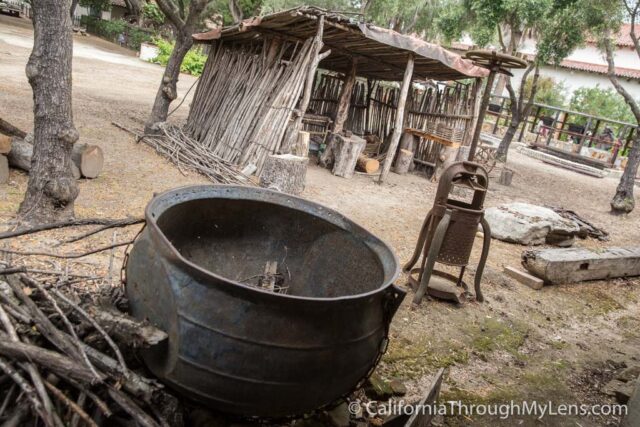 The courtyard features a replica of what the Indian housing looked like, previous to the mission influence. 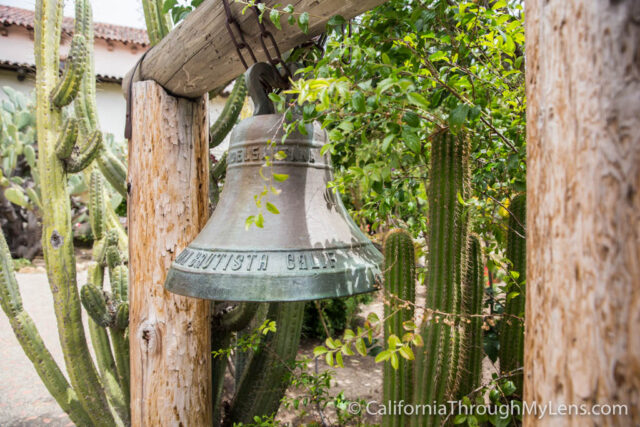 It also had a section with two old bells, something that was common at most of the missions. 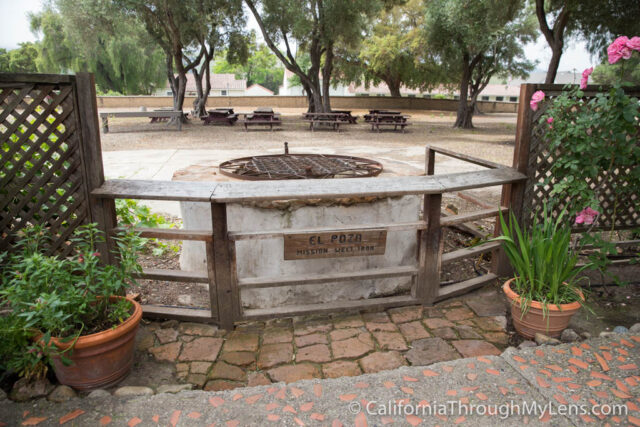 The courtyard has a walkway with vines growing over it and a large pen that looks like it would have held animals. 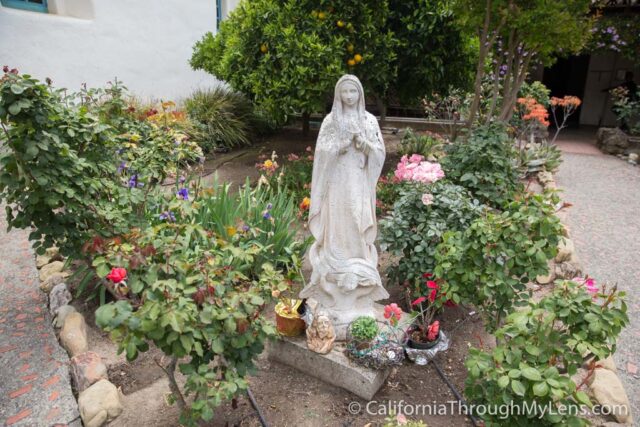 The path here will lead you into the chapel, which was one of the bigger ones I saw during my time at the missions. 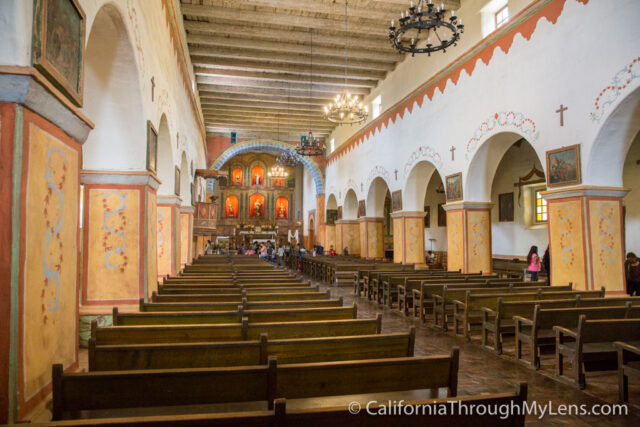 This building was not like the traditional mission chapels; it has been elongated so that it had a seating area and walkways on both sides. 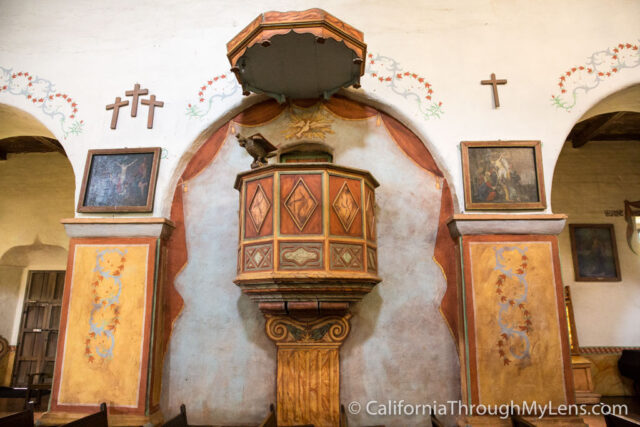 The arches that surrounded the chapel had pastel colors and beautiful Spanish style architecture. 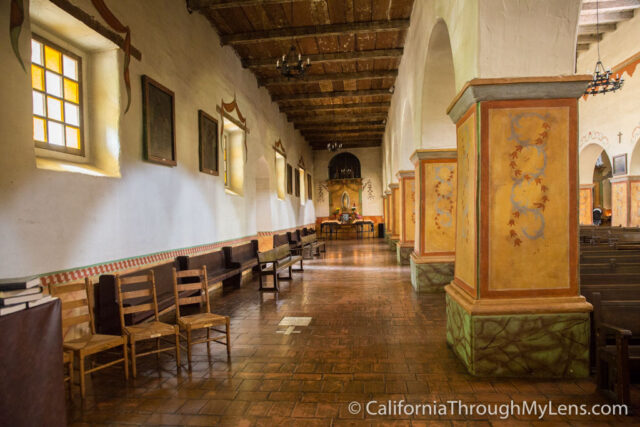 The ceiling is old wood and it is very distinct with the colorful arches around the church and over the altar. 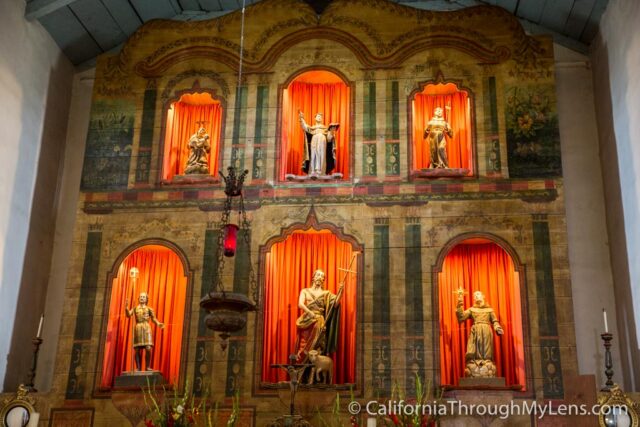 The altarpiece itself looks European with cutouts for each of the saints to sit in and curtains behind them. It is much different from the other ornate altarpieces I had seen, especially with the red drapes. 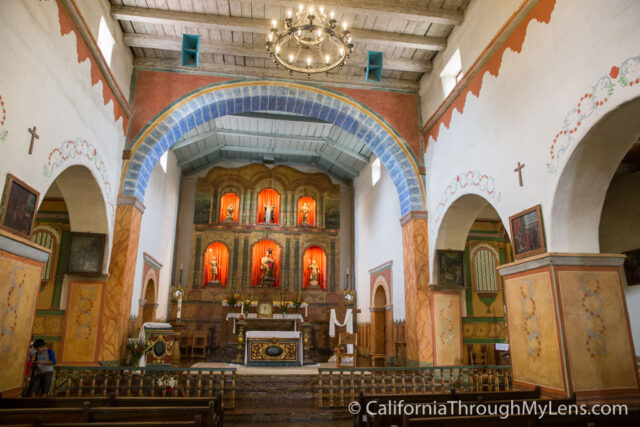 After spending some time in the chapel, you can exit and enter the second smaller mission chapel.

The Chapel of Guadalupe 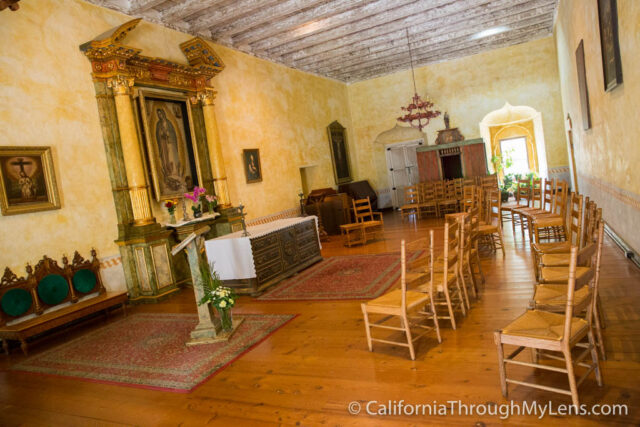 The Chapel of Guadalupe is the oldest surviving building at the mission. This chapel served as the primary church during the larger chapel’s construction. After the main church was completed, it became a Parish Hall and eventually, a storage room. The chapel was recently restored to look like old images they found of it. 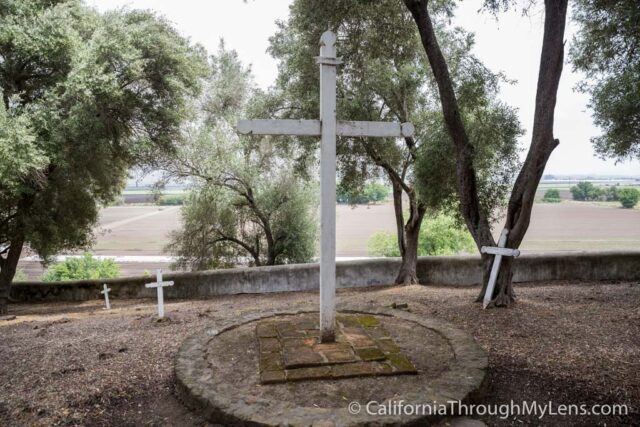 There is a cemetery that has a large wooden cross that is connected to the main chapel. It looks out over the area and is a beautiful view. Even though you can not freely walk through the area, it is still nice to see.

After visit this section, you can exit the mission and head around the front to see the facade of the chapel from outside. 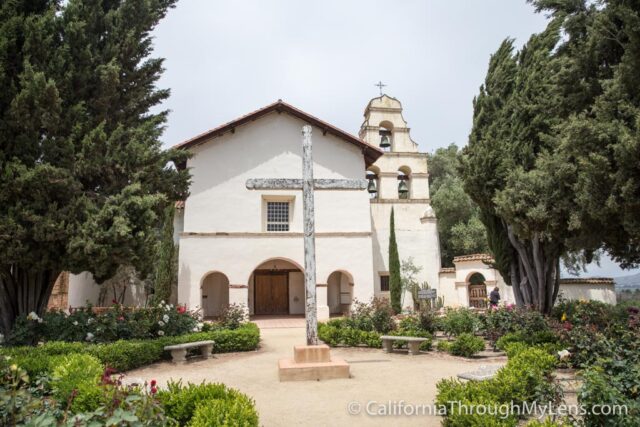 The exterior of the chapel is gorgeous, even with its standard white and brown color palette that all of the missions mimic. There is an old wooden cross and gardens outside of the main chapel, which provides for a beautiful photo. 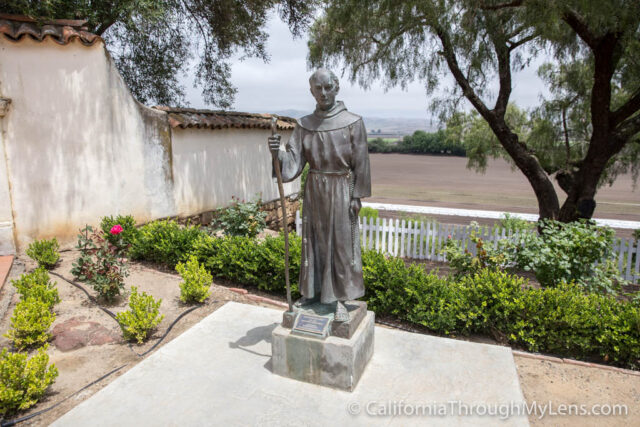 This is also where you will find the statue of Father Serra that is at every mission. After seeing all of this, you can head back to your car or spend some time exploring the state park the mission is connected to. I recommend walking through the state park as it has a lot of unique relics from the time period.

All in all, this is an excellent mission to visit, especially if you are looking to understand more of the Spanish history in California. You can read about my time at all the missions here and let me know what you think in the comments.