Mission San Luis Rey de Francia in Oceanside (north of San Diego) is one of the last missions founded, number 18. It was established in 1798 by Padre Fermín Lasuén. Even though the original church is no longer standing, the current church was built in 1811, and it is a fantastic example of Spanish mission architecture and style. This mission is one of the most popular to visit, and it is easy to see why when you are there; everything from the chapel itself to the cemetery and the museum hold a wealth of information on the mission and area’s history. It is a great one to visit if you only have time for a few, and here is all the information. 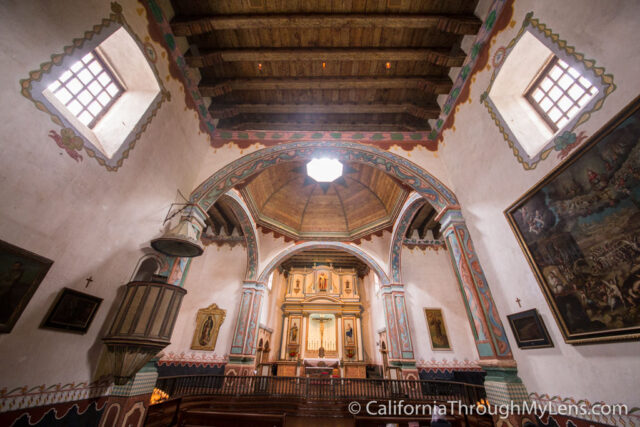 Mission San Luis Rey de Francia is located on Highway 76 in Oceanside, and it is on a big piece of property, so it is hard to miss. There is a large dirt parking lot for cars. 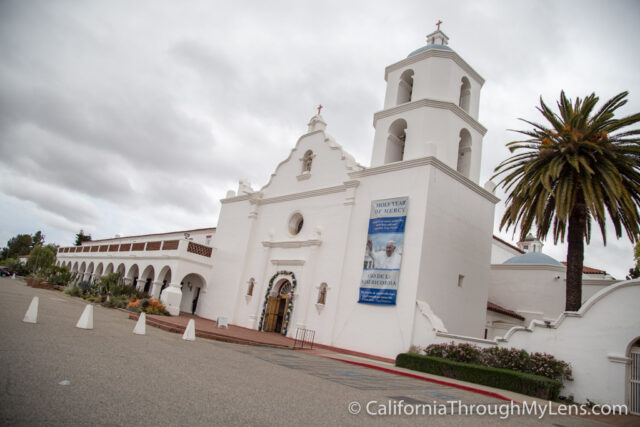 After parking, the first thing you notice will be the large mission facade that holds both the chapel and the museum. 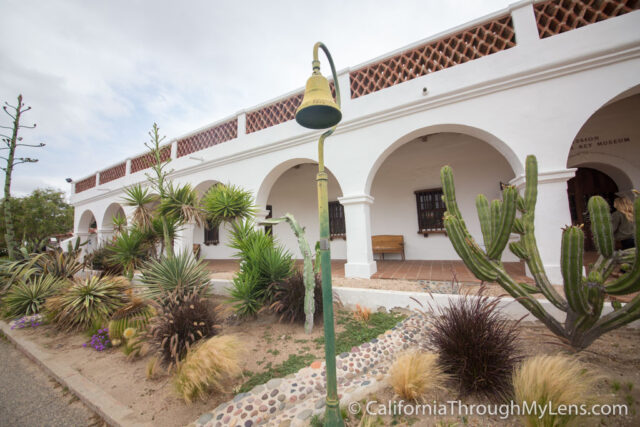 You can enter the chapel without paying, so it is an excellent spot to start your tour. 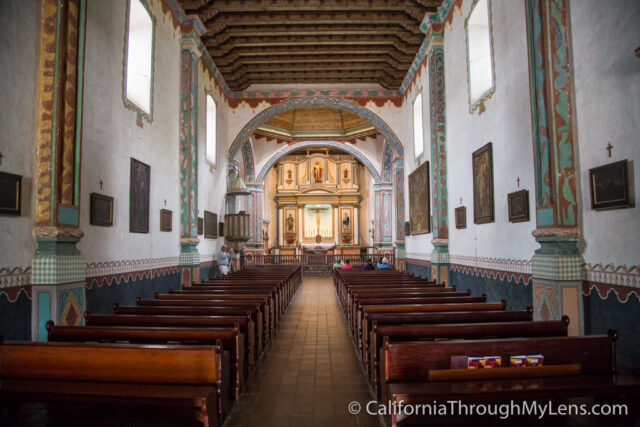 The chapel here is unlike any of the other missions in that it is laid out like a cross. When you approach the front altar, you will see not one but three main altarpieces, creating the t-section of the cross itself. 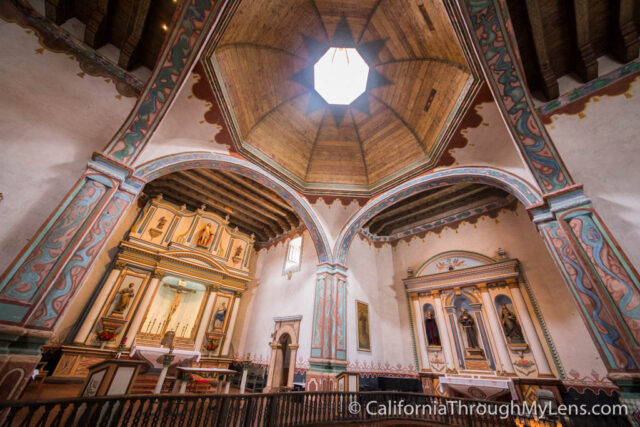 It is a beautiful chapel and one of the better ones you can see in the California missions. 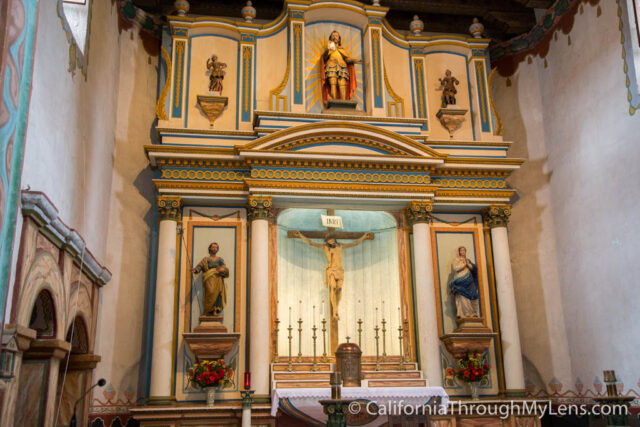 The mission architecture is a mixture of Spanish colonial and baroque styles with a large ceiling and Indian-inspired artwork. 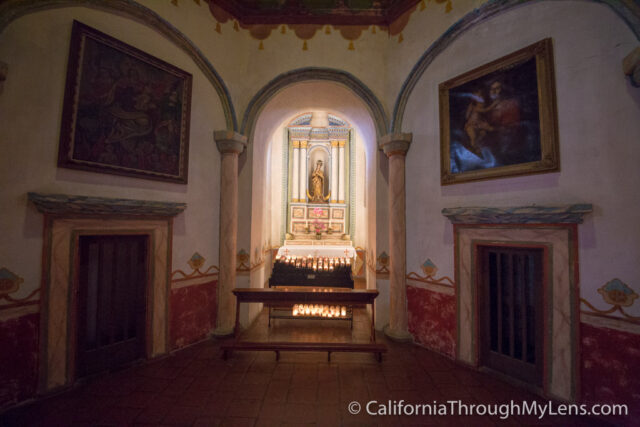 The chapel also has a separate Madonna room, which is off the main chapel. The Madonna chapel is octagonal in shape and used to be a chapel for the mortuary that is directly outside the exit. 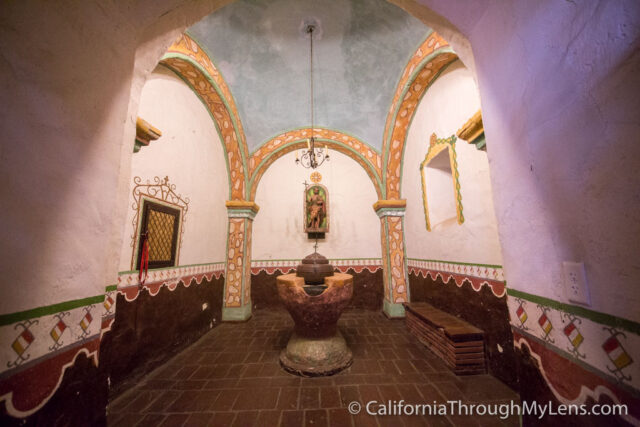 There is also a hand hammer copper baptismal in the back of the chapel to see as well. 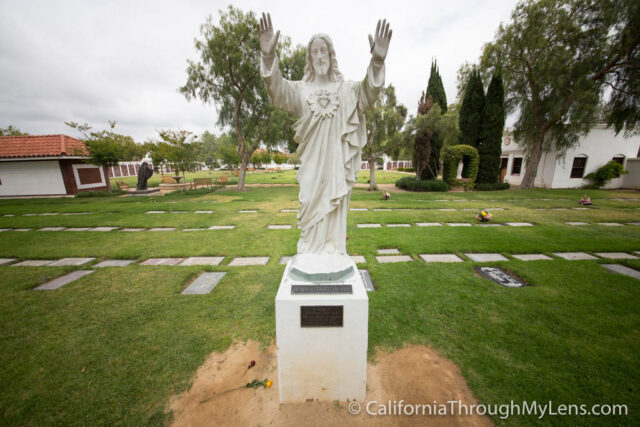 Outside and to the right of the main chapel, there is a large cemetery that is the oldest communal burial grounds in San Diego and which dates back to 1798. 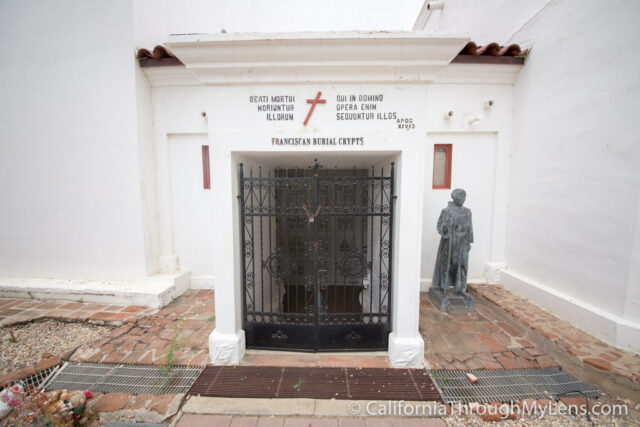 It is massive, and there is a lot to see, including an area dedicated to the Friars and the statue of Father Serra that is present at each of the missions. 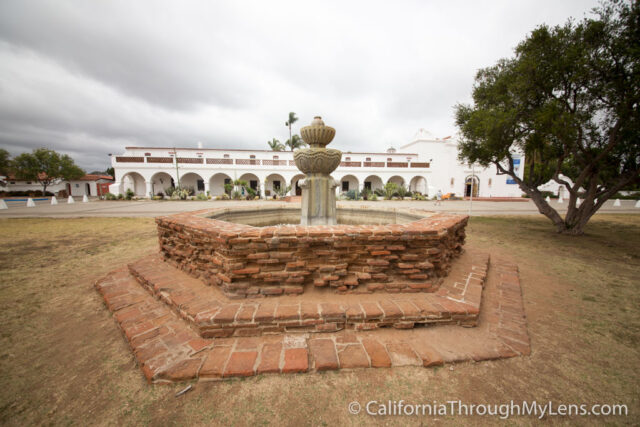 After exiting the cemetery, you can walk around the rest of the exterior and visit the fountain that is directly across from the museum entrance. 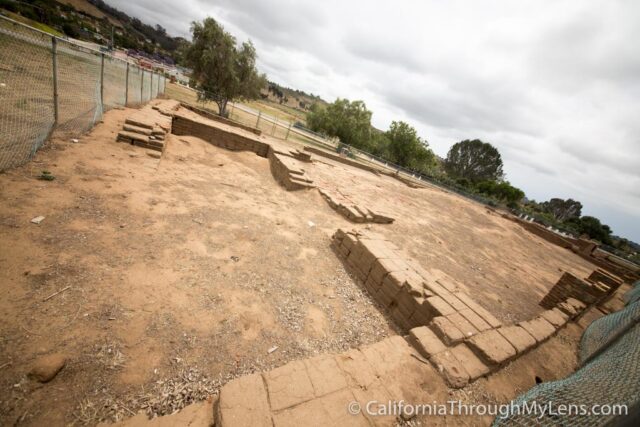 Behind the fountain is the old soldier barracks which does not have much left other than the foundation itself, but is still worth seeing. 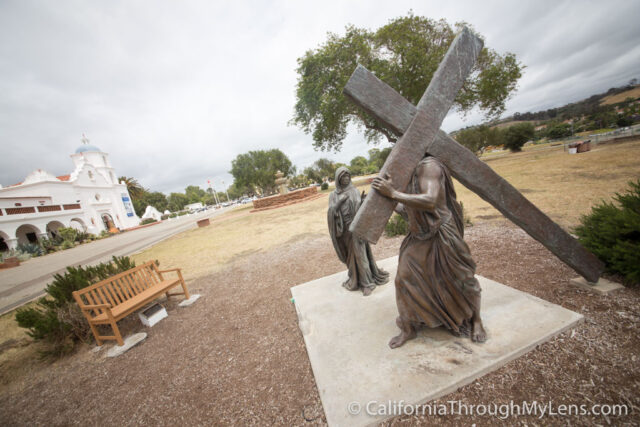 Proceeding up the road from the barracks leads you to the bathrooms and a viewing area for the courtyard. 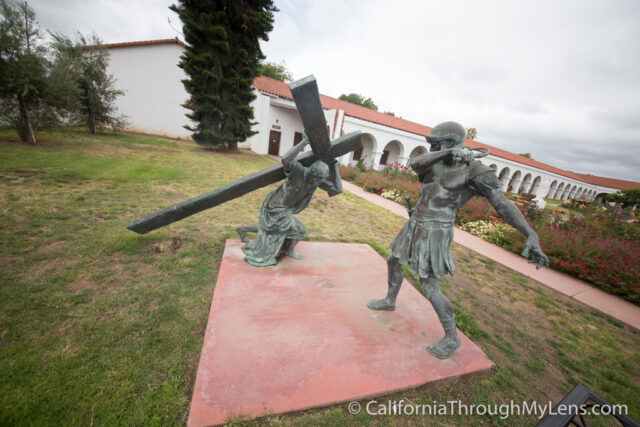 You can’t enter the courtyard since it is still the residence of many Franciscan priests, but it is beautiful to view. 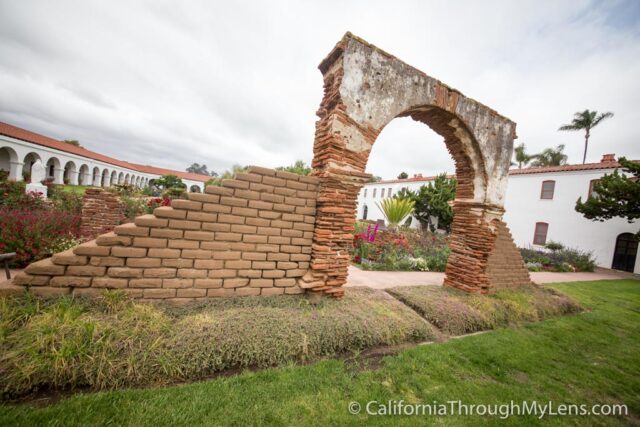 In the front of the courtyard sits the original carriage arch that stills stands to this day. 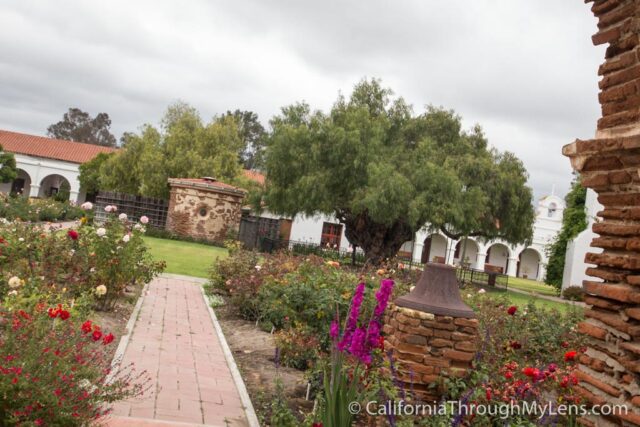 Behind it is the first pepper tree ever grown in California, which was given to the Friars by a sailor in 1830 from Peru. It is a massive tree, and the limbs have to be supported to stay up. After seeing all of this, you can head into the gift shop and pay your fee to enter the museum. 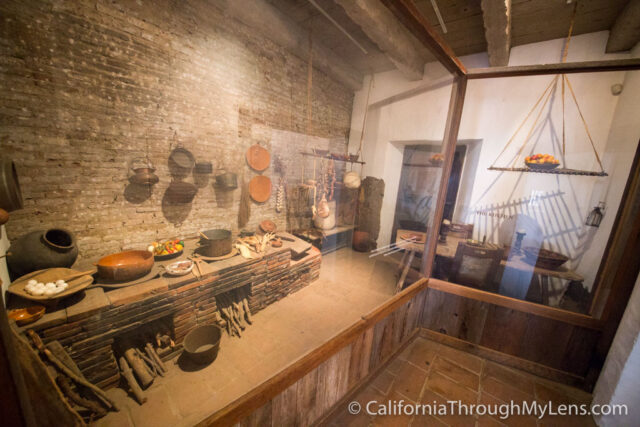 While the museum is $7 on its own, I would say it is probably the best mission museum for actual history. There was a ton about the missions, how they became secular, and how they eventually came back to the church. 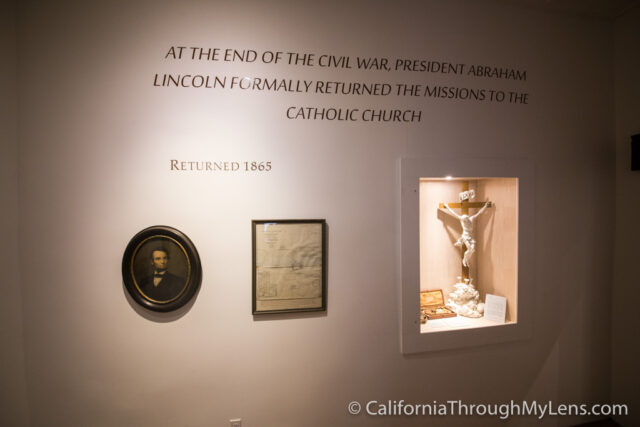 Here are what a few of the other rooms entail:

Background on the Luiseno Indians 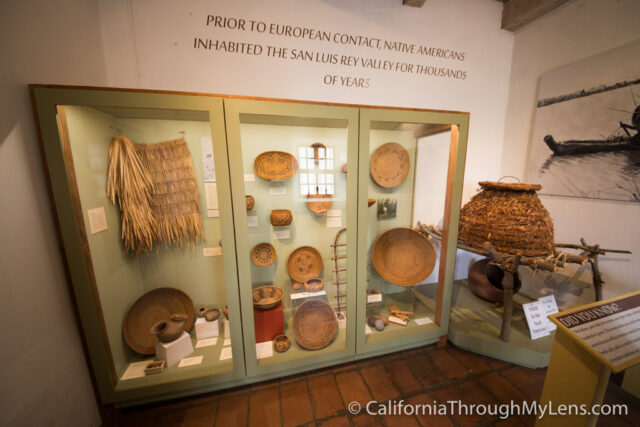 Artifacts from the Spanish missions. 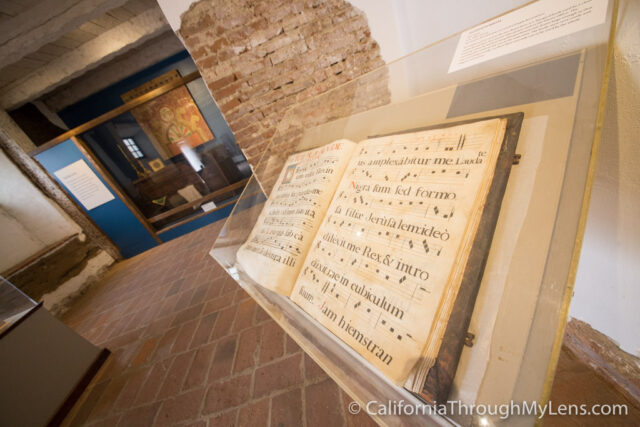 Information on the secularization. 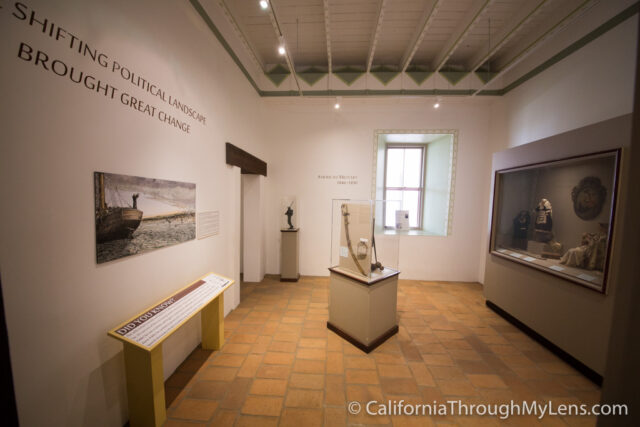 Restoration of the missions in the 20th century. 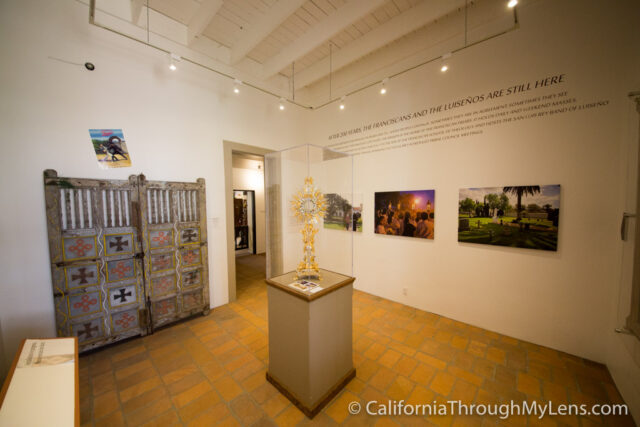 There is also a courtyard that you will walk into while exploring the museum. 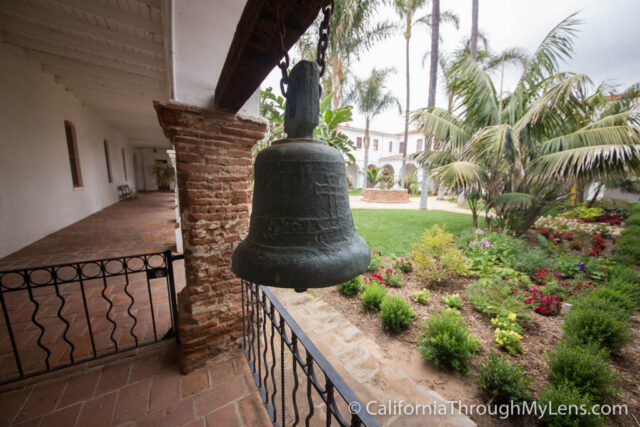 The courtyard had an old bell that I enjoyed seeing, but you can only look at the courtyard from afar. 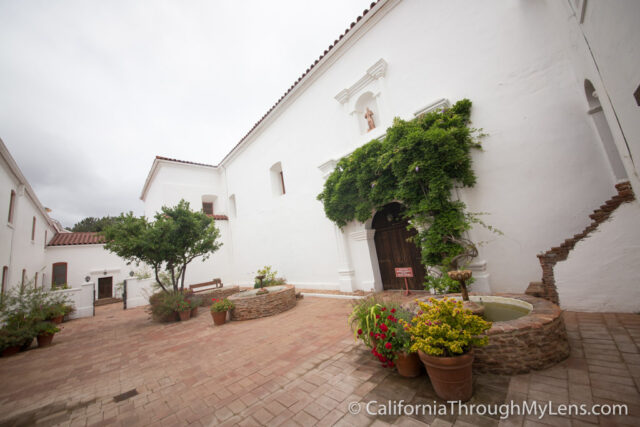 After this, the museum will exit you back out into the gift shop. 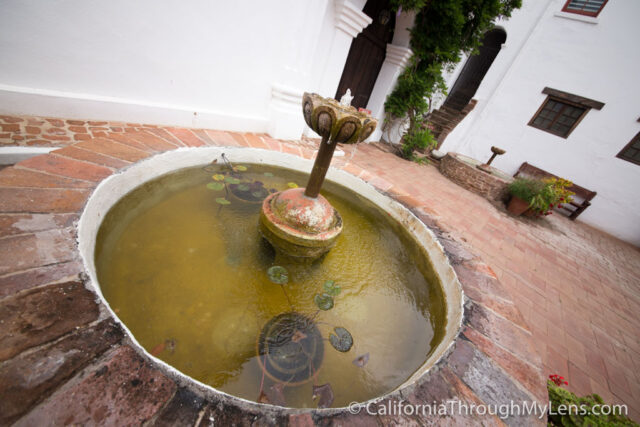 All in all, this is one of the better missions I have visited. The history and preservation are amazing here, and there truly is a lot to see. I would recommend you check it out if you are in the area and be sure to read about my road trip to all of the missions here.