Thanks to Dan for writing this fun guest post for us!

This unique spot is the site of old concrete pier ruins in the small coastal village of Davenport, which now is just a set of concrete pylons that used to hold it up. Davenport is located just North of Santa Cruz, on the northern edge of the famed Monterey Bay Peninsula. The town in general is a great place to explore, grab a bite to eat at a modest restaurant and enjoy stunning views of the beautiful Northern California coast! The pier is a spot known to attract photographers from all over wishing to capture the eerie but beautiful scene in one image. 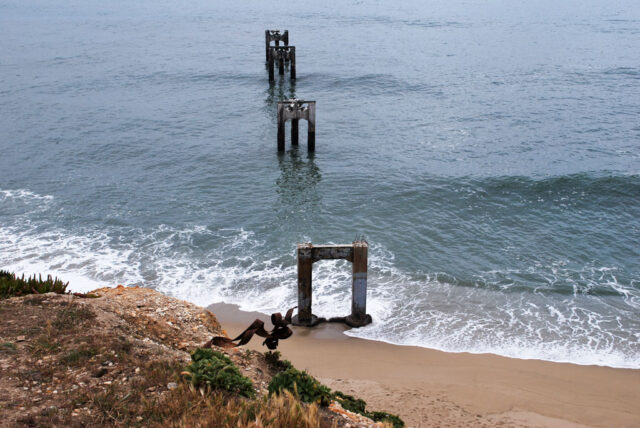 A whaling captain named John Pope Davenport settled at El Jarro Point, about half a mile from today’s town, in 1867. Davenport built a 400 foot wharf at the mouth of Agua Puerca Creek. This wharf was built to load the lumber brought down from the hills for shipment to Santa Cruz. A small village grew up around the port and was known as Davenport.  Agua Puerca Creek brought down so much mud that the port filled up and steamers could not tie up to the wharf to load lumber. A small extension did not solve the problem so a competitor built a longer wharf, but it was destroyed in a storm, leaving what remains today. Captain Davenport went bankrupt and moved to Santa Cruz.

The pier is down the bluff directly south of the massive concrete manufacturing plant which is located on Coast Road (CA HWY 1) north-west of the town. Right where the train line diagonally crosses the road there will be a dirt lot that is available for parking. 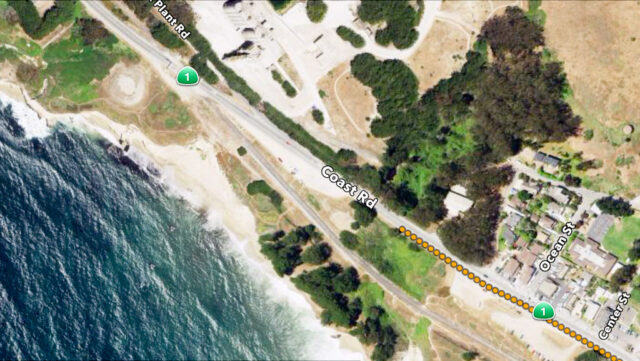 Above is a satellite image of the immediate area; the town on the right, concrete plant on the left, and if viewed closely, the pier pylons can be seen stretching out into ocean. Crossing the tracks and going to the edge of the bluff can earn you a spectacular view of the pier from above. 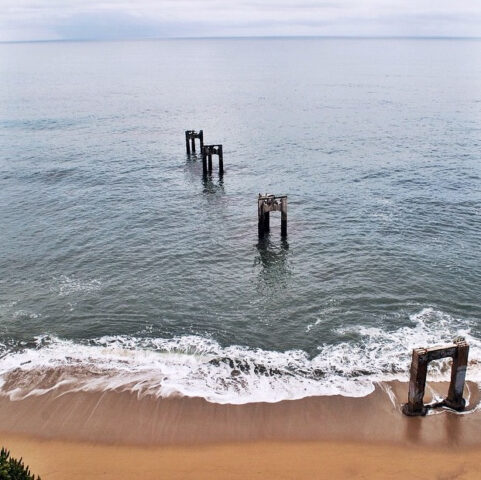 It is technically possible to get down the bluff to the pier on the beach, as there is a trail going straight down the cliff almost directly across from the dirt lot. However, this route is extremely dangerous and not recommended. A rope will be needed on the route for security while going down the loose shale bluff. So instead of this, I found my way down by trekking down and around the other side of the bluff. After passing though the small grove of cypresses trees on the left (east), you will come across a large gulch with a single track path leading down the middle of it. This path isn’t too steep, so it’s easy access down to a tiny beach which is partially blocked off from the pier by a cliff jutting out. 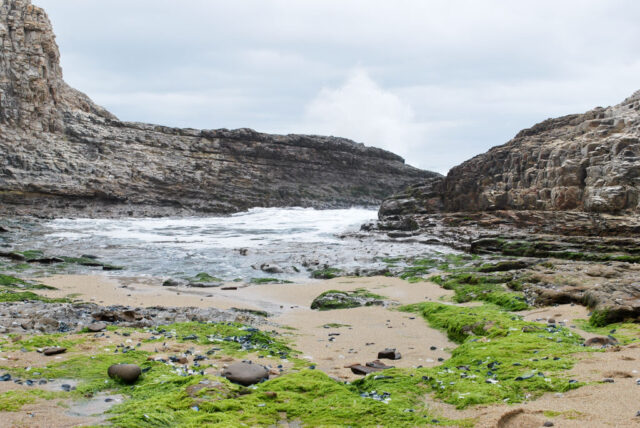 Looking out to the ocean, the pier is around the rocks on the right (west). This route can also be dangerous, for high tide will dramatically restrict access and there is a large “blowhole” in the rock. A blowhole is a naturally-formed hole in a flat segment of rock that water runs under and even splashes up. In this specific case, entering into the blowhole (falling) would mean the only exit is swimming out the front of the cave where the water enters and out. The water is extremely choppy and unpredictable in small coastal caves, so STAY AWAY FROM THE BLOWHOLE. The pier will only really be accessible in low tide, at which time it is a relatively simple scramble around the rocks onto the beach with the pier.

The above panorama is looking west. On the far right is the rock edge jutting out that you will have to maneuver around. It is almost always secluded at the pier, meaning plenty of photo ops for you!

My name is Dan Franz and I’m just a guy who loves to explore. Ever since I was a kid I have always had a desire to be outdoors, taking in as much beauty of God’s earth as I could. I have also gotten into photography, primarily to document the adventures I have gone on. It continues to astound me how many places there are to see (just in California!) and how quickly time passes! I’d much rather be “inside the outdoors” than anywhere else.