Tucked in the hills of Simi Valley, overlooking a beautiful expanse of farmland, sits one of the most amazing presidential libraries in the United States. Not only is it full of information on the history and life of this famous president, but it also houses Air Force One, which was used to fly everyone from Richard Nixon to George W. Bush. It is a fantastic spot for a visit, and here is all the information. 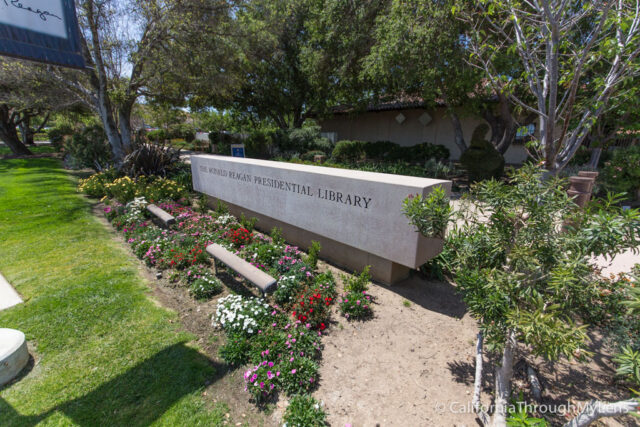 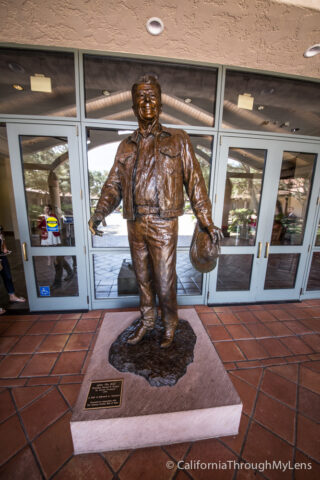 Since I was with a group of people, we were able to schedule a docent lead tour. Typically this museum is self-guided, but if you have a group, you can often call ahead to get a guide. Here is what we saw on the tour.

The Hangar & Air Force One 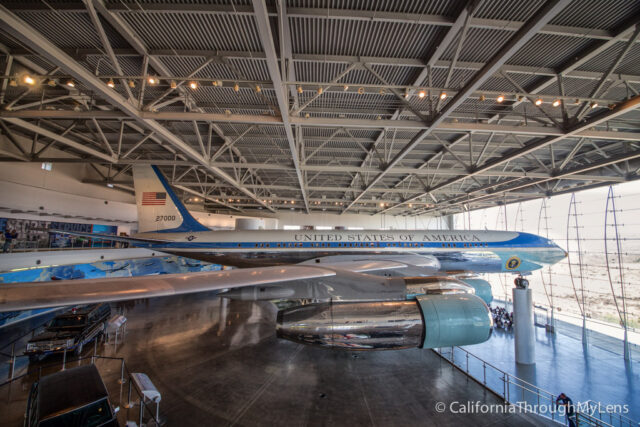 We opted to walk to the hangar first before heading into the museum proper. The hangar houses a lot of information about Air Force One itself, including where it flew, how many miles, and of course, the actual plane. 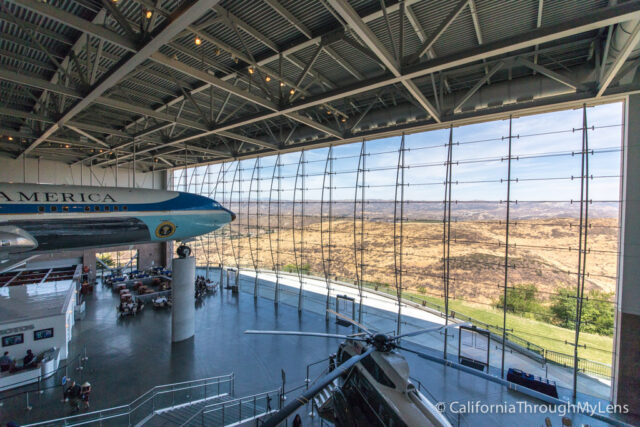 The top floor has a few different exhibits that show the history of the plane. The one you will see when you first walk in is an exhibit dedicated to the number of miles flown per year of the plane’s existence and a map of where it went on its trips. 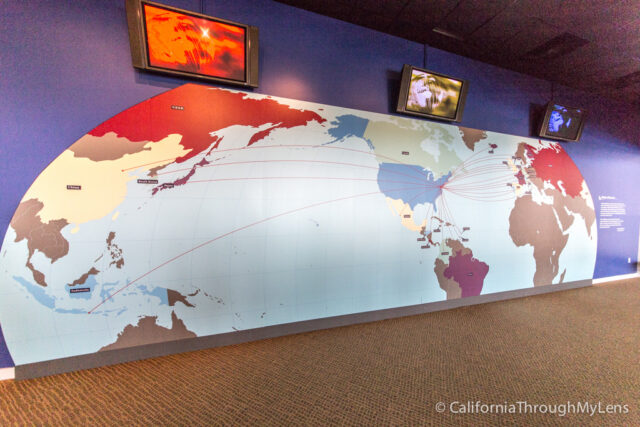 Next, you will see an exhibit about how the plane was taken from where it flew to where it is now sitting. It looks like it was a feat of human engineering to get it here, much like what it took to get the space shuttle to the California Science Center. 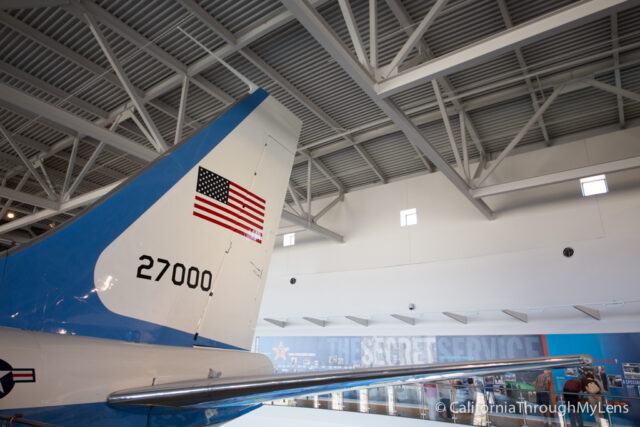 From there, you can head onto Air Force One itself. No photos are allowed in the plane, but it has been meticulously kept up, like it was when President Reagan was flying in it, and it is a lot of fun to explore. There is even a cake in the back as it was said that President Reagan always had a cake on the plane so that anyone who had a birthday could celebrate. From there, we headed down to the second floor. 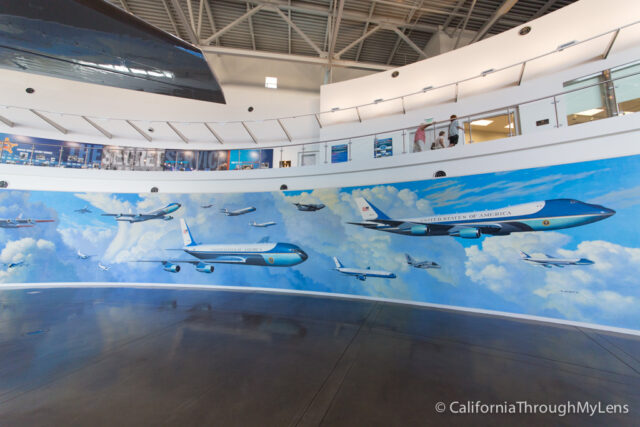 The second floor has a mural of all the different planes that have taken presidents through the years. The first of these planes was an orange beast that Jackie Kennedy disliked and ended up changing the color scheme to what it currently is. 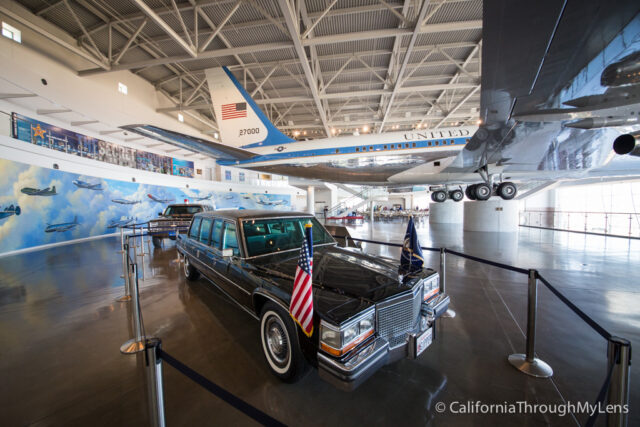 They also have an example of the motorcade, including the limo from the attempted assassination of President Reagan. 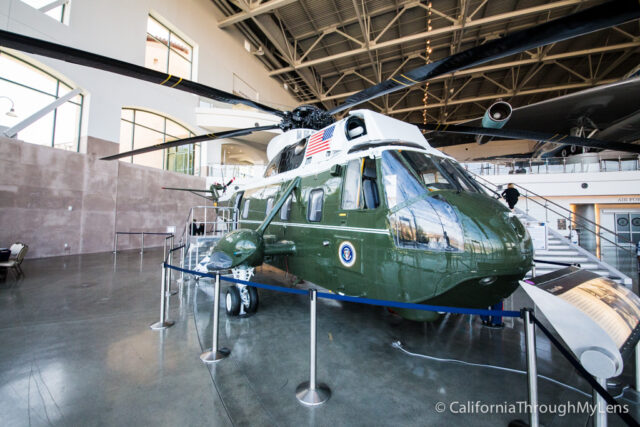 Lastly, on the bottom floor is a helicopter that took the president around and an Irish pub whos parts were all shipped in from an actual pub President Reagan liked in Ireland when it closed. 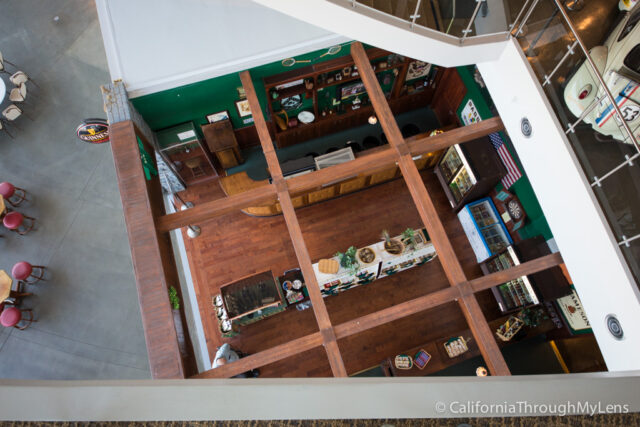 After visiting this area, you can head out to the rose garden, which is a one-third replica of the one at the White House before heading back into the main museum. 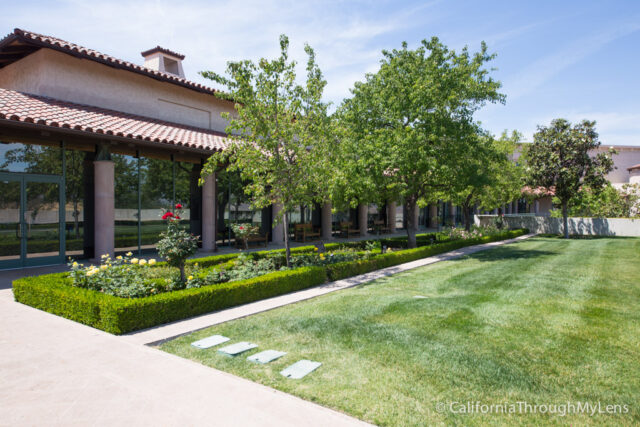 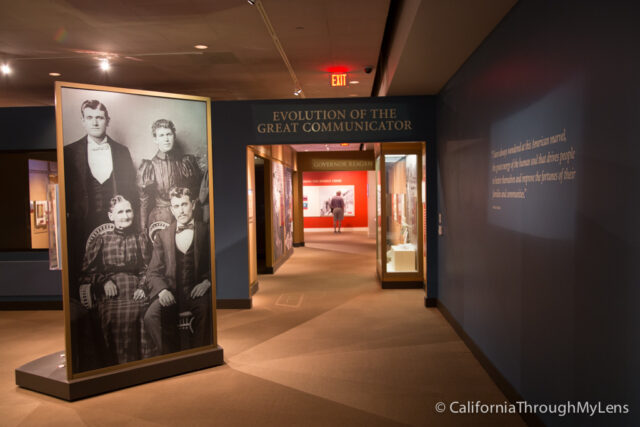 The museum is massive and has a ton of exhibits. It is one of the better museums I have been to and was fascinating to walk around. Here are some of my favorite parts. 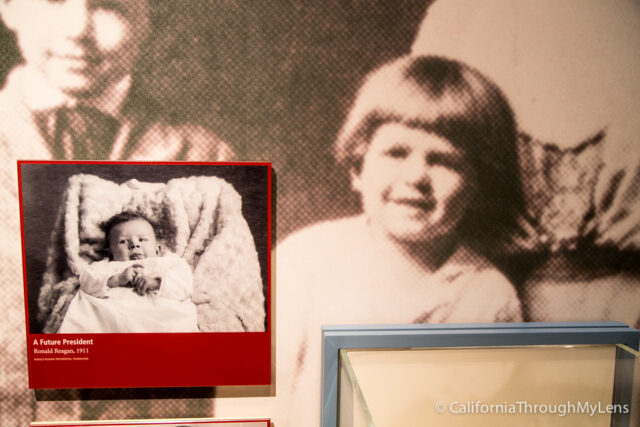 It is always fun to see where a famous person grew up and lived their early life. President Reagan is no exception, and his awesome photo as a child is what earned him the nickname Dutch that he had for many years. 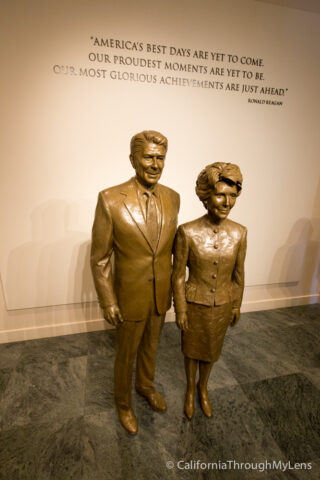 This part of the museum also showcased his years in radio and eventually in the Hollywood movies. 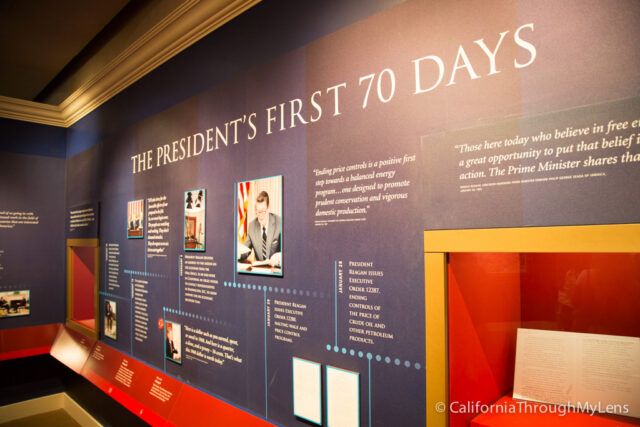 From there, the museum spent a lot of time on his political career. Some of the things I found most interesting were the four summits, the Berlin Wall, and the information on the failed assassination attempt. 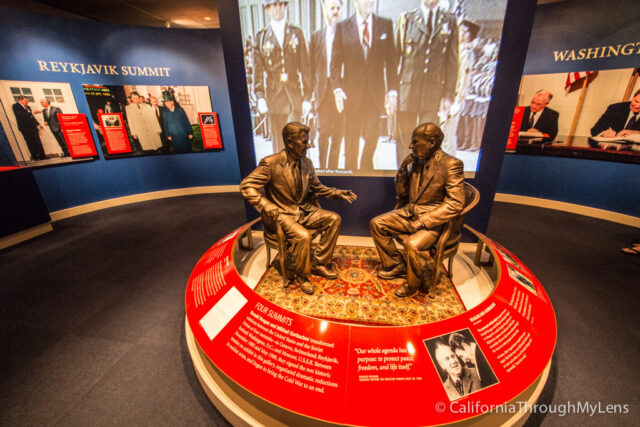 His four meetings with Mikhail Gorbachev that helped to usher in the end of the Cold War are on prominent display and well done. Each corner of the room features one of the four meetings and discusses the outcomes. There is also a detailed bronze in the front of the room as well. 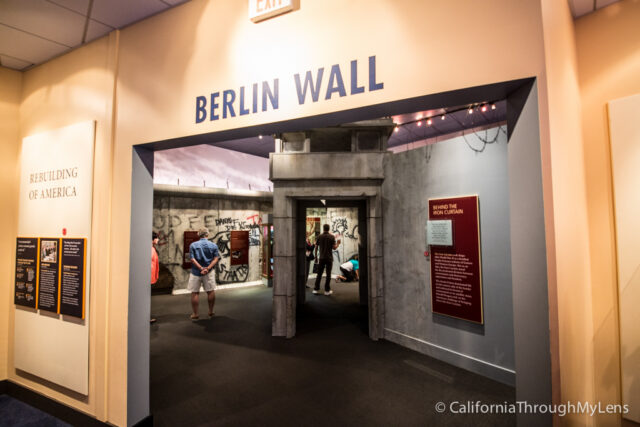 The Berlin Wall is another crucial part of his presidency, and you can read all about it. The exhibit is interactive, making it fun for kids to explore. There is a real piece of the wall outside as well, but more on that later.

The Rise of Communism 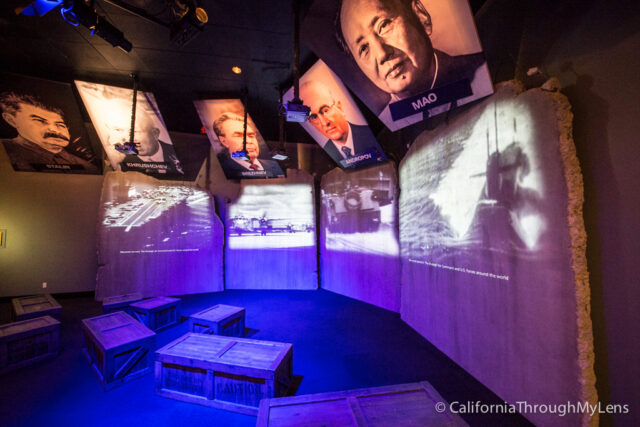 In this area there is a video that showcases the rise of communism and has a wall dedicated to the famous people from that way of thinking. Our guide dubbed it the villain’s wall. 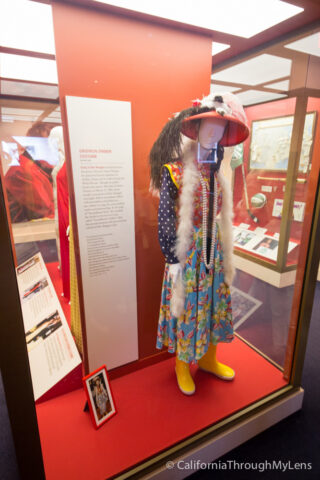 There is an entire area dedicated to his wife’s dresses, and as a non-fashionable man, I was not super interested; however, I did stumble on the above gem, which was from a time when she dressed up for a media appearance as a joke. Yea, it is a pretty fantastic outfit. 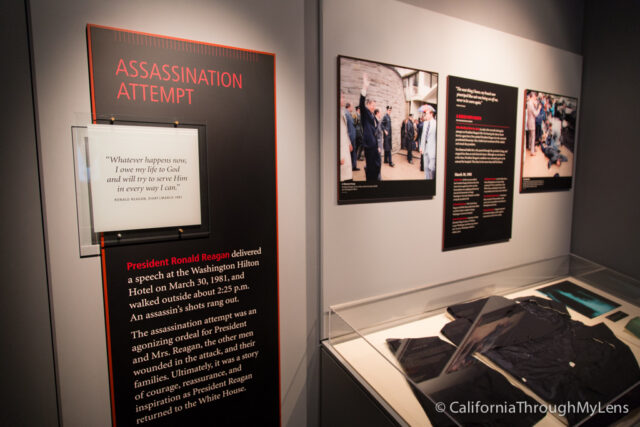 One of the most fascinating places in the entire museum is the area dedicated to the foiled assassination attempt. They have a real video showing what happened, information on how the secret service stepped in, and saved his life and a lot of facts about the event. I was enthralled by how detailed it all was and found this area to be one of the most unique. 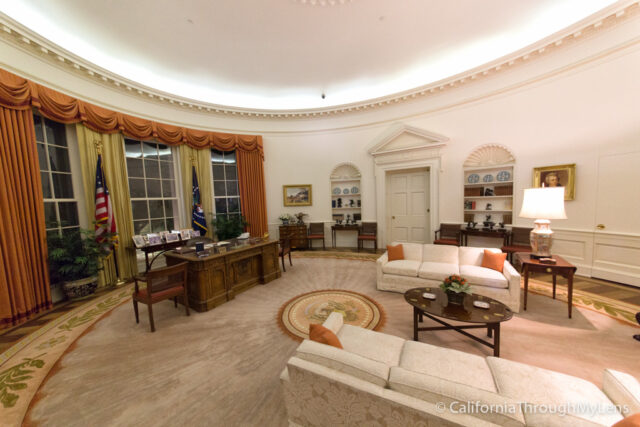 Near the end of the interior portion is a complete replica of the Oval Office. President Reagan wanted it to be exactly how it is so that others could see it up close when they visited, even down to the height of the ceiling. I, for one, really liked the detail and thought it was a fantastic display to have at the museum. It does make you feel like you are in the White House when you look at it. 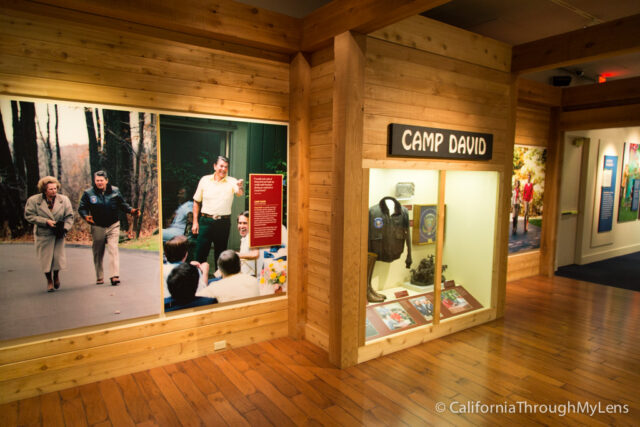 The famed presidential retreat is on display as well, with lots of information dedicated to President Reagan’s love for horses. There is even a replica horse you can sit on for photos and a bunch of his personal saddles here. 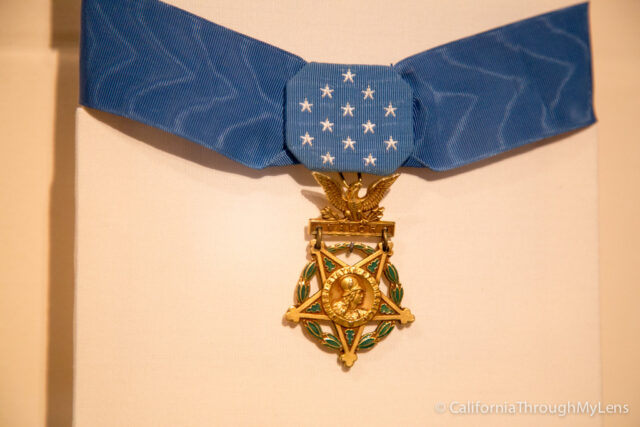 I was excited to see this medal up close as I had never seen one in person before, and they had one on display.

A Beam from World Trade Centers 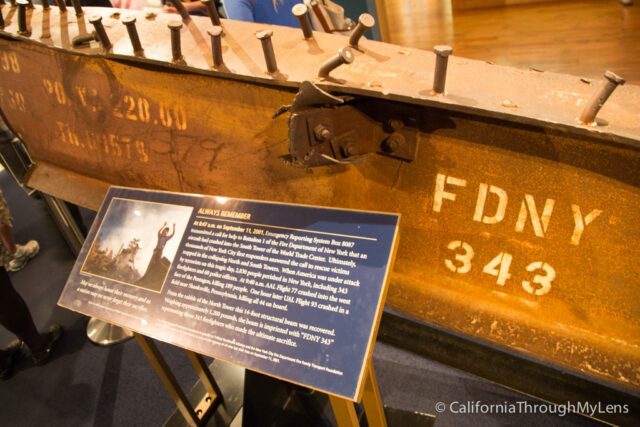 They also had an actual beam from the World Trade Center attack that you could interact with and read about. 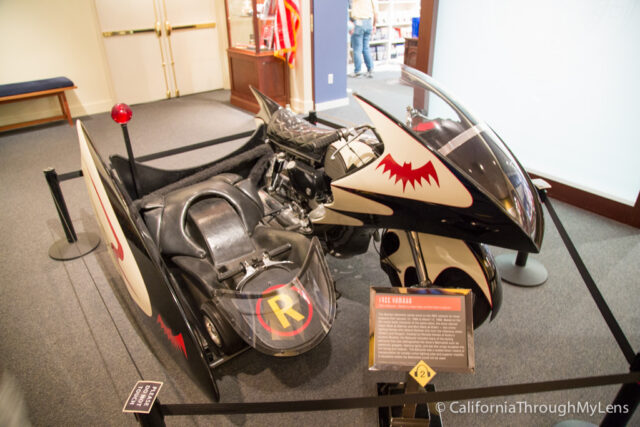 Lastly, as I was exiting the museum, I ran into the Batcycle from the TV Batman show. I guess they were having a famous car exhibit, which I was unaware of, so this was a pleasant surprise as I am a pretty big Batman nerd. 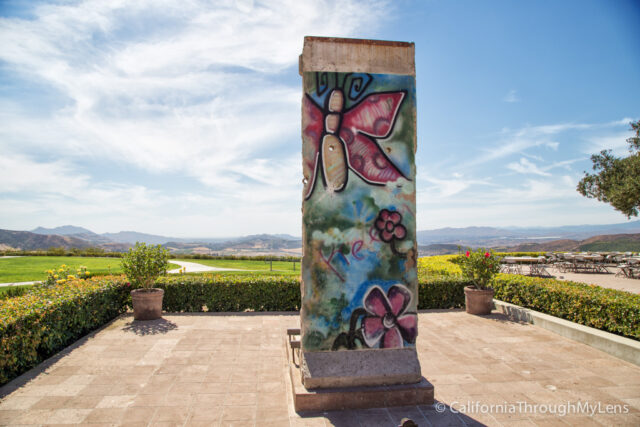 After making your way through all of the exhibits, you will want to make your way outside. There is an actual piece of the Berlin Wall there, which overlooks the countryside below and the ocean on a clear day. It is a great place to sit and have lunch or just to stroll and take in the view.

Also, there is where President Reagan’s final resting place is, and you can walk around the gravesite as well. I found it to be a beautiful tomb to a great man. 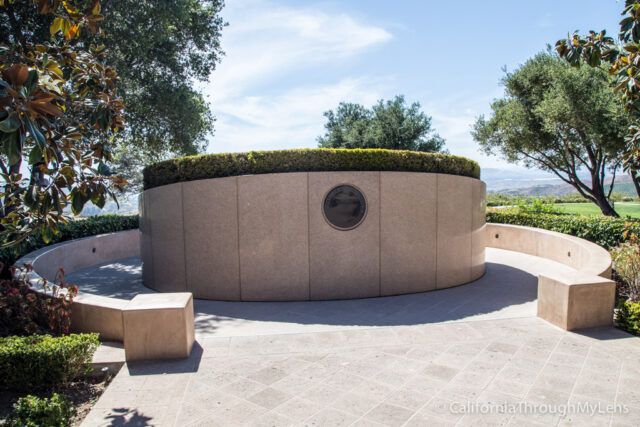 I feel this post should end with a collection of some of his famous sayings that are seen all over the museum. Here are some of my favorites: 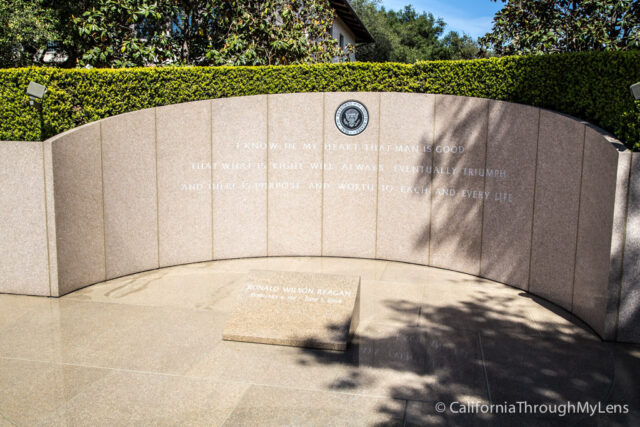 “The story that will be told inside the walls…is the story not only of a Presidency but of a movement – a determined movement dedicated to the greatness of America and faith in its bedrock traditions; in the essential goodness of its people; in the essential soundness of its institutions; and, yes, faith in our very essence as a nation.”

“I have always wondered at this American marvel, the great energy of the human soul that drives people to better themselves and improve the fortunes of their families and communities.”

All in all, this is a fantastic place that deserves a half-day of your time. You will likely get enthralled with the history like I did while marveling at the size of Air Force One. Let me know what your favorite spot was in the comments.