The San Francisco Nike Women’s Marathon, AKA, the run with a Tiffany necklace at the end. It is one of the most popular half marathons in all of California and has a massive waitlist to get in each year. Amie did it this year (2014) and loved it, so we wrote a post together with her experience as a runner and mine as a spectator, check it out below. 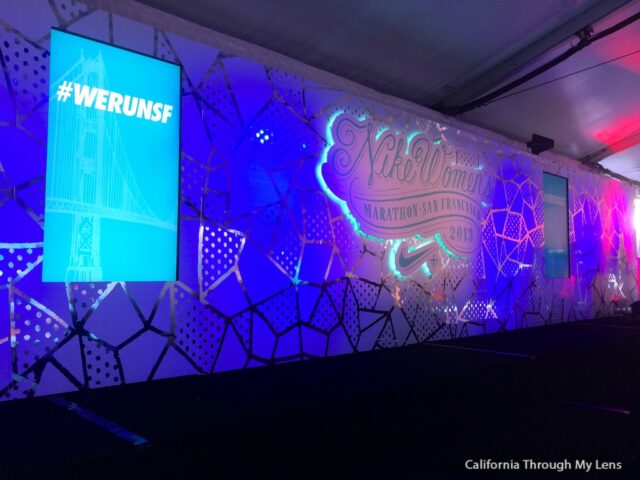 As a Runner (Amie)

The Nike women’s marathon, 30,000 women, coming together to run the miles between them and their medals, a Tiffany and Co. necklace presented by a San Francisco fireman dressed in a tuxedo. After hearing about this race from a friend, I decided I wanted to start running in the hope that one day I too would receive the best medal out there. So I formed a group of girls, and we entered the random drawing process as a team, which betters your chances of getting chosen. After a month of waiting, we received the emails that we were chosen, and the training started. 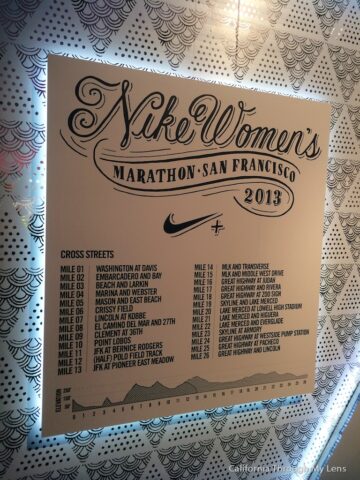 First off, book your hotel ASAP. We stayed as close as possible to the start without spending a fortune at a hotel called the Holiday Inn Golden Gateway. This hotel was about .8 miles from Union Square, where everything happens, so you could easily walk or take public transport there. I arrived in San Francisco Thursday evening, and I picked up my race pack Friday afternoon then toured the Expotique area. 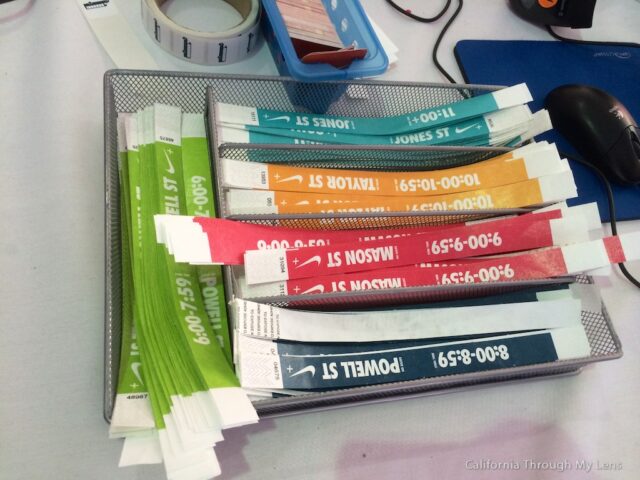 Both the registration and the Expotique were well staffed, and I experienced no lines, though as the evening came, everything became more crowded, and I heard Saturday was pretty crazy. Not only did I receive everything from makeup advice to food samples, but the sponsor of the race also handed out some pretty good swag. 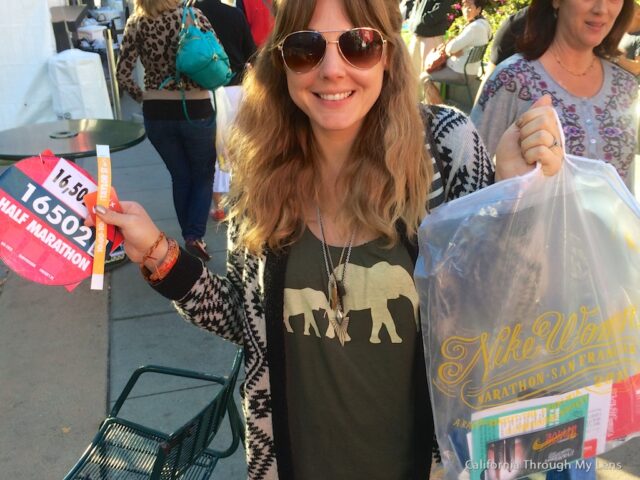 You could even get your hair and makeup done for free if you wanted to. A few other things you could do in this area was shop in the surrounding stores for special race gear with the specialized logo and see Nike’s newest gear. 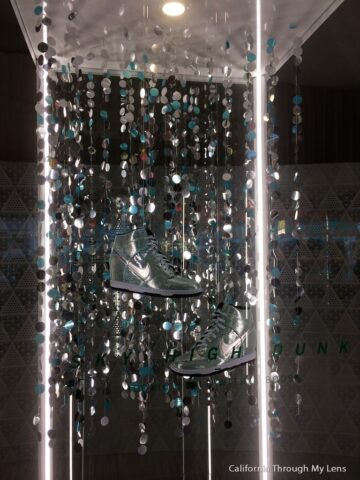 I recommend going to the Expotique as it makes you excited for race day. Plus, you get some fun free stuff and you get to be around all the other women who you will be running with. It made me feel like I was a part of something exciting. 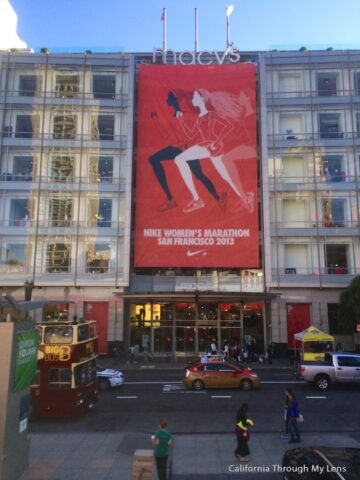 So Sunday morning finally came and greeted me with a 4:45 AM wake up call. After getting ready and meeting with my team, my dad drove us over to the start, and it was freezing! Make sure you plan on colder running gear and especially a headband that covers your ears. We shuffled into the race pens according to our projected pace, and we waited. 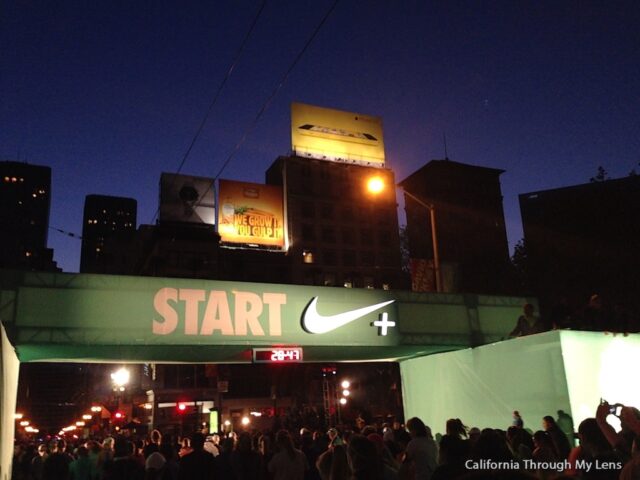 While we passed the time, they had people on loudspeakers ramping up the crowds and even taking you through some warm-up stretches, which helped take your mind off the cold and how early it was. The first wave left at 6:30 accompanied but a countdown and fireworks. This continued with each new wave of runners. 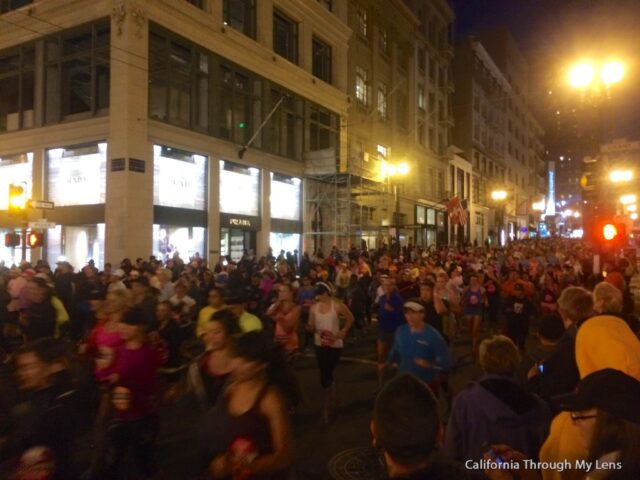 It was a very crowded start, but with 30,000 runners, most of the race felt that way. That being said, it was nice to run with a bunch of women and a few good men that kept you motivated. Also, there were so many people cheering us on with signs and bells. We found our friends and family at a few points on our run, which kept us motivated. The course was beautiful and took you all around San Francisco, even though it was mostly covered by fog. 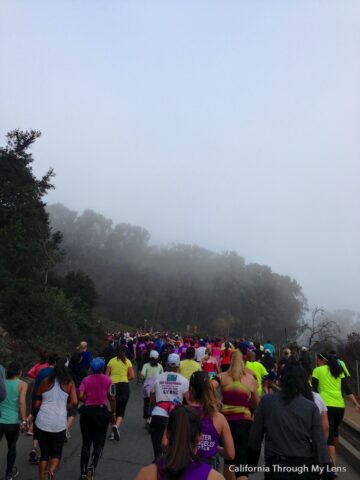 Also, scattered every few miles was water and snack stations, which were nice to refuel and hydrate along the way. The course was well-marked as were each mile, so there was no guess-work involved, but with that said, there are hills. Plural… HILLS. Some steep, some gradual! I wish I would have done more training on the hills cause even walking up them wears on your legs, but I made it up and down them! 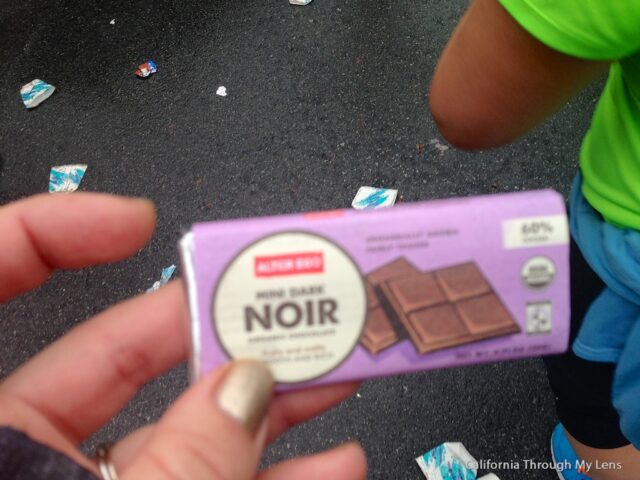 After mile 9, the hills were done, the Golden Gate Park is in sight, and the end is near. The spectators also started to multiply, which helps your energy level. I was so happy to see the Tiffany blue finish sign and ran through with a smile ready to receive my necklace. 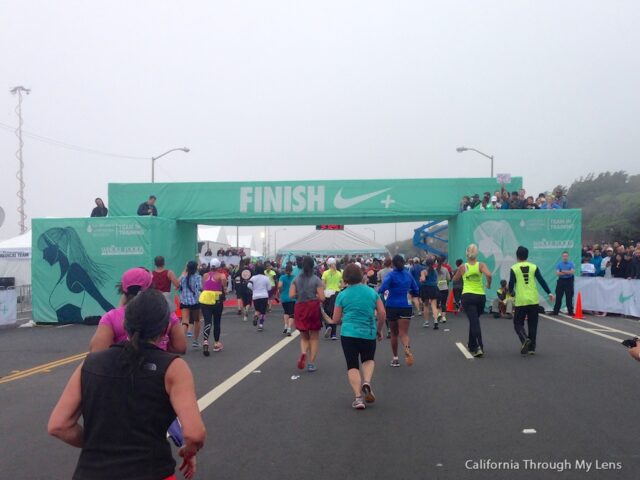 After running through the finish, I was greeted by a crowded line of runners waiting to go through a series of stations to get your goods. I understand the want to be organized, but man did it suck to finish your run by standing still in the cold. Not good for your legs. Eventually, we did make it to the fireman who handed us our little blue box, and then a few steps ahead, you could take a picture with a different fireman dressed in a tuxedo. Awesome! 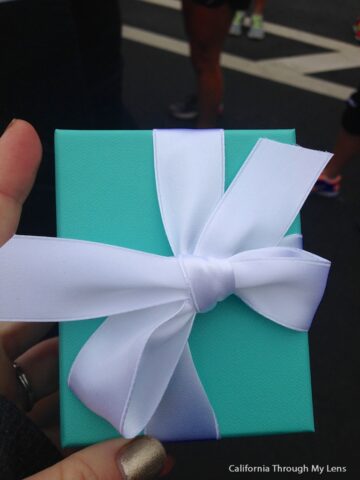 The next few stations are grabbing your shirt, a bag with food and goodies in it, and an emergency blanket, which you will want all! One member of our team finished 30 minutes before me and had no lines.  What a difference a little bit of time makes. It was chaos when I finished. Make sure you either have a phone or game plan to meet up with people cause it is not easy, but you will be on an adrenaline high after completing it cause it is such an awesome race. 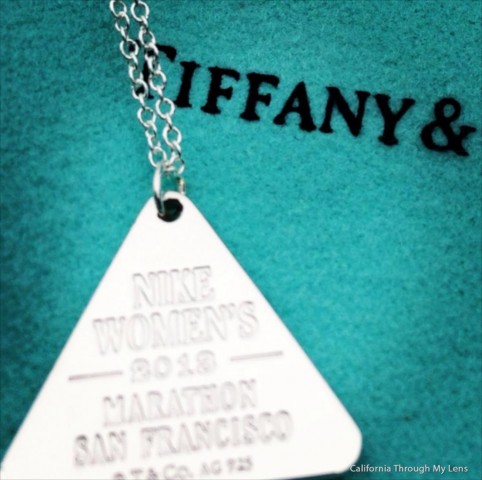 So that is runners view of the Nike Women’s Marathon in a nutshell, I would totally rerun this, not just for the Tiffanys necklace but the whole experience. Now Josh will talk about if being a spectator was as fun as a runner. 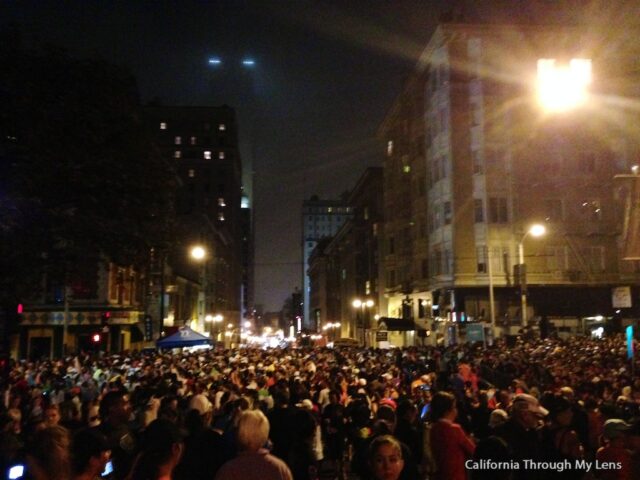 After waking up at 5:45 AM and arriving at the area for the race, we followed the massive crowd to the starting line. The streets were full of people, and there were Starbucks cups everywhere, I even saw women running with them, and every trashcan was full of them! 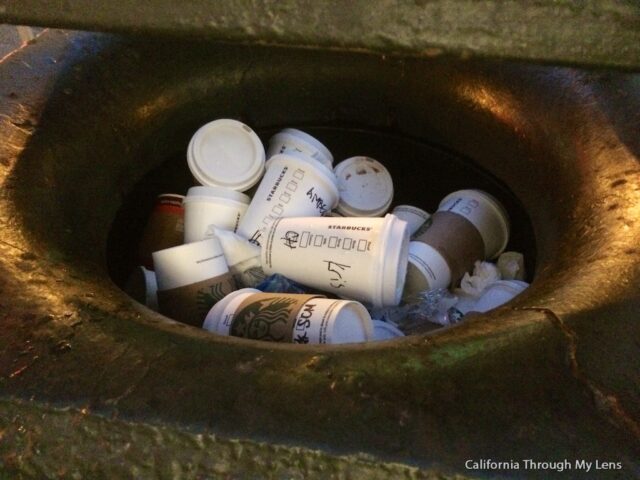 As the runners from the first wave were going by, we checked out the app that was supposed to track the runners. It was a cool idea, but it never worked for me, and I heard a ton of people complaining about it. Either that or Amie never left the starting line and just took a cab to the end. 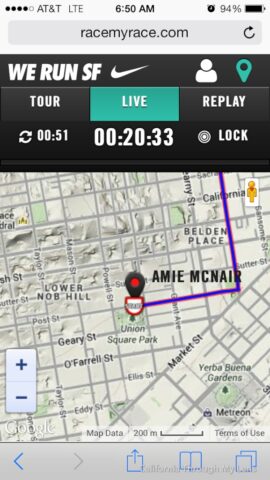 We waited for our group of runners to go by and then proceeded to the transportation line that we paid $20 to ride. This would have been fine, but whoever set the area up had all of the buses on the other side of the starting line. Thus we had to wait for every woman to get past the street for the buses to come across, which was about 45 minutes after the race started. This forced half the people to miss the 3-mile cheering point and just proceed directly to the 11-mile area. 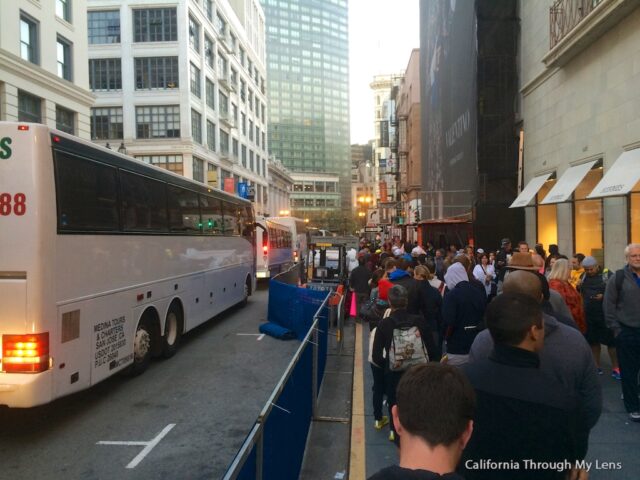 The buses were comfortable, so it wasn’t a bad ride, but they dropped you off about a mile away from the cheering area, so you needed to fight the crowds and walk the mile to where the runners came around the corner. Since we got here early, it was nice and peaceful cheering on the runners, but after that, it developed into a sea of people. 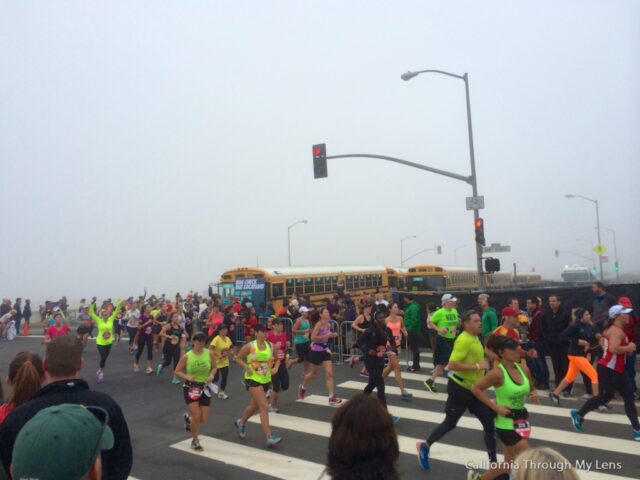 It was fun to see them run past some of the iconic areas like the windmill in Golden Gate Park though. 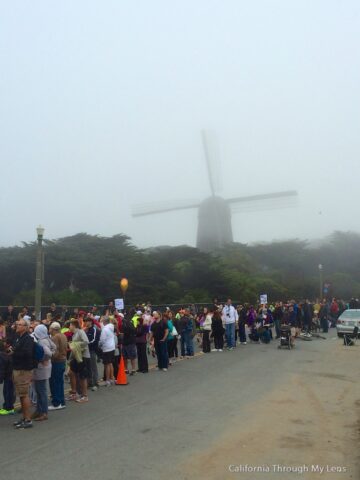 The walk to the end is short, and that is where the chaos began. You could hardly move in-between the people, cell phones didn’t work, and it was just complete mayhem. I wanted to see Amie cross the finish line, but there was no way to get close, so I just stood at the end of all the people and tried to connect with the others I was with via text to no avail. 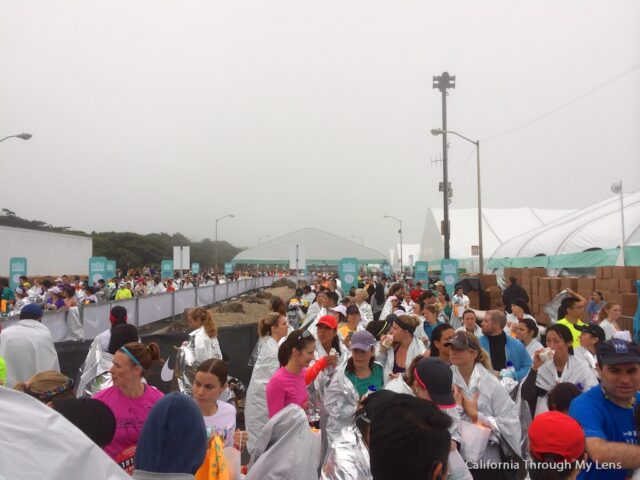 After about 45 minutes of waiting and looking around, I found Amie and her friends and was able to celebrate her accomplishment! I was even able to show off the free sign I had made at the expo. 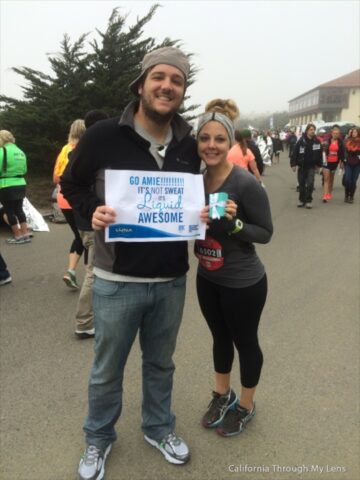 Waiting in line for the shuttles to get back to Union Square was a lot better then I anticipated though, they had set up the area well, and we got on with no problems. They did say that this was double the amount of people they had the year before, so I am sure they were still trying to deal with that many people in one place. 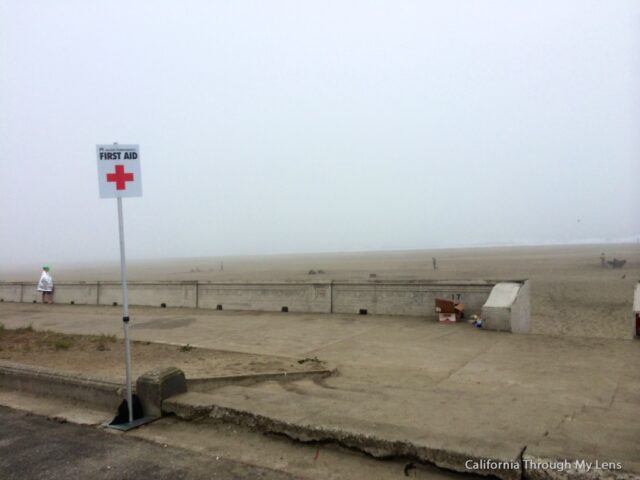 My recommendations for spectators. Bring a jacket and a book. Grab a coffee, and make sure you realize it will be a hectic day for you as well. Try not to punch anyone.

All in all, I am glad Amie got to have so much fun on this race, and I hope this helps you understand what it is like to be a spectator and a runner so you can plan your trip as well if you do it next year. Make sure to leave a comment below.