285shares
Watts Towers is one of those places I knew very little about before visiting. It kept coming up whenever I would research the best places to see in LA, but there was not a lot of information or photos on it other than just recommendations to go check it out. I added it to my list and set out on an epic trek through LA with a visit to the towers. The Watts Towers were first on this list, and I am glad that I went. They are a marvel of one man’s fantastic mind to create these statues and dedicate so much of his life to this goal. Read on for the full review. 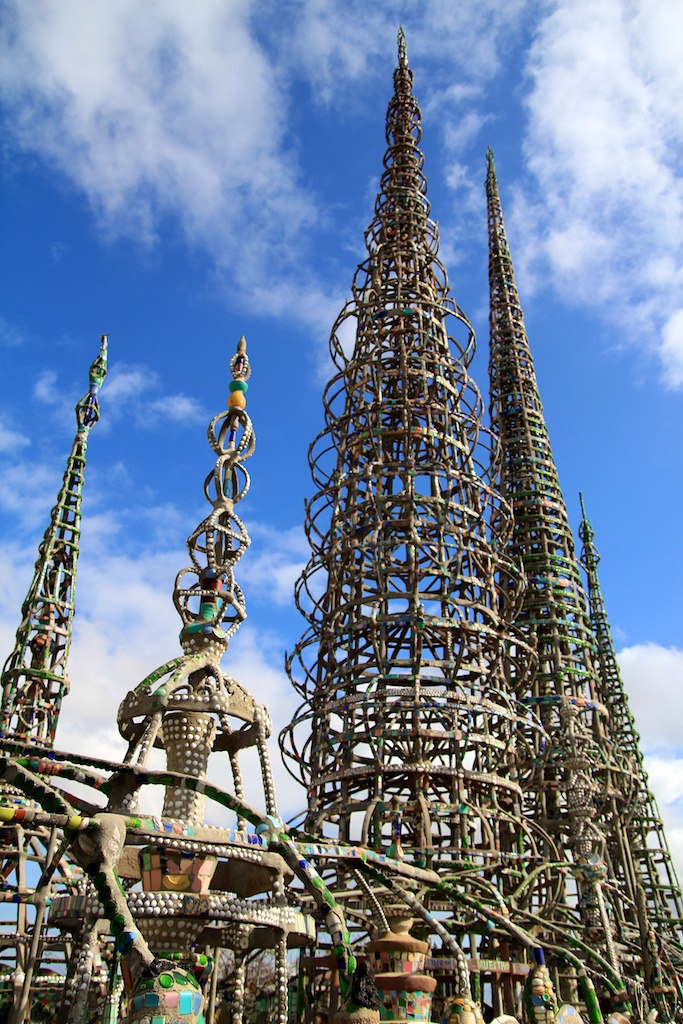 If you are thinking about heading down to check out the towers, make sure you check the times that the tour will be going. Without going on one of the tours (costs 7 dollars in 2012) you will not be able to go into the area with the towers; you can only look at it from the outside. On Saturday when I went, the tours ran from about 10:30 AM to 4 PM, every 30 minutes, but check the website before you go, this is not an area of the town that you want to find yourself wandering around in. 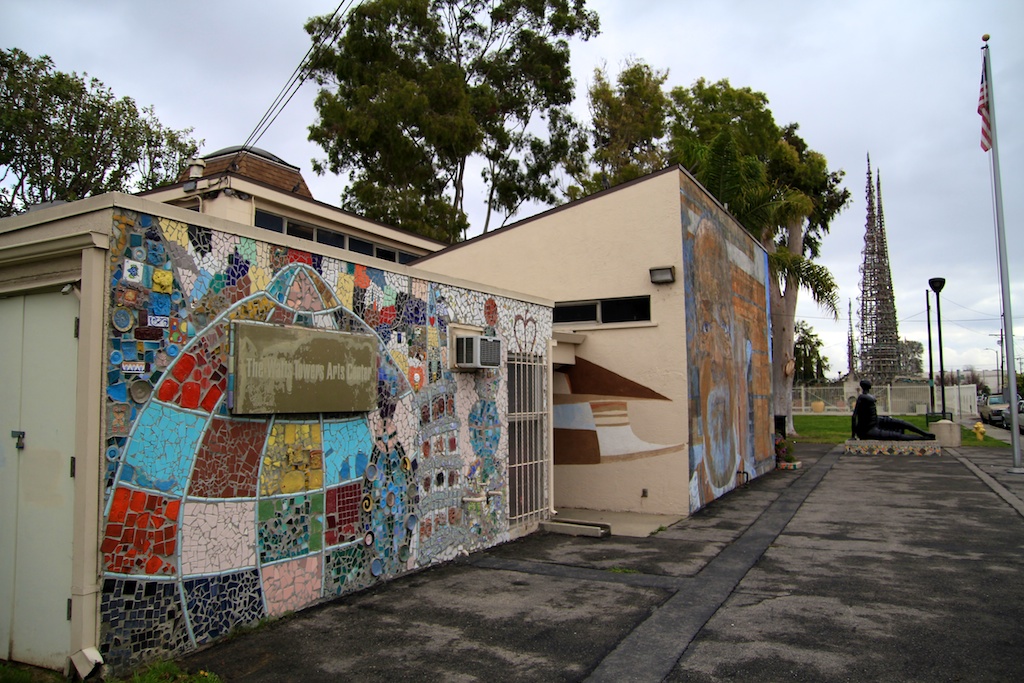 A little history on the builder Simon Rodia and the towers is as follows.

“The Watts Towers, consisting of seventeen major sculptures constructed of structural steel and covered with mortar, are the work of one man – Simon Rodia. In 1921, Rodia purchased the triangular-shaped lot at 1761-1765 107th Street in Los Angeles and began to construct his masterpiece, which he called “Nuestro Pueblo” (meaning “our town”). For 34 years, Rodia worked single-handedly to build his towers without the benefit of machine equipment, scaffolding, bolts, rivets, welds, or drawing board designs. Besides his own ingenuity, he used simple tools, pipe fitter pliers and a window-washer’s belt and buckle. The tallest of his towers stands 99½ feet and contains the most extended slender reinforced concrete column in the world. The monument also features a gazebo with a circular bench, three birdbaths, a center column, and a spire reaching a height of 38 feet. Rodia’s “ship of Marco Polo” has a spire of 28 feet, and the 140-foot long “south wall” is decorated extensively with tiles, seashells, pottery, glass, and hand-drawn designs.” 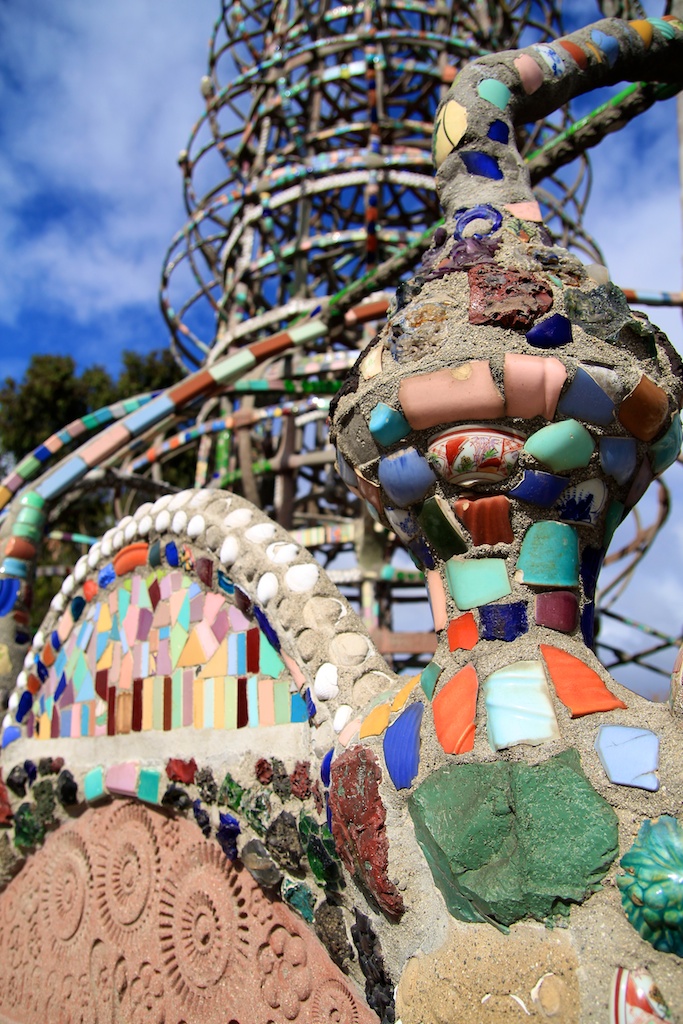 When you go on the tour, what is most interesting about the area is that this place was right next to his house. All but the entryway of his home burned down, but you can see that he literally started building the towers 5 feet from the side of his house.

Also, the towers are built in the outline of a ship, and the ship is pointing back to Italy. It was said that he did this so that when it was time for him to sail back to Italy, he would have all of his possessions and memories with him. The exterior of the structure has a wave-like art to show that the ship is in motion, and between two of the three towers is what Simon liked to call the sail. 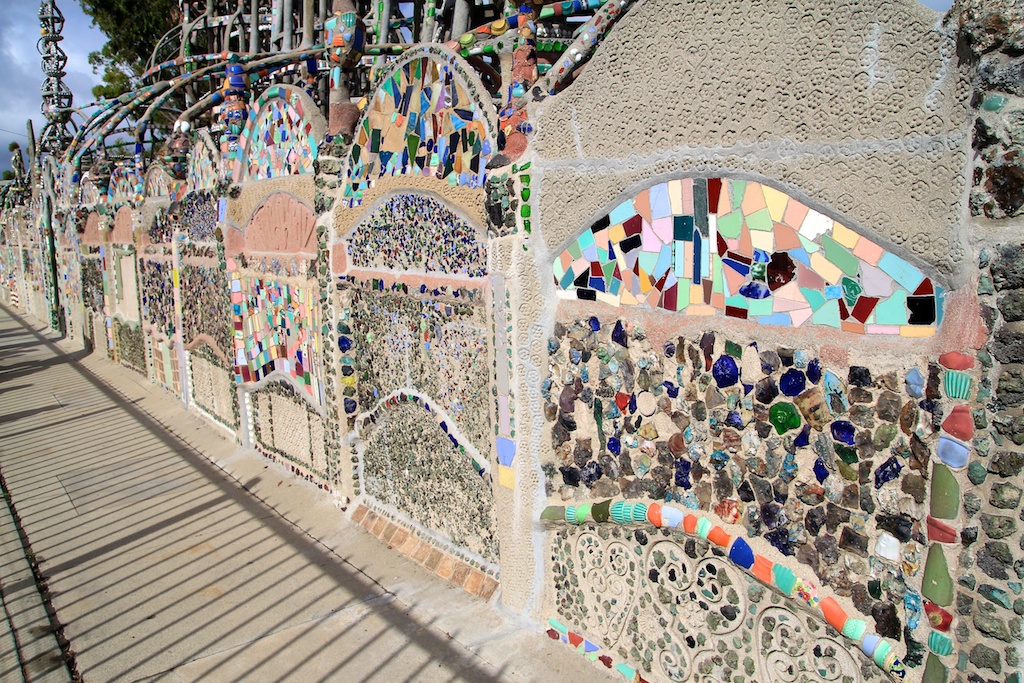 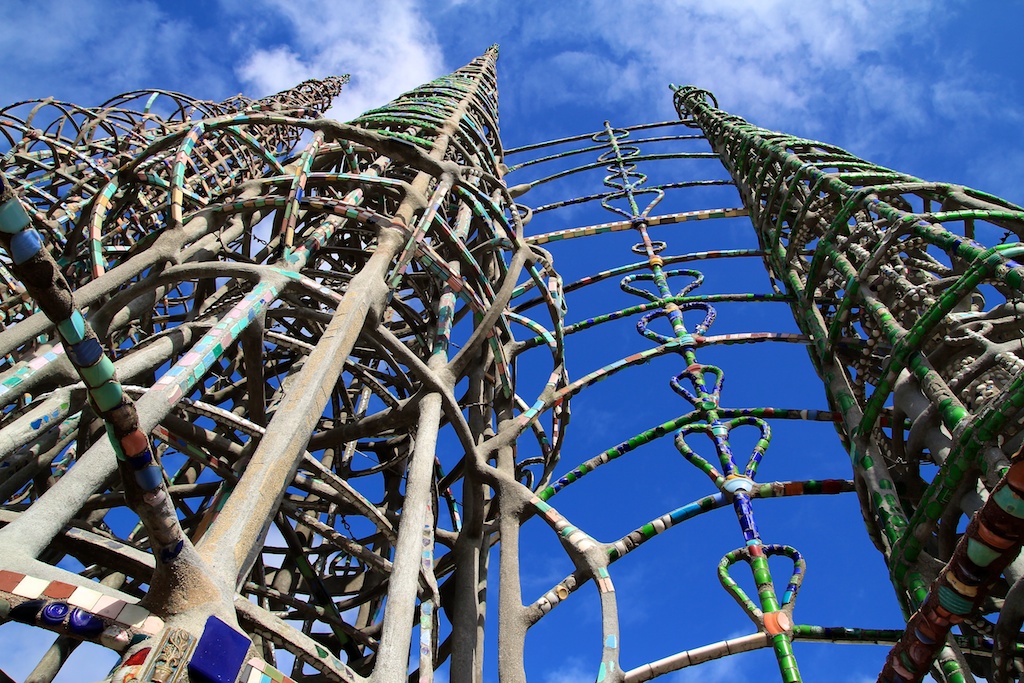 You can see that this piece of art was added to as it progressed. It is truly amazing to walk around in this man’s creation, and it reminds me a lot of my trip out to Leonard’s Salvation Mountain in the Salton Sea.

The seven dollars is well worth the price of the tour, and you will want to spend even more time looking around the towers; unfortunately, when the tour is over, you have to leave, so make sure you get your pictures while it is going. There is even a baptism pool right in the middle of the area. 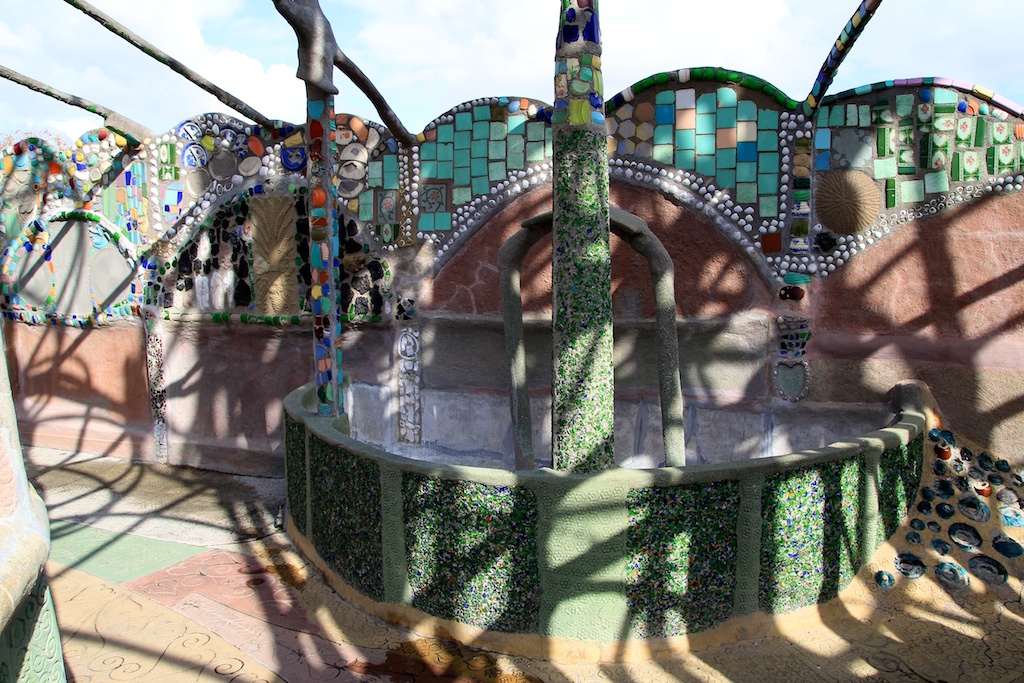 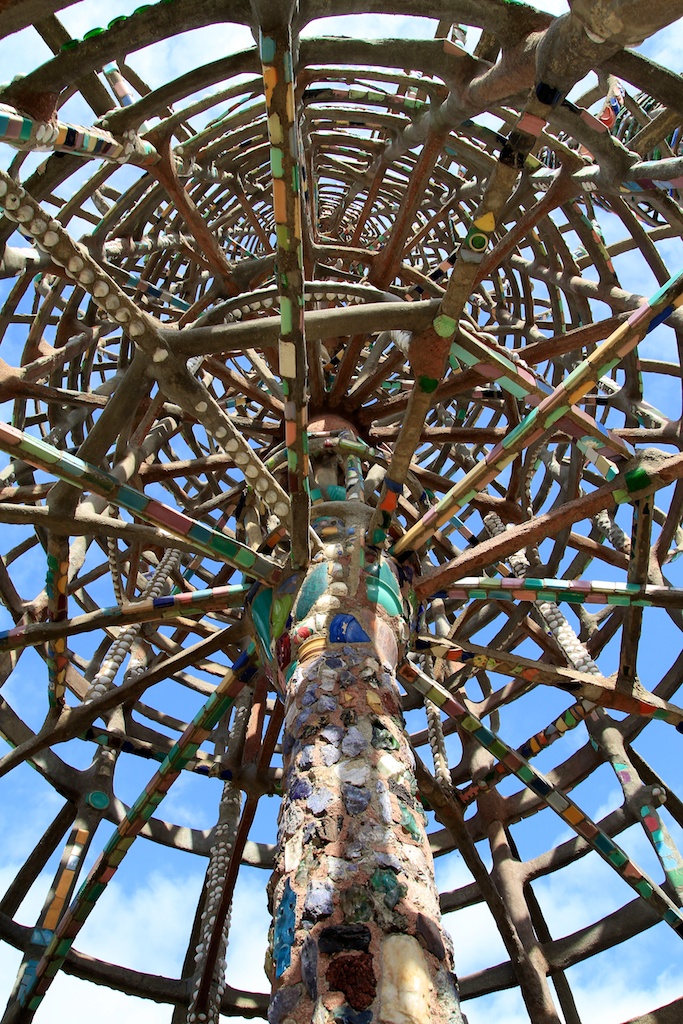 Also of note, the area all around the towers from when you get off the freeway till when you arrive is pretty sketchy. I wouldn’t want to be driving around there at night or have my car break down, so know that going in. Other then that, it is a beautiful piece of history that is worth checking out.