Mission San Diego de Alcala was founded by Father Junipero Serra and was the first of the 21 California missions created. Because of that, it is a place of significant historical value to visit in the state of California. The mission was established in its original location (near the Presidio) in 1769, but it was moved to its current location in 1774. It was then burned to the ground during an Indian attack, in which the first US Christian martyr was killed, Padre Luis Jayme. This mission is the start of a great road trip to visit all of the California Missions, which you can read about here, or just a unique spot to explore on its own to get a good understanding of California history. Read on for all the information. 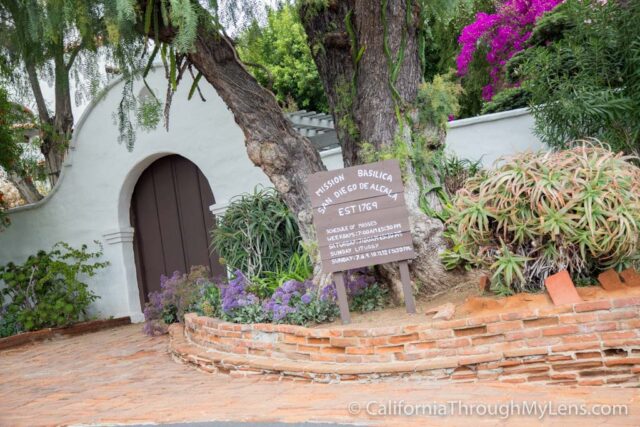 The mission is located off the same exit as Qualcomm Stadium in the north part of San Diego. There is a small parking lot below it and a few street spots near the mission as well. 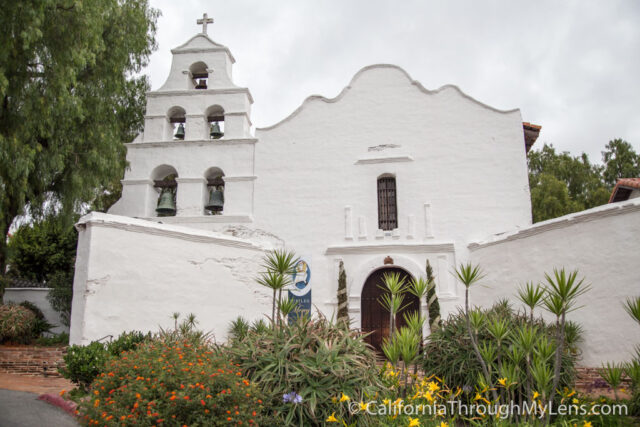 The mission facade is the first thing you will notice as it has a commanding presence with its large bell tower and beautiful, clean white style. 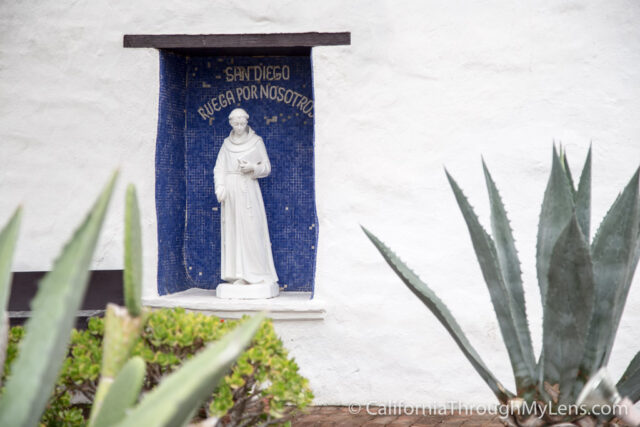 There is a plaque below it that signifies the start of the mission trail and that it is the first of the California missions. From here, you can enter the gift shop to pay your fee and visit the mission. 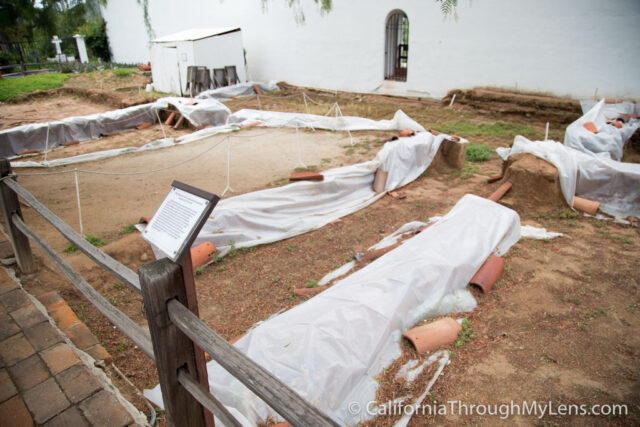 The first area you will enter is the courtyard, which is large but not as beautiful as the groomed ones at other missions. It does have a few spots to see though. 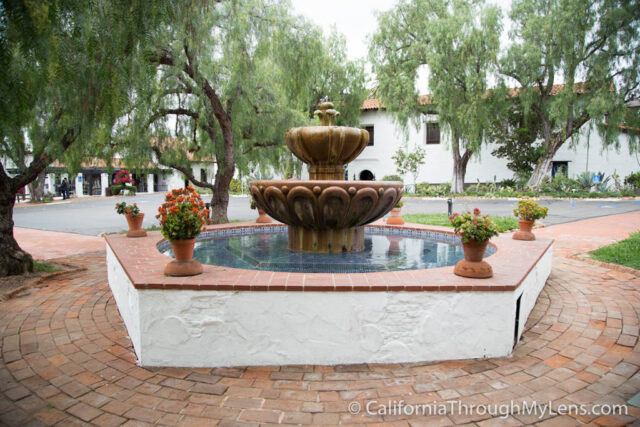 First is the large stone fountain that sits right in the middle of the courtyard. It didn’t have any water flowing in it when I was there, but it was still pretty. 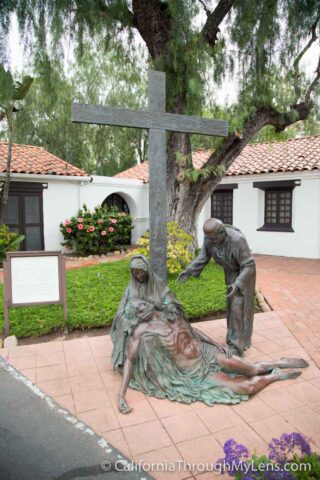 Next, there are a few statues that decorate the courtyard that you can view. 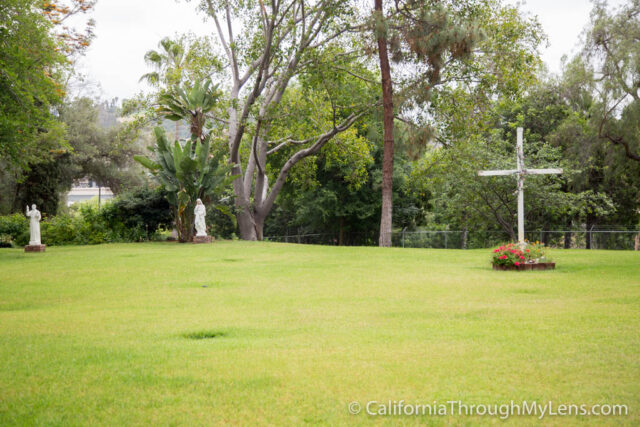 On the southwest corner, there is a gate that blocks you from entering the cemetery, but you can see it through the gate. 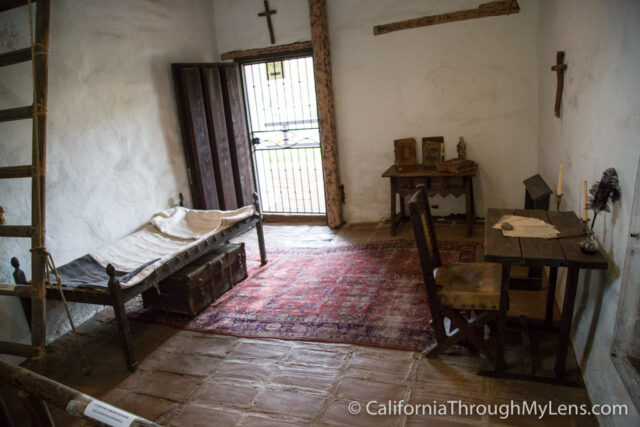 On the southeast end, there is an example of what a room looked like from when the Padres lived here. It was well kept and is a great way to get a better understanding of what life for the Padres was like. 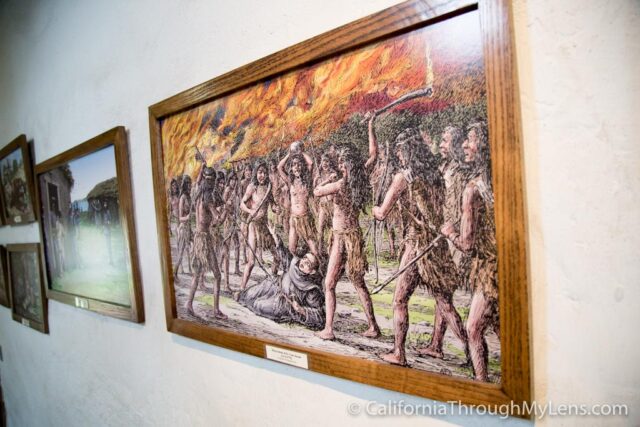 Along the wall in the Padre’s room, there are a few paintings dedicated to Padre Jayme, who was the first martyr and who died here. 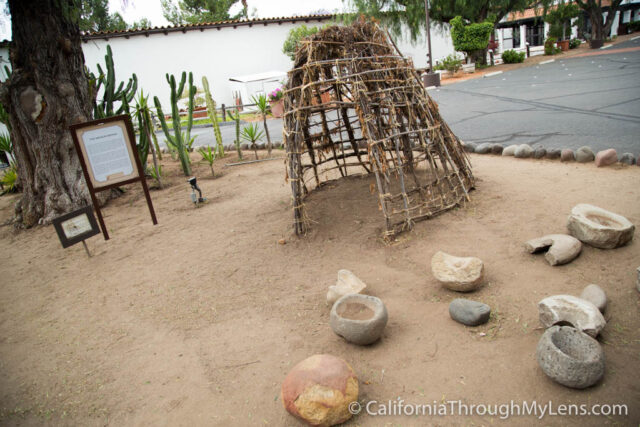 After leaving the courtyard, you will enter the chapel. 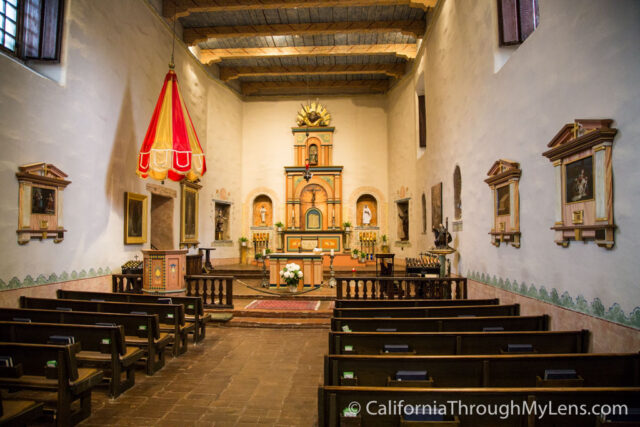 The chapel is not as ornate as other missions, but it has a calm beauty that you will see when you visit. It was very dark when I entered, and I was the only one there on a Monday morning. 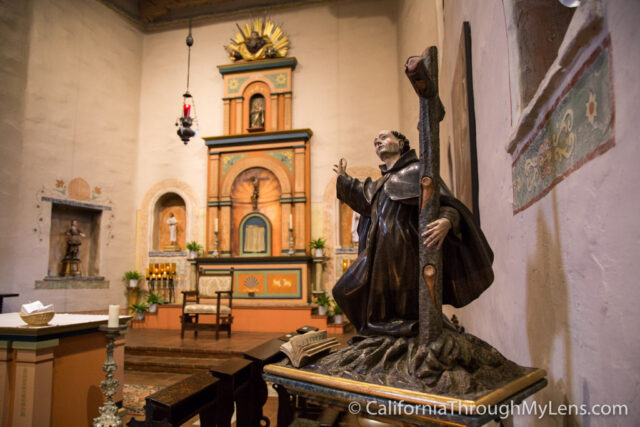 The altarpiece is beautiful as well, with a few scattered statues and gold pillars. 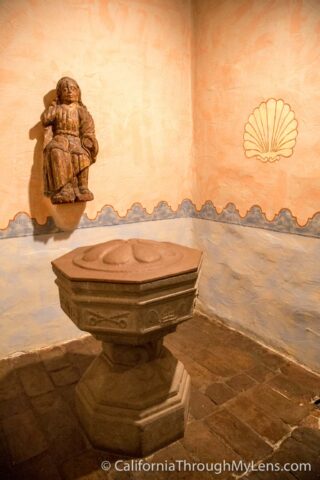 In the back, there is a baptismal. 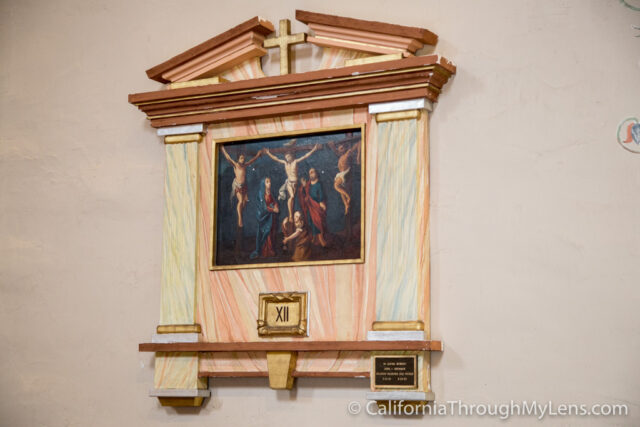 After exiting the chapel, you will reach my favorite part of the mission, the garden. 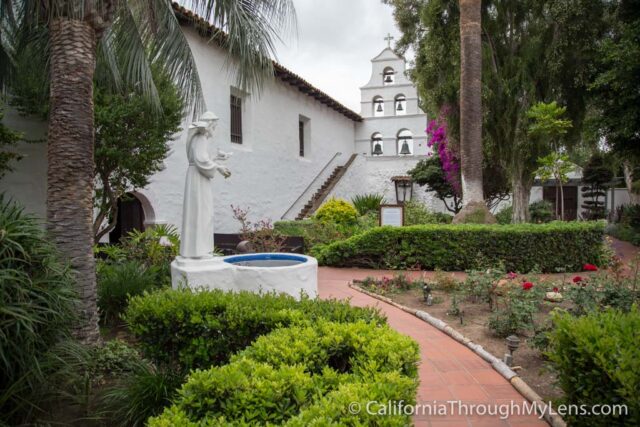 The garden at Mission San Diego is immaculate with tons of well kept colored flowers and rows of pathways all looking up at the bell tower. 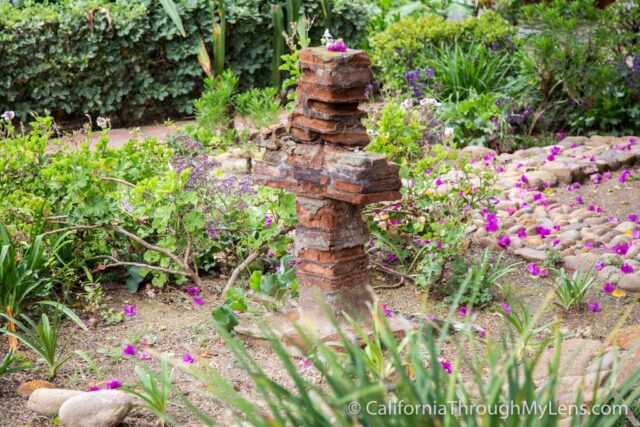 This is one of those spots you will want to take your time is as it is serene and peaceful. 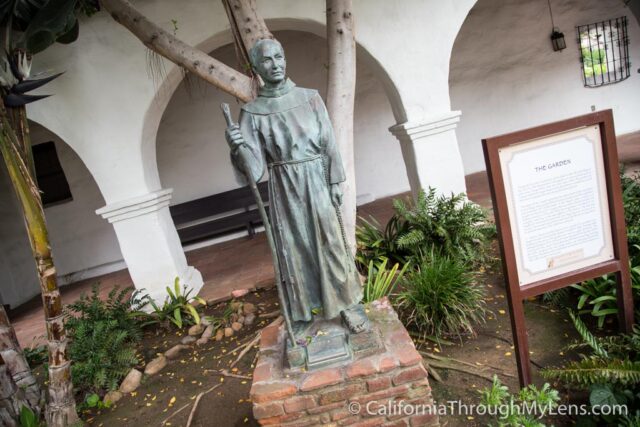 There is a statue of Father Serra here that you will see at every one of the California missions as well. 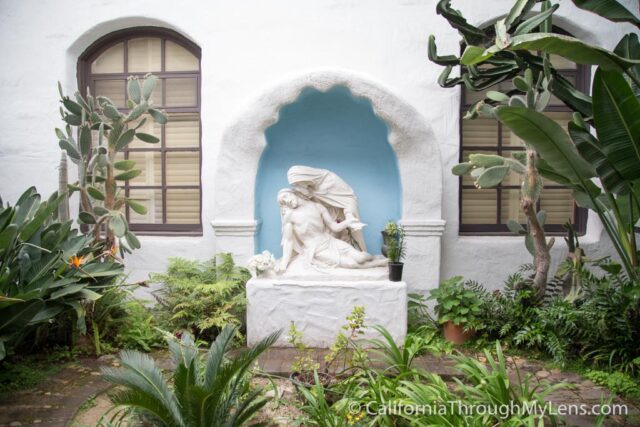 In the middle of the garden, there is a fountain that adds to the area’s appeal.

After exiting the garden, you will head into the Pieta Garden, which is full of massive cacti. I think some of them may have reached 20 feet tall; it was crazy. 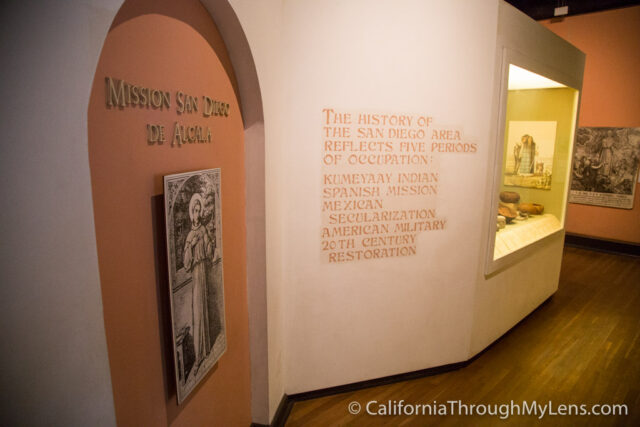 From here, you head into the museum, which is a small, one-room area but which has a lot of great visuals. There is an area dedicated to the Indians in the area. 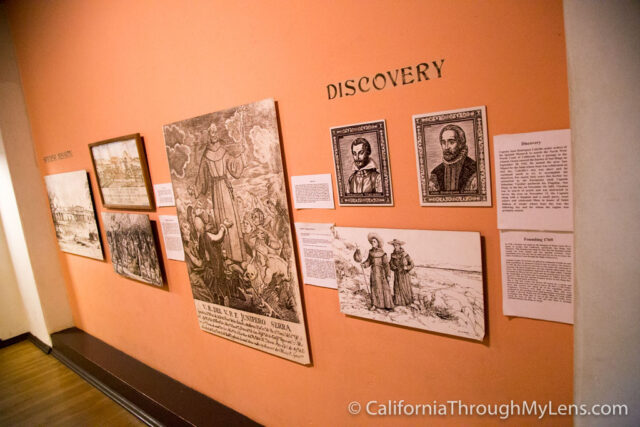 There is also an area that shows some of the sacred relics from when the mission was actually in use. 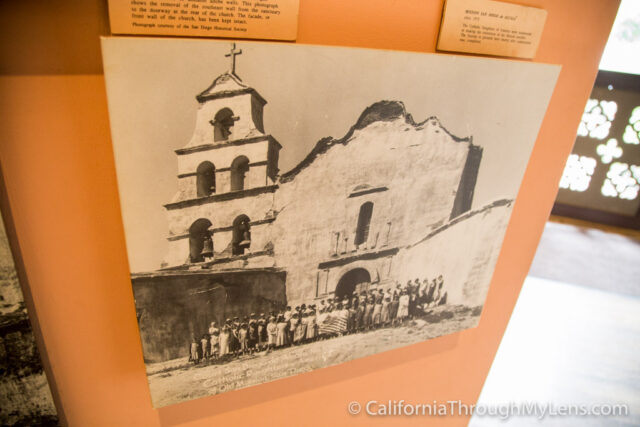 The museum is nice to see, but there isn’t a lot there. 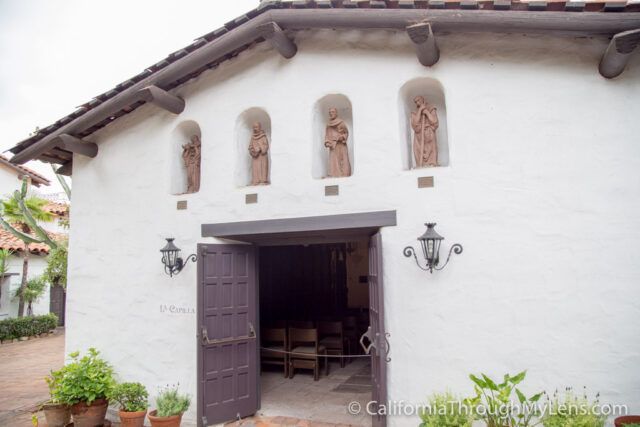 On the way out, don’t forget to stop by La Camilla, which is the smaller chapel off to the side and which has immaculate old choir stands to see. 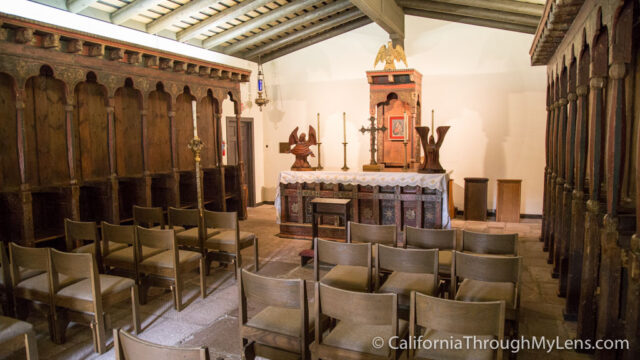 When you are done, you can head back out of the gift shop and back to your car. All in all, this is a beautiful mission and a great one to visit for the history it provides. If you want to visit all of the California missions, then check out the guide I wrote here. Be sure to leave a comment below with your thoughts on the mission as well.