Mission San Carlos Borroméo del río Carmelo was the second mission founded of the Alta California Missions. It became a critical building for the success of the missions and, ultimately, the headquarters for the expansion of the ministry under Father Serra. The mission was founded in 1770 and became a National Historic Landmark in 1966. If you are traveling the coast, then you really should carve out some time to visit this mission, here are all the details. 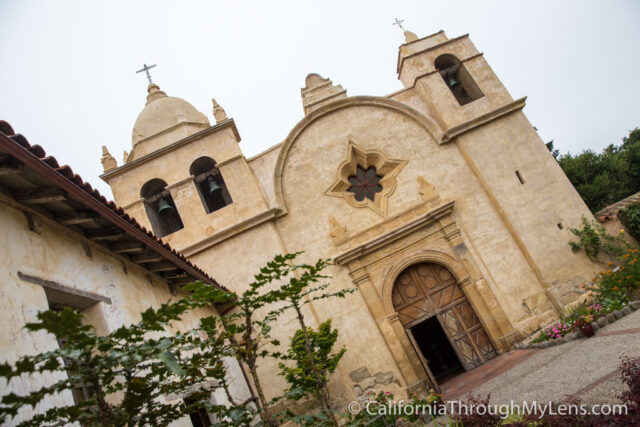 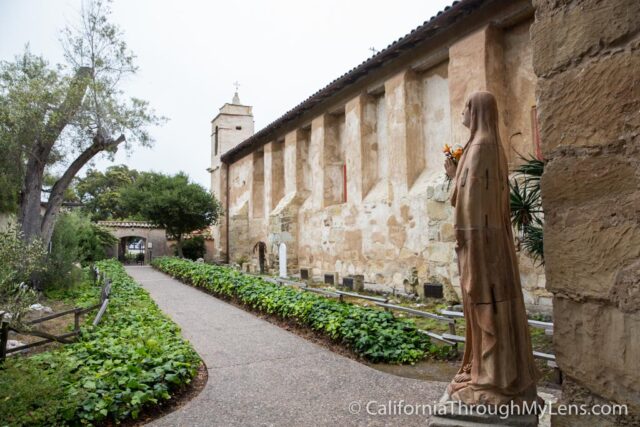 Mission San Carlos Borroméo del río Carmelo is located in the southern part of Carmel-By-The-Sea, only a few minutes off Highway 1 on Rio Road. There is a large parking area for the mission. 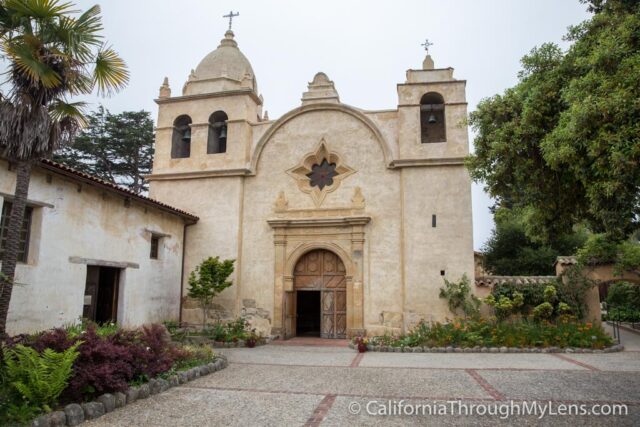 After paying the fee, you will walk into the small courtyard and see the Basilica, which is one of the most beautiful of all the missions. 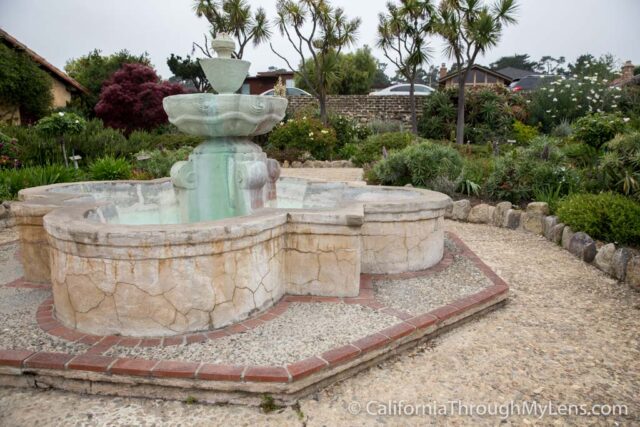 This area is also home to a fountain and a lovely garden that you can walk through. 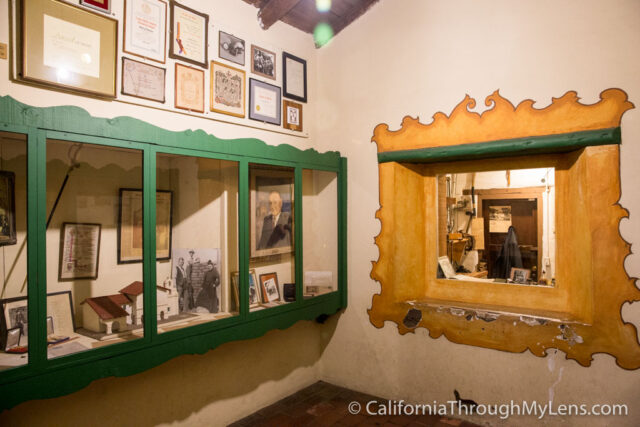 There is a small museum room with a video on Father Serra in the garden as well and a few artifacts from the area. 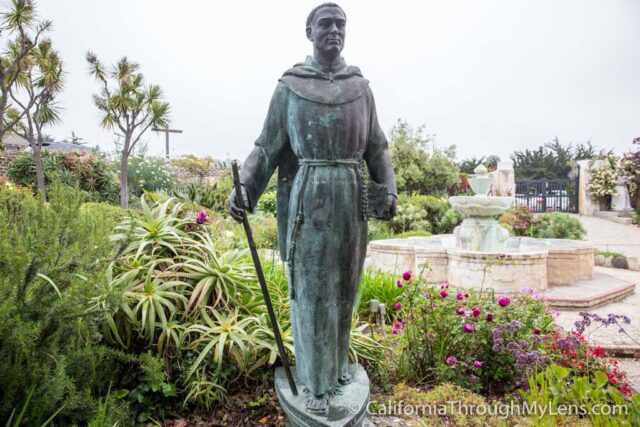 Of course, there is the statue of Father Serra that you have come to expect at each of the California missions too. This mission is of particular importance when talking about Father Serra as it is his final resting place. 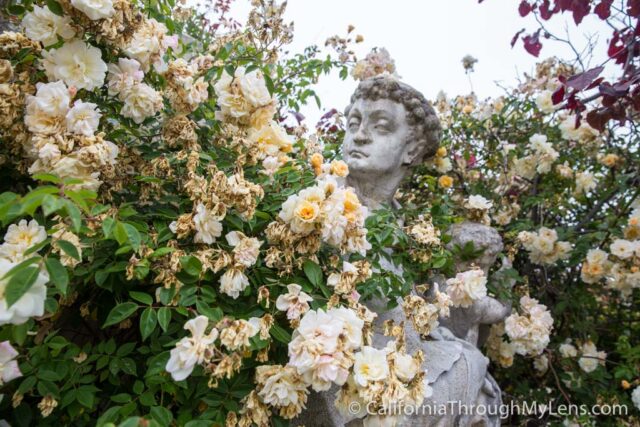 After continuing around to the right of the chapel, you will reach the cemetery. 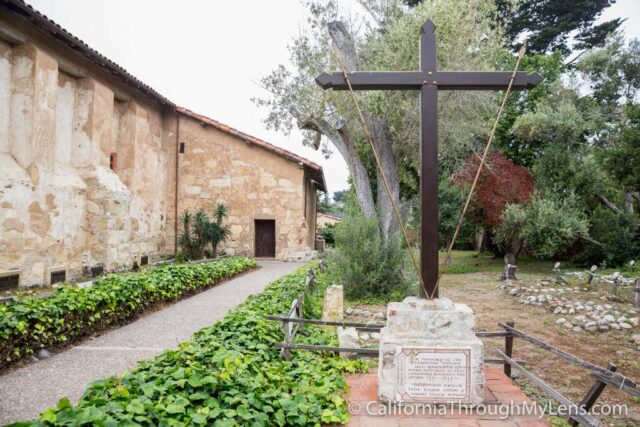 The cemetery is along the entire side of the mission and has a lot of unique gravestones with some ornate ones and some that are just small crosses. 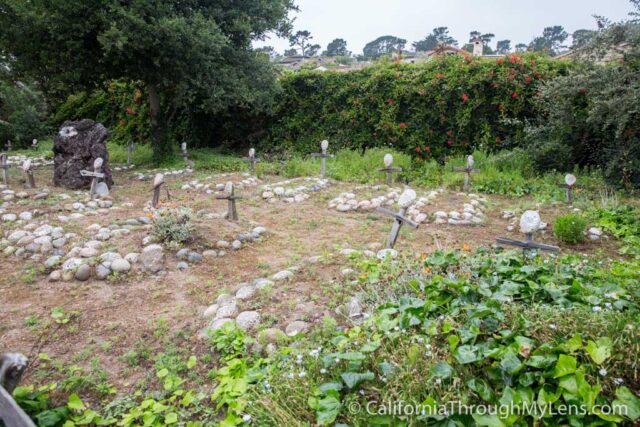 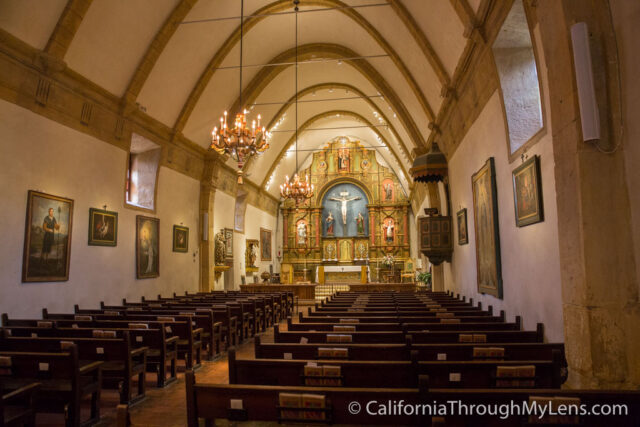 The chapel is one of the most beautiful of the 21 California missions. 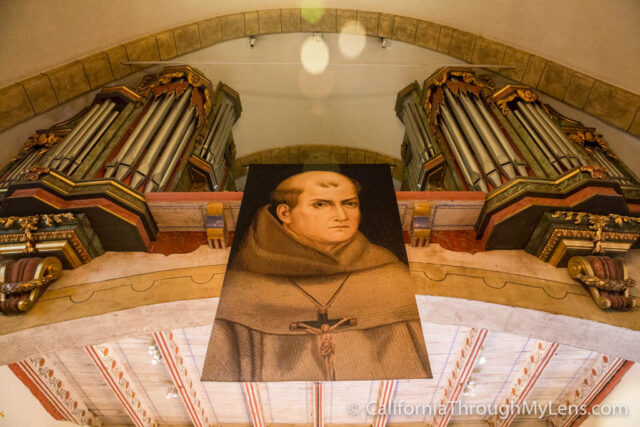 The ceiling is rounded, which is unique to this mission, and the chapel itself is vast and could fit a lot of people. 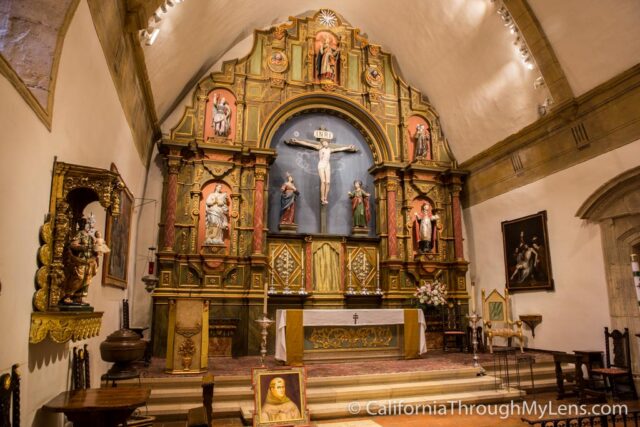 The chapel features a summer solstice window in the shape of a star. During the summer solstice, the light dances across the alter as it comes in through the star. Unfortunately, it is often foggy in Carmel, so actually seeing this only happens every five years or so. 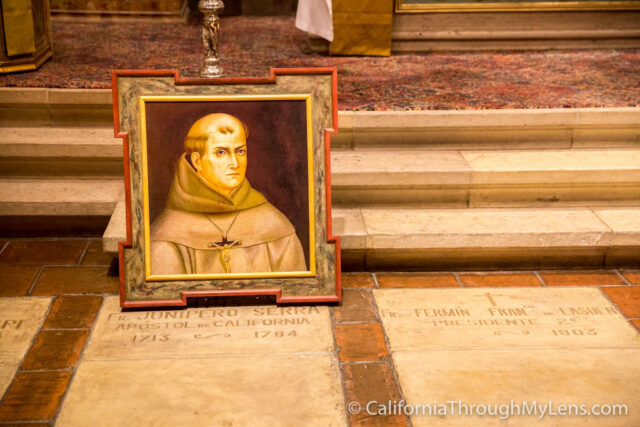 The chapel is also the final resting place of Father Serra, who was responsible for founding the first 9 California missions and who is honored with a statue at every mission. His grave is under the main altar. 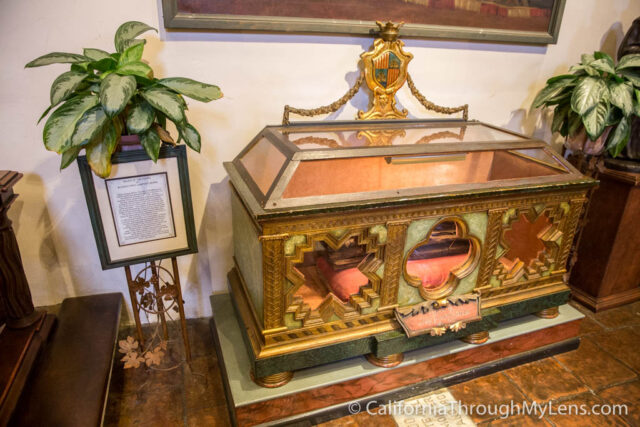 They even have wood from the original coffin he was buried in that was dug up to verify it was him over 60 years ago. 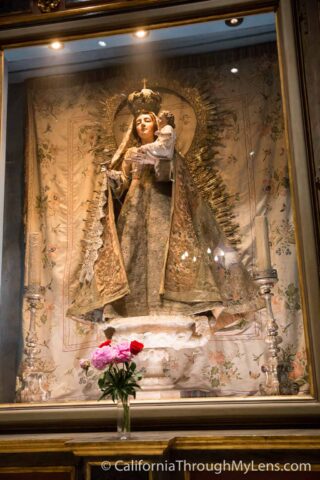 Off to the left of the chapel, there is an area dedicated to Mary, which houses a statue that Father Serra brought over when he came to California on his first trip. It was lost for a long time before eventually being rediscovered, after which this altarpiece was created to hold it. 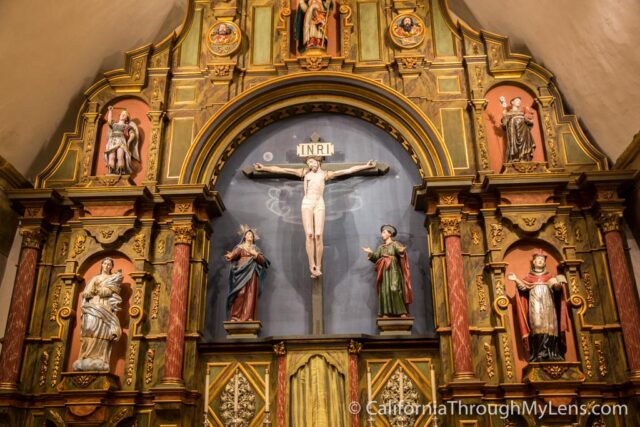 After exiting the chapel, you will proceed into the museum, which is one of the better ones I saw at the California Missions. 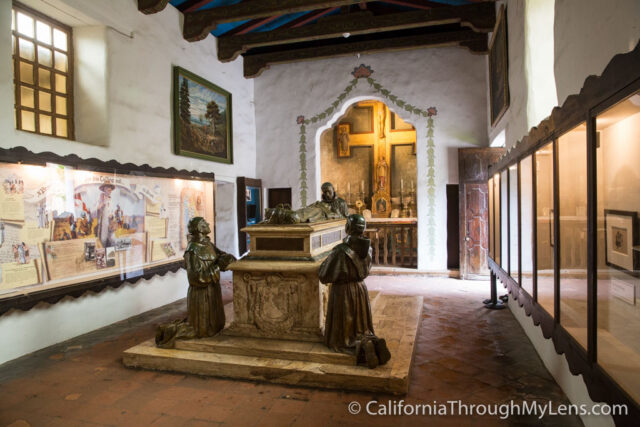 The first room has a massive stone sculpture and coffin that was designed to be where Father Serra was buried. When it couldn’t fit into the chapel, it was decided that it should just be on display here. 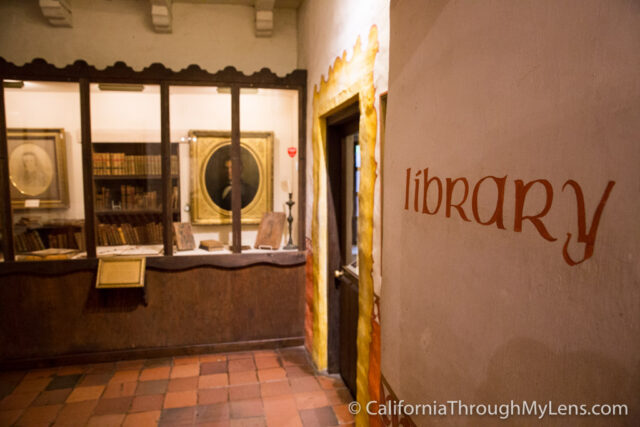 There is also a sizeable glassed-in exhibit that features many of Father Serra’s items and church relics. 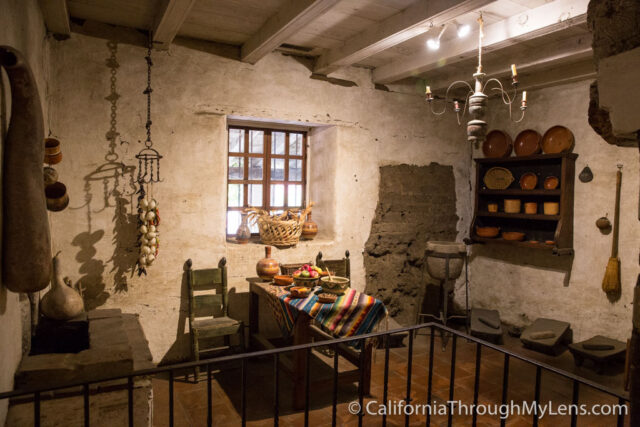 The museum continues with more artifacts and relics in the next room, as well as a viewing portal for the Grand Sala. 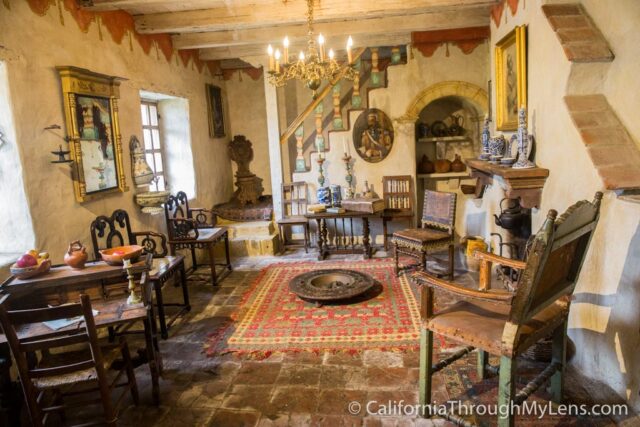 This room has been meticulously restored to show what it would have looked like when it was being used. It was created to be the reception room for the mission. 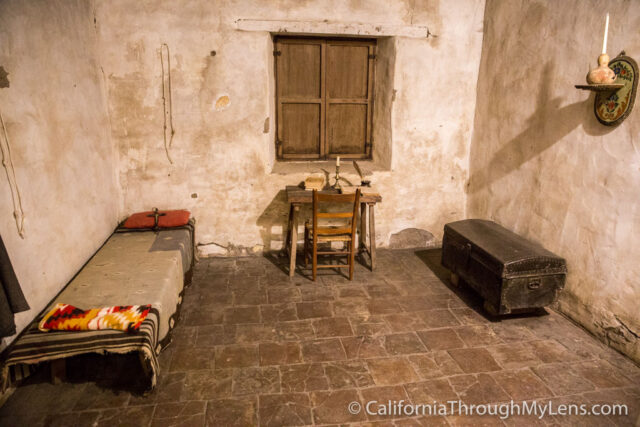 Continuing on, near the end of the museum, you will see Father Serra’s room furnished to look like it would have when he was there. I found it interesting to see so much about how he lived here. 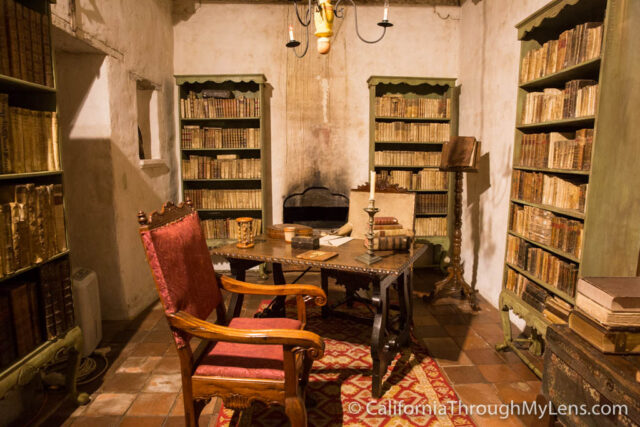 After exiting the museum, you will be back in the gift shop and can proceed out from there. I think you can usually visit the courtyards as well, but they were off-limits when I went. 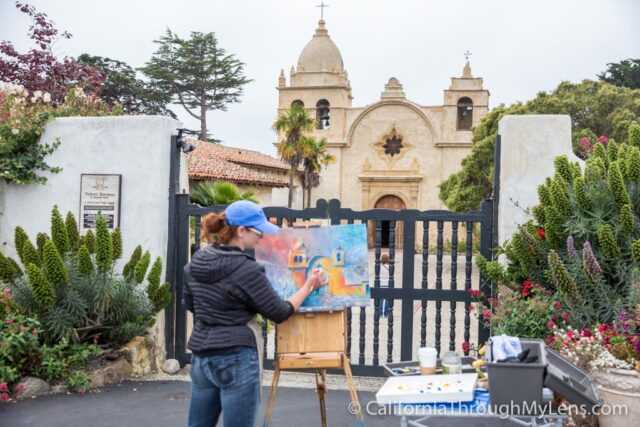 I do have to note that when I visited, there was a painter there working on a painting of the mission. I talked to her for a while and thought it made a great photo to show her painting with the mission behind it. Her name was Julie Khyler.

All in all, this is one of the best of the California Missions; it is incredibly beautiful and has a lot of incredible history. Be sure to visit it if you are in the are, and you can read all about my time at the missions here.