I don’t get up to Northern California more than a couple of times a year, so I have been waiting for about three months to see the ridiculously amazing McArthur-Burney Falls. I had seen tons of pictures and only hoped that when I saw it in real life, it would be as impressive. I couldn’t even believe how much more amazing it was in real life. The pictures are great, but this waterfall has to be seen to be believed. 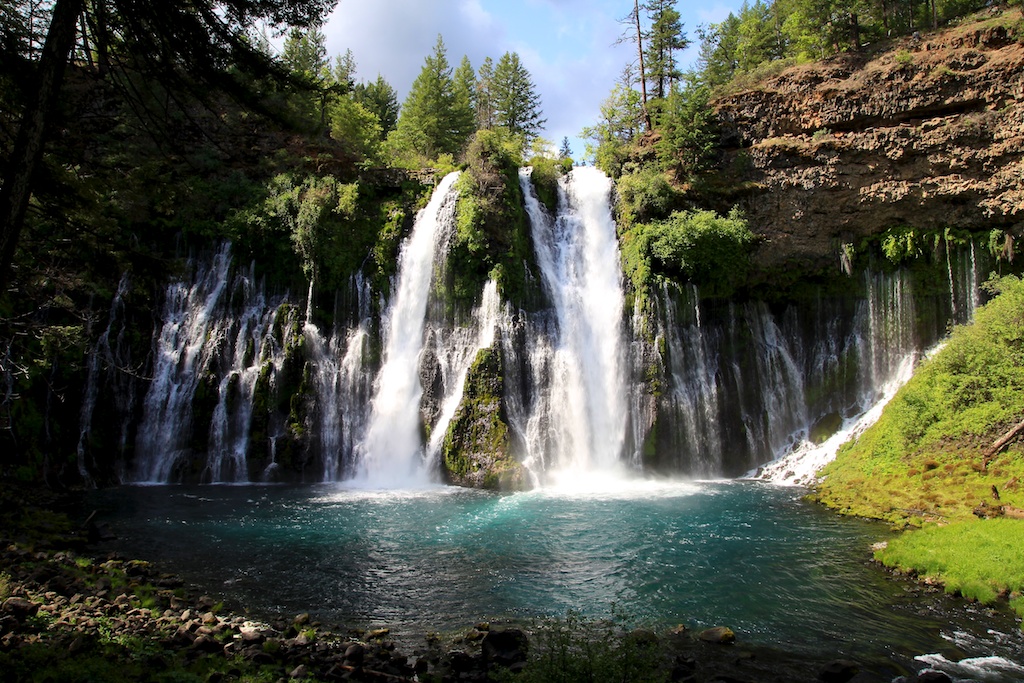 I have seen a lot of waterfalls in my life. I have been blessed to be able to travel a lot and have seen everything from the mud falls of Ethiopia to Multnomah in Portland. I have to say though, this is one of the more amazing waterfalls I have seen. The falls appear like something out of a National Geographic, and the blue water below makes you feel like you have left California. I mean the state park is pretty much wholly based on this waterfall as there is not a lot else to do there, but boy is the 8 dollar entrance fee worth it. 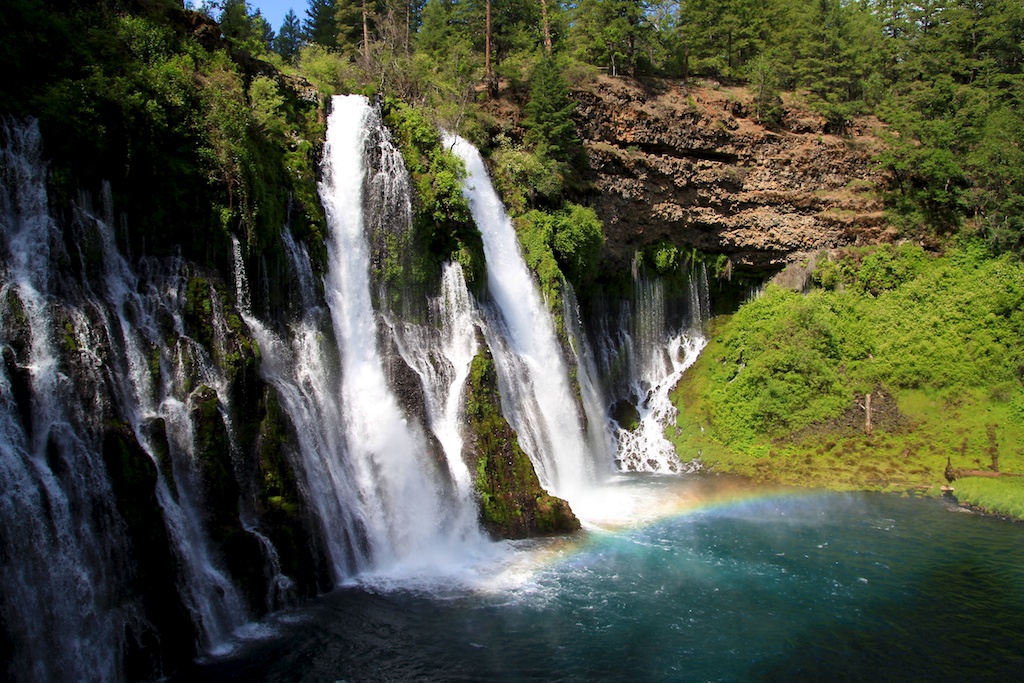 The state park in which Burney Falls is located is about 45 minutes east of the town of Redding. You drive on the two-lane Highway 299 most of the way, and when I did the run in the morning, I only saw a handful of cars. At Highway 89, you will head north, and after about 8 miles, you will see the turn for the falls. The parking lot itself is a hundred yards off the road, and after paying the 8 dollar day use cost, you can enter the park. There are bathrooms and two gift shops near the parking lot, as well as a handful of campsites further down. From the parking lot, you proceed less than 50 feet before you get to the falls overlook. 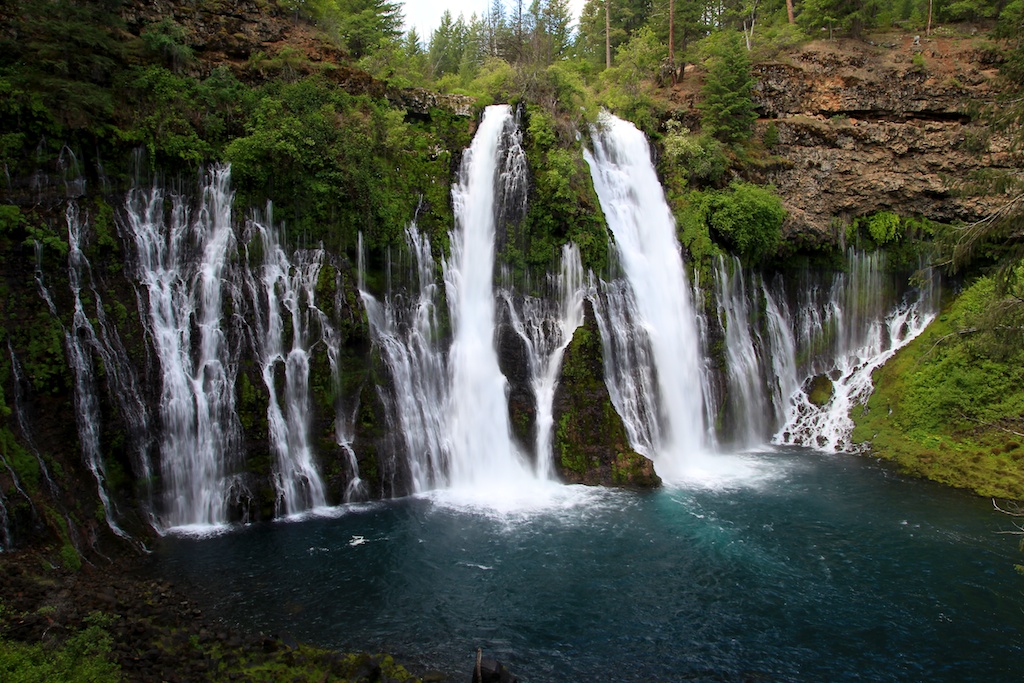 The waterfall itself is vast and has both an upper and middle flow of water. The middle flow is fed by an underground river that runs below the creek above. This is what makes the falls stand out as you see water coming from the top but also out of a dozen holes right in the middle of the falls. 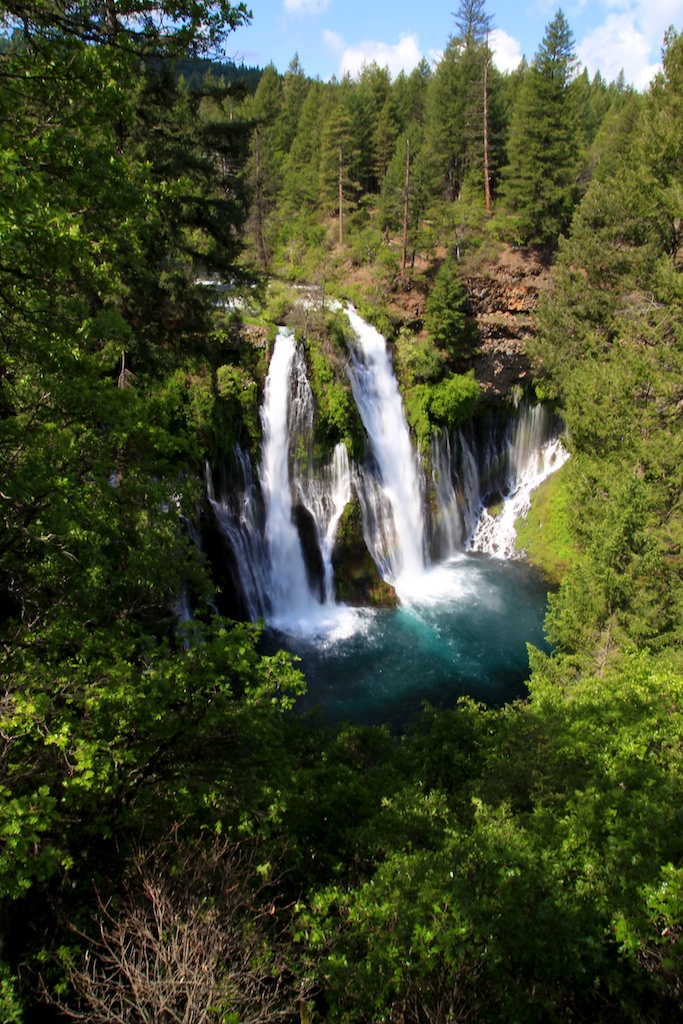 The falls themselves are about 120 feet, and you will want to plan on a decent amount of time here just walking around and soaking everything in. They even told us that the falls do almost a constant flow rate of 100 million gallons per day year-round.

If you are feeling more adventurous, then you can take the 1.2-mile loop that takes you to the base of the falls then up around the backside before it returns you to the parking lot. This trial is an excellent idea as it gives you a lot of views of the falls that you do not get from above. It is a mile, but the trail is not very difficult, so most people shouldn’t have a hard time doing it. Plus, it looks like the below picture, so even the trail is beautiful. 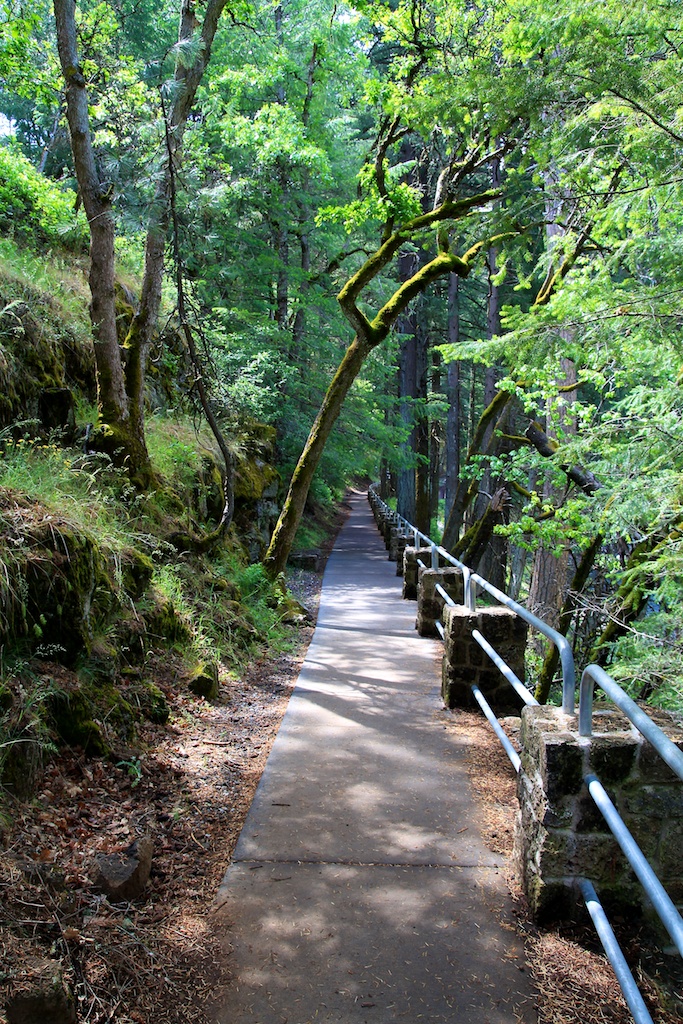 If you are wondering whether you can get in the water, there is a sign saying that you cannot. I saw people walking down there, but it is not recommended, and I never saw anyone get in the water. 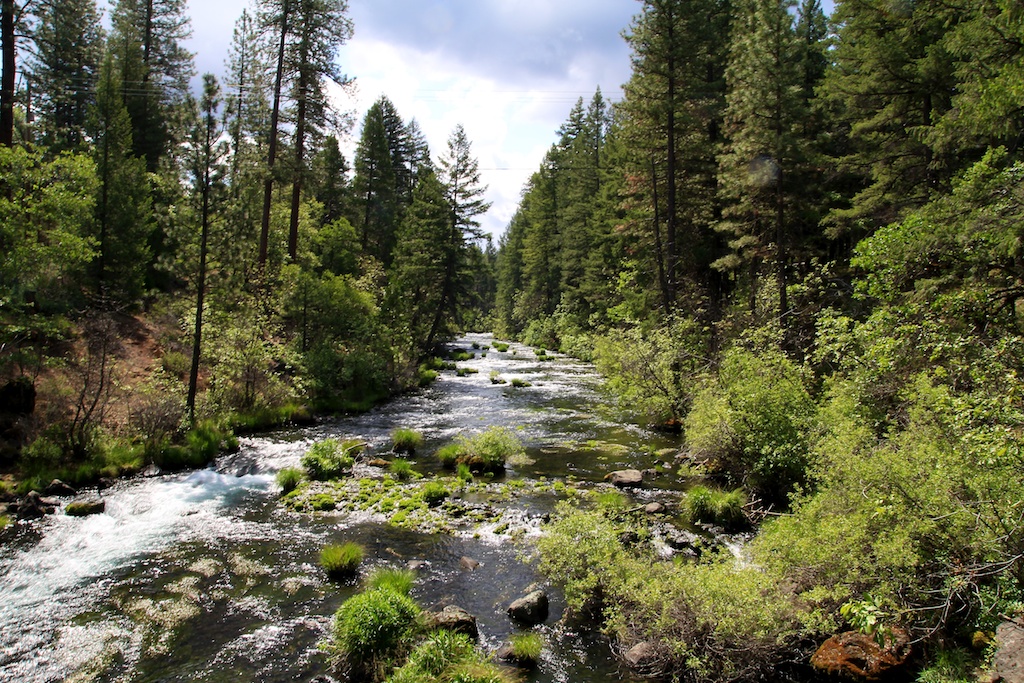 After completing the loop through some beautiful forest, two bridge river crossings, and a field of moss-covered rocks, you will arrive back at your car, hopefully as ecstatic as I was to see something as beautiful as this. It is said that Teddy Roosevelt dubbed this place “the eighth wonder of the world” when he saw it for the first time. 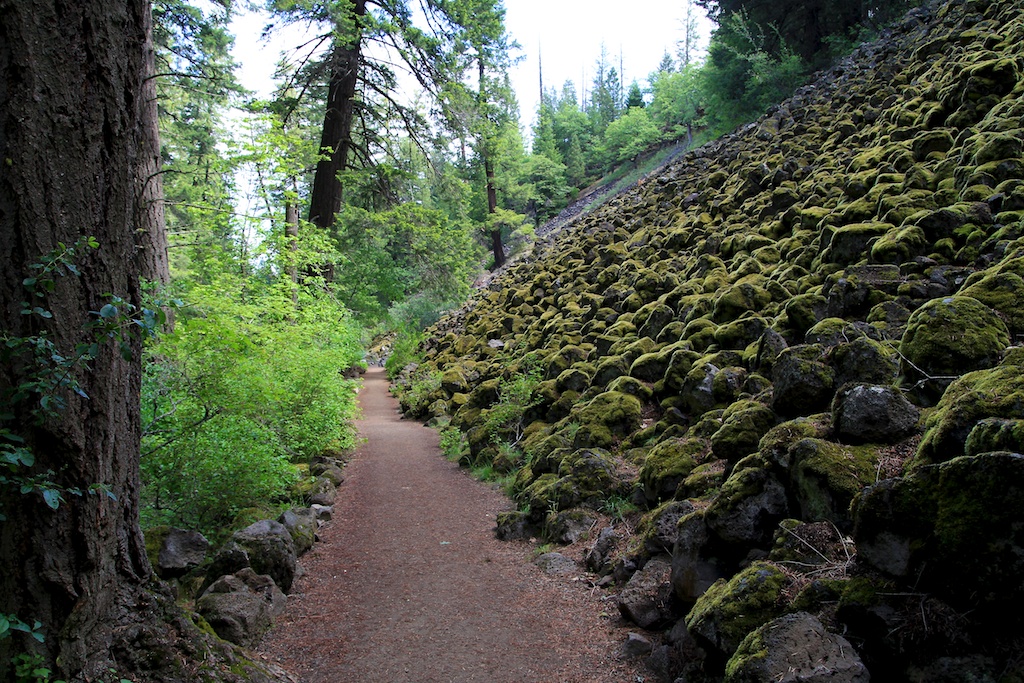 So all this to say you need to see this waterfall, it is that awesome. 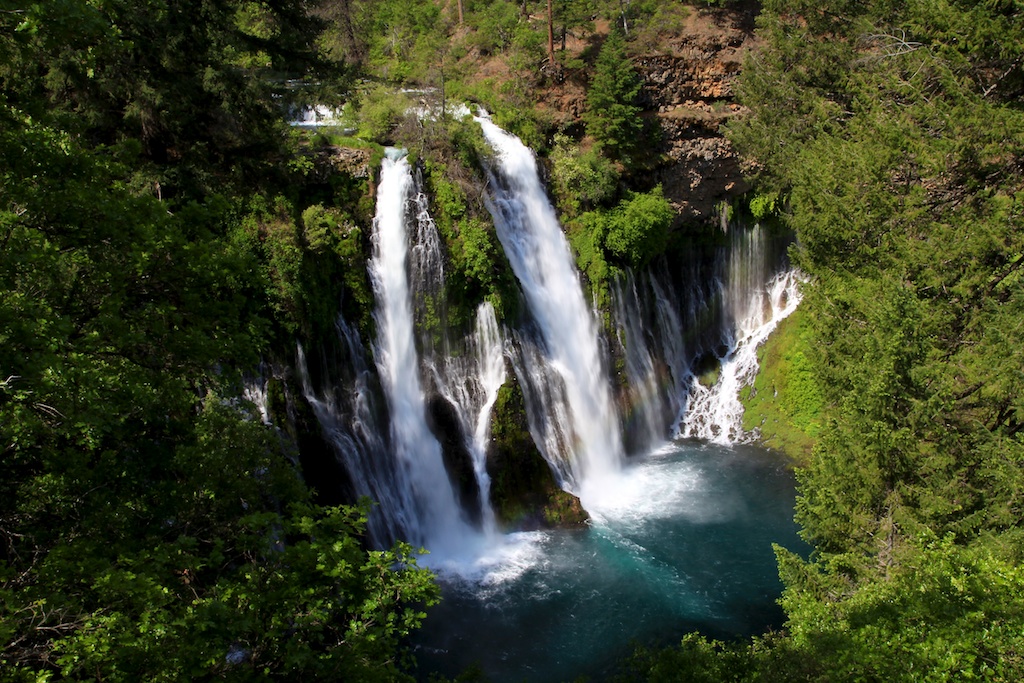 Let me know if you have any questions in the comments.